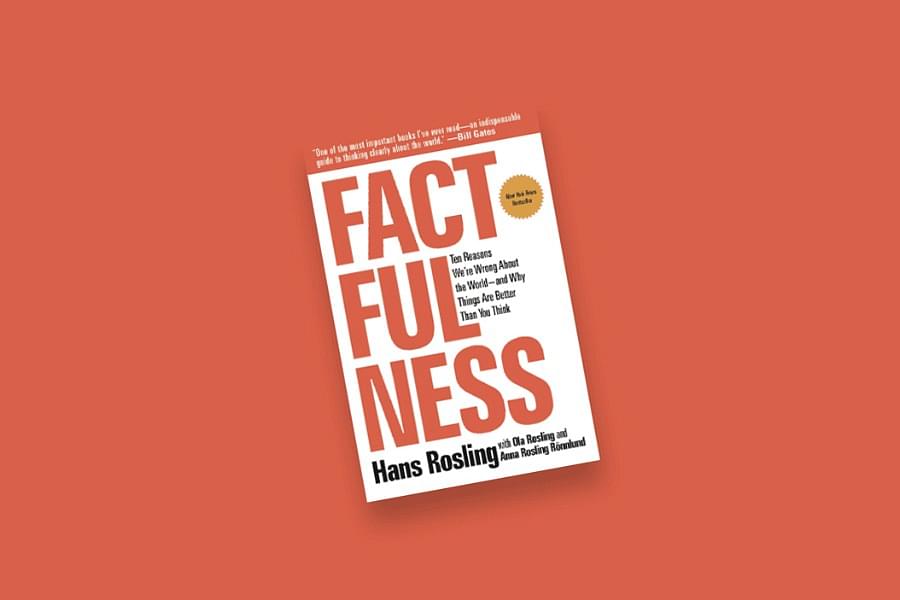 Former British prime minister Benjamin Disraeli is attributed with saying that there are three kinds of lies: lies, damn lies and statistics. It is hard to argue with this statement especially when we live in a world that’s ostensibly “post-truth” and replete with “alternative facts”. The astonishing rise of social media and its viral nature has made believing any statistic an exercise in critical thinking. And yet, debates are held, opinion pieces written, policies made, laws passed, funds raised, agitations organised on the basis of dramatic rhetoric laced with anecdotes and noticeably devoid of facts and critical thinking.

And while statistics are pliable, facts aren’t. Facts are inviolable, immutable, stubborn and certain. One’s predilections cannot, sadly, alter facts. And for every fact, there can be multiple opinions. So, what is one to do? And how does one understand “fact” and “multiple opinions”?

Enter Factfulness by Hans Rosling, published posthumously. The Swedish doctor, public health researcher, statistician, lecturer, sword swallower (yes!) and circus lover burst on to the global stage with his incredibly captivating data representations on global socio-economic metrics. His TED talks, accompanied by his excited commentary, are stunning examples of how facts can be visualised and need to be understood. His wide experience across many countries and cultures, curiosity, insight and search for facts from across the world — including from his student days at St Johns Medical College in Bangalore India — are brought to bear in this, his final book. His Gapminder Foundation, started alongside his son Ola and daughter-in-law Anna, developed the Trendalyzer software (now part of Google) that produced the stunning data visualisation on development.

This book seeks to measure ignorance and provides reasons why we are ignorant. And the “we” here includes Nobel laureates, world leaders, researchers, students and regular people. And how consistently and systematically people across the world give wrong answers to questions such as “how many years have 30-year-old women worldwide spent in school (30-year-old men have spent 10 years in school worldwide)”, or “how many people around the world have some access to electricity”, or “how many girls finish primary school in low income countries”, or even, “what’s the life expectancy of the world today?” These questions have three options each and yet the scores are devastatingly wrong. In fact, so wrong that a chimpanzee would do better by choosing randomly and while its errors would be split equally between the two incorrect answers, human errors were all bunched in one direction!

Rosling then proceeds to provide 10 reasons why we’re wrong.

The Gap Instinct to see the world in an “us” vs “them” manner, neatly boxed into two categories, eg “developing” and “developed”, isn’t helpful. Rosling shows how there are two clear middle categories between the two extremes where the majority of the world lives. He visually demonstrates, with impact, the four socio-economic levels that exist, rather than just two, and the consequences of those levels on the people and how we view the world. The dangers of looking at averages rather than the ranges, focusing on extremes and not on digging down into the data to unearth facts are reinforced.

The Negativity Instinct, where we believe, or even want to believe, negative news. Even when presented with “good news”. The idea that things are “bad but better” than they were in the past is lost on most people. The tendency to look at the past with rose-tinted glasses (when low life expectancy, wars, disease, poverty were more rampant), the non-stop media propagation of negative news (“more news of suffering doesn’t mean there’s more suffering”) and that gradual changes aren’t noticed are to blame for this.

The Straight Line Instinct is one of the more dangerous extrapolations we can make, by assuming that the past is the predictor of the future and just extending the line without taking into account the various variables that impact the outcome. There are different curves — S-curves, humps, doubling, slides — that need to be examined with the data to arrive at facts. For example, rising incomes, widely available and usage of contraceptives and women’s education lead to lower births per woman. In 1972, Bangladeshi women had, on average, seven children and life expectancy was 52. Today, the average Bangladeshi woman has two children and a newborn can live up to 73 years. Egypt in 1960 had a child mortality rate of 30 per cent in the areas around the Nile and, today, thanks to better education, primary healthcare, safer drinking water and malaria eradication, has a child mortality rate of 2.3 per cent, lower than what France and the UK had in 1960!

The Fear Instinct brings out the evolutionary aspect of survival. We focus on the frightening (a perceived risk), not necessarily the dangerous aspect (real risk). The media plays its role in drumming up fear — partly because of its own ignorance, partly because of its need to grab attention for its own survival — and the attention filters determine our response. Natural disasters, plane crashes, murders, nuclear leaks and terrorism all receive disproportionate attention — none of them kill more than 1 per cent of the people who die each year from other causes like disease.

The Size Instinct looks at the tyranny of big numbers when seen in isolation or without context. Numbers should be always compared with context. Great examples of CO2 emissions (absolute versus per capita), the Vietnamese view of the Vietnam War versus their war with China, and deaths due to diseases over the years and in context provide a sobering touch to headline grabbing numbers.

The Generalisation Instinct forces us to seek out comfortable averages. When in fact we should be looking at variations within groups and for similarities across groups, not just at differences across groups. Dramatic imagery or anecdotes might be compelling for media but not for factual understanding. There are some thought-provoking examples of chemophobia — fear of chemicals — and how we jump to conclusions (great examples of home building in Tunisia and of a lift incident in a hospital in Kerala) without questioning our beliefs.

Our Destiny Instinct makes us immune to slow changes — social, economic and cultural. And like in evolution, slow changes over periods of time lead to dramatically different and large results. The importance of continuously updating one’s own knowledge and not be stuck with a static image is stressed. Very interesting examples from conversations in Hong Kong, a conference in Africa and an encounter in Mozambique. And how 15 per cent of the earth’s surface is protected today and increasing when for thousands of years there was no protection.

A call for being humble, looking at the underlying causes of data that lead to facts, testing, and to beware of simple ideas and simple solutions is made in the Single Perspective Instinct. Ideologues and experts suffer from the single perspective problem — where understanding of complexity, combinatorial ideas, humility and context are absent. Cuban and US healthcare systems are examined.

Polish disease, German disease, French disease, Italian disease were all names that syphilis was called by in other countries except in the country of the eponym! The Blame Instinct is the natural urge to blame others and claim more power and influence than warranted. The tendency to seek out villains not causes, seek out heroes instead of systemic solutions involving institutions and technology leads us down this path. There’s a delightful anecdote about a Catholic nun in Tanzania and condoms that showcase the nun’s focus on solutions.

Taking drastic and urgent action without pausing to consider facts and data is the result of the Urgency Instinct. Doing something without adequate thought, examining the data and planning leads to unhappy consequences. A dramatic confession by Rosling about his unintended role in the deaths of some African women and children from 35 years ago to the behaviour of activists and others with regard to the Ebola virus or climate change advocates provides insight into this Instinct.

Rosling also however worries about five risks, namely, global pandemic, financial collapse, a new world war, climate change and the extreme poverty that still afflicts 700 million people. One wonders what instincts in him drove these worries!

The book is dedicated to “the brave barefoot woman, whose name I don’t know but whose rational arguments saved me from being sliced by a mob of angry men with machetes” and in the final chapter “Factfulness in Practice”, he explains the context from 1989 in the very poor Makanga village in remote Bandundu region of what is now the Democratic Republic of Congo. “I have found fighting ignorance and spreading a fact-based worldview to be sometimes frustrating but ultimately inspiring and joyful…” Fact-based worldviews are useful, less stressful and more hopeful than the dramatic worldview. “The world isn’t as bad as it seems and we can see what we have to do to make it better.”

The book is written in a very readable way, devoid of jargon or expert speak or the liberal sprinkling of celebrity names (he meets with Fidel Castro). Unlike other books of this genre, this book has endorsements by only two people namely, Bill and Melinda Gates. “One of the most important books I’ve ever read — an indisputable guide to thinking clearly about the world” is how Bill Gates describes it. The book lives up to this ringing endorsement. It is humble, confident, honest and personal — there are numerous interesting anecdotes from his life — and self-deprecatory. Organised in simple chapters with charts, data and yes, facts! There’s a wry, matter-of-fact touch of wit that underlies the material. The book ends with an Outro (as opposed to an Intro) and is written by his son Ola and daughter-in-law Anna about the last days of Rosling and the publication of this book.

This is a must-read book for us in India. Especially for those in media, civil society and policy formulation. An India, that, thanks to digital initiatives, is becoming data-rich before it becomes economically rich, that needs data and a fact-based worldview to find solutions to the issues of health, education and poverty. For too long, the 10 instincts in the book have reigned without challenge!