One Social Entrepreneur To Create Many 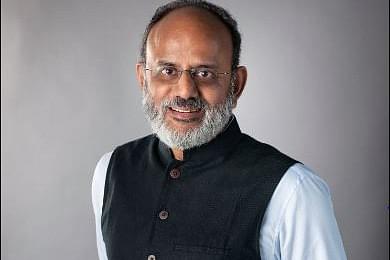 Hari Kiran Vadlamani ... on a mission

Hari Kiran Vadlamani (55) is a venture investor and a social entrepreneur. His flagship initiative is the rapidly growing Indic Academy (IA), a not for profit that seeks to create a renaissance based on our civilisational thought. IA has incubated, nurtured and supported several own, associate, and independently managed platforms that are focussed on specific verticals/aspects of our knowledge systems and culture. Vadlamani is currently raising two funds, the ‘Indic Renaissance Fund’ (IRF) and the ‘Indic Impact Fund’ (IIF). Whilst IRF’s mandate is to invest in not-for-profit platforms, IIF is a social impact fund that invests in ventures that make a return whilst making a social impact.

Deeply passionate about our art and culture, he strongly believes that Indian thought and soft power has a crucial role to play in meeting the global challenges of health, sustainability, and peace, especially during the likely upcoming social upheaval resulting from artificial intelligence (AI)-led joblessness. Founder investor of Swarajya, we caught up with him to chat about the growth of Indic Academy.

How would a Hindu intellectual ecosystem look like, according to you? What are the foundations and what would be the outcomes of such an ecosystem?

The foundation of such an ecosystem is the creation of a “cultural biosphere” where all the participants are interdependent and every participant, however small, has an important role to play. Multiple networks will exist for them to connect, cooperate and collaborate with one another and multiple platforms will thrive giving these participants an opportunity to express themselves.

From being a tourist or an observer to our own ancient wisdom and traditions, we begin to live and celebrate our heritage. Culture once again becomes an integral part of our daily lives. Every thought, word and deed becomes a manifestation of the divinity within us. The foundation of the ecosystem will be “intellectual” but the outcome would be “emotional and devotional”. That will be the marker for an Indic renaissance.

As a private individual and entrepreneur, you are playing a very important role in building and nourishing a Hindu intellectual ecosystem. Can you elaborate on everything that you are doing towards achieving that goal?

The vision of IA can be described in three words “self, selfless, self.” IA seeks to transform public intellectuals to thought leaders by enabling the discovery and nurturing of the potential within their self, and from thought leaders to social entrepreneurs by orienting them to offer their knowledge as a product, service, or an experience in a self-less fashion and finally discover his or her true self whenever they are ready to pursue the path of liberation.

Towards this mission we have established three verticals “scholarships and grants”, “courses and programmes” and “networks and platforms”. Over the last three years, several initiatives have been taken under each of these verticals, details of which can be accessed on our website. Most importantly, ours is a collaborative model of working with multiple organisations. We strongly believe in a culture of interdependence. Any ecosystem has both living participants and non-living participants. The non-living participants of an ecosystem are the infrastructure pieces which IA is trying to establish by incubating our own or in association with others or in some cases supporting independent efforts.

The living participants are the thinkers and public intellectuals for whom we exist. We ourselves do not have any view or opinion and seek to remain neutral to diverse opinions. Our role is to support all scholars, conduct programmes and create neutral networks and platforms that offer an opportunity to multiple points of view. Indic thought is about diversity and plurality and we seek to embody this in our efforts. We see ourselves as a skill development corporation and a social incubator. Towards this end, we are seeking to establish a campus for training public intellectuals as well as establish two funds — a renaissance fund that supports not-for-profit initiatives and a social impact fund that invests in ventures that make a socio-cultural impact while making a return on investment.

There is a relentless assault on our ‘Hindu’ identity, nation, culture and civilisation. In the 1980s, Vishva Hindu Parishad came up with ‘Garv se kaho hum Hindu hain’. That slogan struck a chord. It also tells us how bad the situation was. Even today, there is a hesitation in embracing the word ‘Hindu’ fully. In this light, when we see our foremost intellectuals dumping ‘Hindu’ for ‘Indic’, one wonders if it’s somehow a result of the residue of the same hesitation. Or is it not the case? Why are we using the word ‘Indic’ and not ‘Hindu’?

My social media profile (I am no longer on Twitter and Facebook) described my identity as a Hindu and the profile on my blog and wherever I register I clearly mention this. I see nothing wrong in stating your belief system upfront. Words change their meaning and connotation over the years, and unfortunately the current usage of the word Hindu is restricted to a religious connotation in an attempt to bring it on par with other religions.

Whilst everyone realises that being a Hindu is a way of life encompassing multiple facets, the use of the term has been given a restrictive meaning for quite sometime now. On the other hand, all aspects of our culture, which have a scriptural basis, are removed from its roots and practised; be it Yoga, Ayurveda, Vedanta, Karma Yoga, performing arts, visual arts, craft, meditation or environment. Our culture is consumed globally but neither the service providers nor the consumers acknowledge its roots in Hindu scriptures. The reasons for this is already researched and documented by public intellectuals like Shri Rajiv Malhotra.

It is in this background that the use of the word ‘Indic’ has come about and understood. Indic seeks to communicate historical, civilisational and cultural aspects that have been deliberately removed from the word Hindu not by us but by the Leftist academics. When we are fighting a civilisational battle, we must use the language that is most effective for communicating our viewpoint.

IA’s primary goal is to reach out to the lost generation of millennials who are products of the deracinated post-independence education system as well as global non-Indian consumers of our thought and culture. Today, these millennials and global consumers are in fact seeking products, services and experiences that are authentic, and in a couple of decades when the links between their consumption and our scriptures are re-established, you would not need to raise such a question. IA seeks to offer authentic wisdom from our scriptures by way of courses and programmes; and yes we are not the ones to say “Yoga is not Hindu!” So there is no question of ‘dumping’. Also I would urge you to look at my definition of an Indic and Indic thought. Only if you celebrate our civilisational continuity, identity and heritage, both intellectually and emotionally, will you be an Indic.

A big issue with the entrenched and incumbent left ecosystem is that it’s elitist and is dominated by the deracinated upper class and upper caste. Perhaps the reason we find so much cronyism, corruption and nepotism in media, arts, academia, popular culture, legal fraternity is because the ecosystem values connections over talent. How can the Hindu intellectual ecosystem avoid taking this trajectory?

IA’s focus is to nurture thought leaders into social entrepreneurs and offer their knowledge as a service with a focus on the customer. Connections can help you get the first gig in any field, it is the consumers that sustain you.

More than the issues you have highlighted, we suffer from an inability to think big and exponential and are too preoccupied with specific ways of doing things. Most of the thinking to revive or bring about a renaissance has already been done by several eminent stalwarts like Rajiv Malhotra, Koenraad Elst, David Frawley etc. What is required now is determined action on the ground, away from social media, grunge work that needs to be done, day in and day out. Unfortunately, we have too many public faces and too few backroom boys.

This in turn leads to internal tiffs driven by egos; a colossal waste of time and resources. At the end of the day, we are all activists working to preserve, protect and promote our heritage. If we simply learn and practise from the very same knowledge that we seek to fight for, then the issues you have highlighted will not arise. If we do not seek inner transformation whilst seeking external transformation, such effort is … wait a minute let me quote from your founder Rajaji in the introduction to Bhaja Govindam:

“When intelligence matures and lodges securely in the mind, it becomes wisdom. When wisdom is integrated with life and issues out in action, it becomes Bhakti. Knowledge, when it becomes fully mature is Bhakti. If it does not get transformed into Bhakti, such knowledge is useless tinsel…”

That is why I am wary of your usage of “intellectual” ecosystem. We have too many intellectuals! What we need are social entrepreneurs who offer their knowledge in the spirit of service.

A big obstacle, not perhaps to the building of a Hindu intellectual ecosystem as much as to sustaining it, is the primacy of the English language. It’s not only a big impediment to the democratisation of discourse but also a handicap for fresh talent from the countryside to make a mark and carve out its own space. In addition, the English language promotes a monocultural parlance, that too of the Western, Christian societies, not surprisingly, given it is their language. At the same time, we are robbed of the nuances of our own knowledge systems, languages, dialects, cultures, and stories. How can the Hindu intellectual system avoid all these pitfalls and emerge as an epitome of Bharatiyata?

English is useful as a transactional and a link language for governance, but for cognition and culture it is the mother tongue that is important. So there can be no renaissance without the revival of Bharatiya languages. My friend Sankrant Sanu is an active advocate of this. We have to bring back Bharatiya languages as an active means of cultural expression. At the Indic Book Club, we will be launching an initiative to translate all classics in Bharatiya languages and make them more accessible. But these initiatives are targeted at public intellectuals like you and me. Unless this is done in a systemic fashion by the government, we cannot make a large scale impact.