Race To The Front 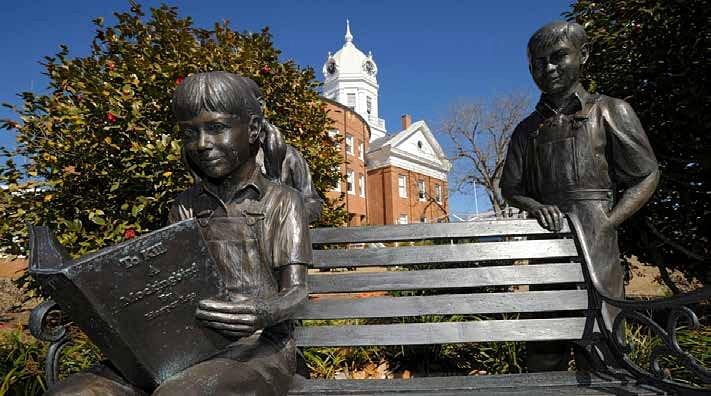 Fifty-five years after To Kill A Mockingbird, Harper Lee’s new novel comes at a time when the ghosts of the past are haunting America again.

In a newspaper interview earlier this year, American novelist Toni Morrison delivered what might be considered a stinging, brutal verdict on the subject of race. “I want to see a cop shoot a white unarmed teenager in the back,” she said. She went on to add that the day a white man was convicted for raping a black girl, racial inequities in American society could be considered over.

Morrison’s comment came in the wake of increasingly violent confrontations between the African American community and law enforcement officials; if its recent past was framed by Michael Brown’s death at the hands of a police official in Ferguson, Missouri, in August 2014, it ominously foreshadowed the carnage of the Charleston church, where on June 17, a young, self-proclaimed white supremacist gunned down nine people belonging to a Bible study group.

Go Set A Watchman, Harper Lee’s just published sequel to her 1960 novel To Kill A Mockingbird, might be remembered and remarked upon for any number of reasons, from the extraordinary circumstances in which the manuscript was discovered to the way Atticus Finch’s ramrod straight notions of social justice might have evolved over the two books. But if there is one overriding feature that dwarves all others, it is the book’s remarkable sense of timing (and we are far from suggesting editorial connivance here), and how a creative work could become the vehicle for such devastating irony.

If Lee’s masterful depiction of racial tensions and prejudices in Mockingbird turned it into a classic of the Civil Rights era, it is almost as if she waited for that moment in history when race relations had reached another intense peak to publish her second work. In as much as it complicates the character of Atticus and others in Maycomb, Alabama, Lee has quietly robbed Scout, here 26 and living in New York, along with her readers of a dependable moral locus, raising questions that are as pertinent to the Black Lives Matter movement now as they were to the civil rights movement then.

Scout, or Jean Louise as she is now called, returns to Maycomb in Go Set A Watchman, to visit her father Atticus, who is now 72 and suffering from rheumatoid arthritis, relying on the assistance of his stern and uptight sister Alexandra who has moved in with him. The ravages of time passing are visible elsewhere: Jem has died of a sudden heart attack, the old Finch residence has been pulled down to make way for an ice-cream parlour. Scout has an ongoing dalliance with her childhood companion Henry Clinton, who stays in Maycomb and works as a lawyer with Atticus.

Her first mistake is one anybody who has started living away from her birthplace and childhood abode is likely to make—despite her rejection of the parochialism of its inhabitants and her curiosity as to whether she will survive the place if she were to settle down there as a wife (what would she talk about with other wives, she would become Jean Louise the Silent), she does not want Maycomb to change. It is her symbol of fixity and order in a fast-changing world; on hearing from Henry that the last bit of land on Finch’s Landing has been sold, she remarks, “I just don’t like my world disturbed without some warning”.

Her world, of course, is about to implode all round her, with her discovery that both her father Atticus and her lover Henry are part of Maycomb’s citizens’ council that is advocating continued segregation, and they participate in its proceedings where vitriolic speeches peppered with racial invectives are delivered. Pamphlets expounding on the inferiority of the Negro people are now standard reading material for his father and aunt, the sort that “makes Dr Goebbels look like a naïve little country boy”. Their feelings are largely echoed by the people all around. Jean Louise is frantic for answers but no one seems to be able to provide her one, it seems to her that “blight” has “come down over the people she loved”.

Her revulsion is emotional, intellectual and physical: she retches in disgust, her moral core shaken by the fact that someone of the stature of Atticus, whose “private character was his public character”, who had memorably argued “equal rights for all, special privileges for none” while defending a Negro youth against false accusations of rape, has betrayed her so. Those around her are sympathetic to her moral dilemma in varying degrees.

Her aunt feels Jean Louise is too full of New York to appreciate what is really going on in Maycomb. Henry, her lover, is cagey about rebelling against local sentiment and losing his hard-earned place in society in the process. Her uncle, though spare with the truth, tries to convince her about the merits of the struggle, about the South’s need to preserve a distinct cultural identity without being force-fed a way of life it isn’t used to. “…all over the South your father and men like your father are fighting a sort of rearguard, delaying action to preserve a certain kind of philosophy that’s almost gone down the drain”, he tells her. That Jean Louise’s steadfast refusal to even acknowledge the other point of view is no less a sign of bigotry, both her father and uncle are at pains to point out.

Jean Louise finds her answers, but the process that aids this discovery has hardly elicited much discussion. For snugly fitted into the larger impersonal narrative of race relations is an intimate narrative, where Jean Louise aka Scout Finch finally comes of age. It must be remembered that Go Set A Watchman was written before Mockingbird, with Lee discarding the former draft in favour of the latter on her editor’s advice. One has little choice left here but to doff the proverbial hat at the editor’s dexterity, not only in noticing that young Scout was a more vibrant creature than her adult version but also in displaying (possible) foresight that coming-of-age depends on a linear progression of time and cannot work in reverse.

Comfortably grounded in the conviction that her father was the one steadfast standard-bearer of what was right and just, Jean Louise had never learned to sift through and ground her own beliefs. And just as she cannot outrun the history of the South, she cannot keep worshipping her father forever. As her uncle tells her, “our gods are remote from us…they must never descend to human level”. The transformation of Atticus from a god into a flawed but sincere human being is now complete.

In keeping with the spirit of the publicity campaign, Go Set A Watchman has more curiosity value than literary merit. The book reads like a first draft, devoid of emotional complexity with a greater emphasis on the thrashing out of ideas than on the fleshing out of character. Yet the tone of pathos is unmistakable: we are not just mourning the passing of an ideal moral order symbolised by Atticus, we are mourning it in the shadow of the dead bodies of Emmet Till and Michael Brown and countless others who never got a taste of the moral victory that Atticus had ensured for Tom Robinson.

In an article published recently in The New York Times, poet Claudia Rankine talked about the “absurd stuckness” of Black life in America, the sense that blackness continued to remain associated in people’s minds and imagination with “inarticulate, bestial criminality”. The title of Lee’s book, taken from the 21st chapter of Isaiah, in a way, addresses this concern. “Go, set a watchman, let him declare what he seeth” goes the Biblical phrase. Scout’s Uncle elucidates the point, “every man’s island”, “every man’s watchman” is his conscience. At a time of crisis, an individual’s sense of right and wrong is a stronger safeguard against the miscarriage of justice than a collective sense of morality. That is Harper Lee’s parting lesson, written half a century back but still as relevant as ever.