Temples Belong To The Hindus 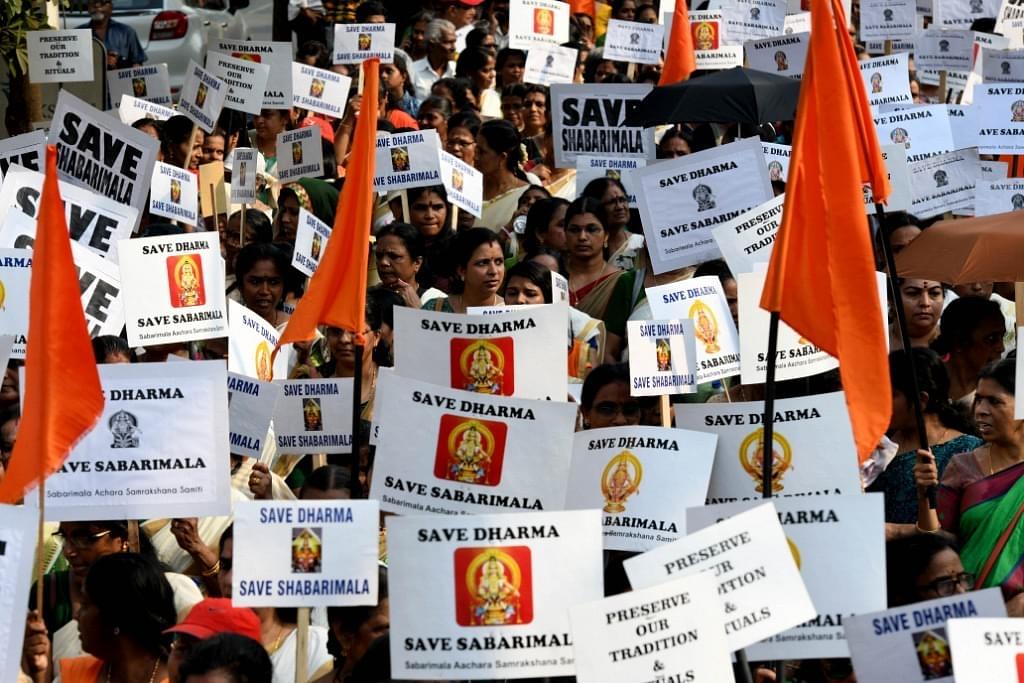 A great churning has taken place in Indian politics since the 2014 general elections. Ideas and policies earlier considered irreverent or impractical have become the topics of public debate and discussion. Of these, one of the most challenging proposals that has found its way into the public discourse is the proposal to vest control of Indian temples with the devotees rather than the state. However, such a ‘divestment’ requires more than a series of articles or social media campaigns. It requires a deep, pervasive study of the issue at hand, and a roadmap for reforming temple administration. The very conception that the state controls religious institutions and, therefore, the practice of religion in a liberal constitutional democracy, is repugnant in character.

One would assume that a self-proclaimed ‘secular’ state would be in a hurry to dismantle such an administrative mechanism. This has not been the case, however. Controlling temples has proven to be a lucrative business for the state. High-level positions have been farmed out to politicians as favours by whichever party is in power, and the administrative bureaucracy stands to benefit from their control of temple finances. Lately, the results of such a control of temples and temple administration have been more and more apparent across India, particularly in Kerala.

The Kerala legislature had passed an amendment to the Travancore Cochin Hindu Religious Institution Act, 1950 on 20 June 2018. The legislation was meant to replace an earlier ordinance that made some harmless changes to the administration of the Devaswom Board. While the bill that was introduced in the assembly was a verbatim copy of the ordinance, when the bill was passed, two new sections were added that radically changed its effect. The amended sections took away the requirement that the devaswom commissioners profess Hinduism. This inevitably led to a controversy in the state, and the Bharatiya Janata Party state president, P S Sreedheran Pillai, approached the Kerala High Court to challenge its validity.

The controversies around temples administrative bodies are not, however, limited to Kerala. It seems to be a consistent thread that winds through many a state. In Andhra Pradesh, a controversy has been brewing since January 2018 about the employment of non-Hindus in the Tirumala Tirupati Devasthanams (TTD). When the TTD attempted to terminate their services, the employees approached the Andhra Pradesh High Court that promptly issued a stay. This is not the only issue plaguing the TTD, however. The body has long been under the shadow of corruption, which escalated further when head priest Ramana Dikshithulu alleged widespread irregularities in the administration of the TTD, earlier this year. He was subsequently sacked.

In Odisha, the keys of the Puri Jagannath Temple treasury went missing only to be later recovered all in the span of a few days in June 2018. That is not all that ails the famous temple – there was violence when a new queue system was implemented, with the temple administration office being ransacked. Meanwhile, in Tamil Nadu the problems with the Hindu Religious and Charitable Endowment Department are so extensive that the Madras High Court threatened “to shut it down”.

The administration and management of temples had been normally the responsibility of the monarchs, who had been closely connected to the rituals and traditions of temples in their realm. As Hindu rulers, their control of religious institutions was viewed as legitimate and even necessary. Many monarchs fashioned themselves as the servants of the primary deity of their kingdom. The Maharaja of Travancore called himself the ’Sri Padmanabha dasa‘ the servant of Padmanabha Swami, while the Maharaja of Mewar was officially the Diwan of Mewar, the ruler being Shri Eklingji ji. T

he authority of the monarchs was not merely limited to the material aspects of their realms, but extended to temporal matters. There was no distinction between their ‘secular’ and ‘religious’ authority. They were considered coextensive with each other. As the British took over the subcontinent, the worldly authority of monarchs was taken away, but their spiritual authority remained. The British issued their first legislation to regulate temples in 1817 through the Madras Endowments and Escheats Regulation No VII of 1817. This was subsequently replaced by a legislation in 1863 and then again in 1926.

When India became independent, there was a huge question regarding the continued administration of temples by the erstwhile monarchs. These questions were resolved by the enactment of a series of legislations by various state governments in the 1950s. There, however, remain conceptual problems with the state control of temples. For one, how can a self professed “secular” state regulate the administration of Hindu temples? Secondly, can the state utilise the immense wealth of Hindu temples for its own purposes? One of the primary justifications for the enactment of such a legislation was that the devaswom board will only control the “secular” aspects of the temple, but the “religious” aspects will remain undisturbed. These functions are, however, practically inseparable.

These questions and more have found renewed relevance in the context of questions regarding Sabarimala Ayyapan Temple and the judgement of the Supreme Court. The Travancore Devaswom Board (TDB) highlights Sabarimala as the crown jewel of the temples under its control, and for good reason – almost a sixth of the TDB’s revenue is made from just the Makaravilukku season of the temple. More than once, there have been allegations of corruption in making the famous aravana payasam of the temple. What again brought to the forefront the legitimacy of state control of temples was the refusal of the TDB to file a review petition on the apex court judgement allowing the entry of women of certain age group, a decision clearly motivated by the political concerns of the state government than the devotees, whose concerns the devaswom board is arguably supposed to represent. Obviously, the judgement delves into the larger concerns of religious liberty, but that would be better discussed separately.

The graver problem with the state control of the devaswom is the control the political executive and legislature can exercise over it. The appointment of the devaswom board president and members are political decisions meant to reward allies, and not meant for the effective governance of the boards themselves. The acts governing the constitution of the HRCE bodies have themselves been amended multiple times to dilute the safeguards meant to ensure that devotees were in control of temples. The recent amendment to the Travancore Cochin Hindu Religious Institution Act is only the latest in a series of attempts to ‘secularise’ temple management.

The crux of the most contentious of issues is the definition of the word ‘Hindu’. This was a cause of a hilarious back and forth between the Left and Congress fronts in Kerala in the 1990s. The E K Nayanar communist ministry added a clause to the TDB Act that specifically defined ‘Hindu’ as someone who ‘professes Hindu religion’ but ‘need not believe in God or temple worship’ in 1990. When the Congress-led K Karunakaran government came to power, they amended the act in 1994 and specifically mandated that ‘Hindu’ includes only those who believe in temple worship and god. The issue was finally settled in 1999 when the then Left government defined ‘Hindu’ as someone who only needs to ‘profess’ the Hindu religion.

The question of who is ‘Hindu’ for the purposes of this act was settled in the 2005 judgement of the Supreme Court of India in M P Gopalakrishnan Nair Vs State of Kerala. The Supreme Court held that the word ‘Hindu’ in the Guruvayoor Devaswom Board Act included those who did not believe in temple worship, even though the act specifically mentioned that the person must believe in temple worship. Therefore, an atheist was also a Hindu for the purposes of the act.

This results in the most intriguing phenomenon in Kerala: self-professed atheists selecting other atheists to run the administrative body that regulates temples. Is such a situation desirable for the millions of devotees in the state? Are they desirable for the temples themselves?

Now, through the passage of the latest amendment, the Kerala state government can by law, nominate a non-Hindu to manage temples under the control of the TDB. This is a steady dilution of the initial legal requirements that existed for administrators of Hindu temples. These provisions can be in the future, amended again to remove any other legal limitations on the devaswom board administration. The administration of temples is subservient to the demands of the political executive, whose desires can be hostile.

The problem with state control of temples has entered the public debate with the controversy surrounding the entry of women of menstruating age into the Sabarimala Temple. Prayar Gopalakrishnan, the former president of the TDB, called for the constitution of a body that represents the interests of devotees to manage the temple. A common theme that seems to be running through all the states where the government is managing temples seems to be the lack of transparency and accountability as well as persistent corruption.

The state of disrepair and neglect that many temples have faced, and continue to encounter has only accentuated in the last few years. This is despite the immense wealth the devaswom boards are sitting on. A bureaucracy has developed in these states whose sole purpose it seems is leech of the temples; for private gain than for the good of the temple and its devotees. They have converted temples into money-minting machines rather than centres of pilgrimage, devotion, cultural perseverance and heritage. The problems with the state control of temples are aplenty, solutions at the moment are few.

Many of those who are associated with the ‘Right wing’ intelligentsia have long understood the problem with state control of temples, especially when the regime in power seeks to trivialise or undermine the faith and heritage associated with temples. There, however, remains to be a proper study and research detailing the issues that confront Hindu religious institutions, and how exactly they can be returned to the control of devotees. Such a proposal may not have the political mileage that many seem to think it will have.

There needs to be an ideologically committed Union government that seeks to deregulate temples, and the proposal must invoke confidence in all sections and classes of Hindu society. A comprehensive study that looks not only at the problems of state control, but also one that suggests solutions to it is the first step to “Swarajya” for temples.