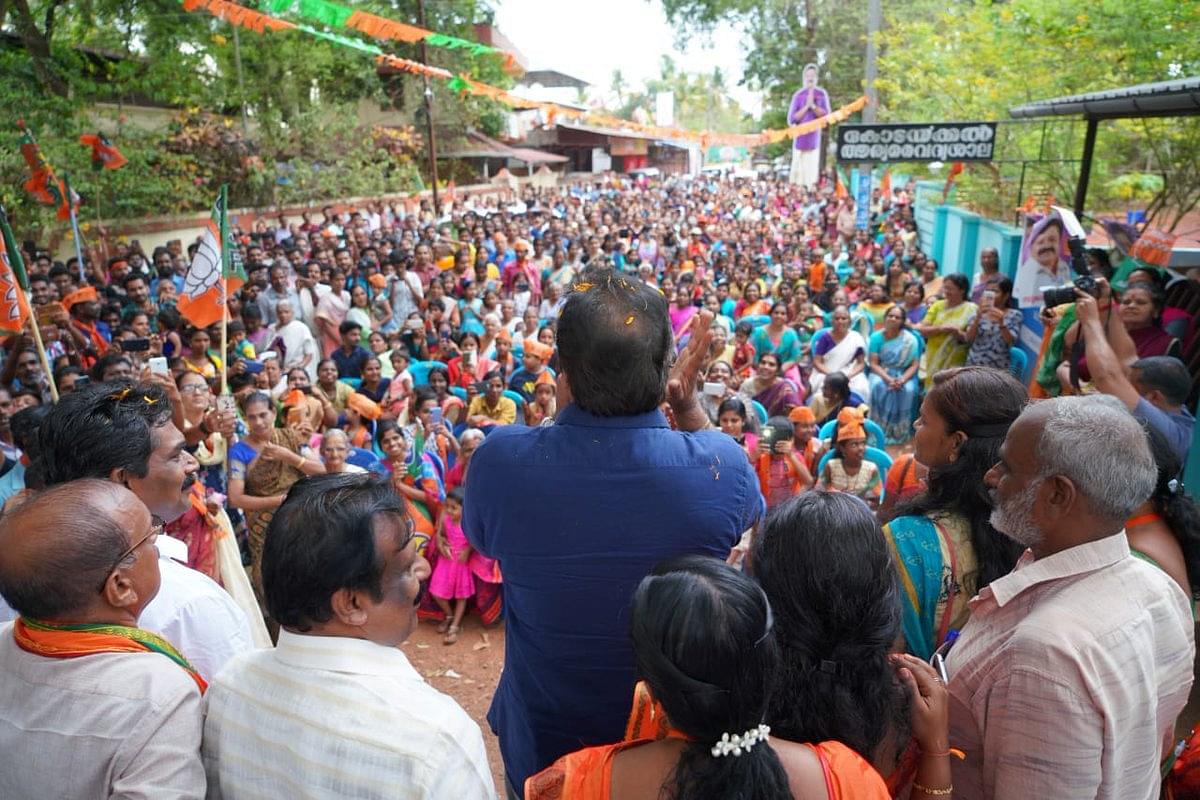 A Bharatiya Janata Party rally in Kerala ahead of the 2019 General Election. (Twitter)

On 6 April, Karti Chidambaram, the Congress candidate from the Sivaganga Lok Sabha constituency in Tamil Nadu, faced a group of women protesters. The women complained that they were not paid as promised for welcoming him with ‘aarti’ in Manamadurai assembly segment that forms part of the Lok Sabha constituency.

The local Congress leader had promised Rs 500 each to every woman who would perform the aarti but in the end paid a total of Rs 800 to be shared by the dozen-odd women.

If you had expected Karti Chidambaram to keep the promise, you were mistaken. Instead, he told the women not to worry about the small change, since they would all start getting Rs 6,000 every month if the Congress comes to power at the Centre.

The incident provided trolls on Twitter a gala time with most of them trying to run down Karti Chidambaram. One even said: “You can’t even pay Rs 500 as promised and talk of Rs 6,000 a month!”

Two constituencies away, in Thoothukudi, the team Dravida Munnetra Kazhagam (DMK) candidate Kanimozhi handed out Rs 2,000 to every woman taking the aarti.  Similarly, her opponent Tamilisai Soundararajan of the Bharatiya Janata Party (BJP), too, hands out money, though not as much as her DMK rival.

Election means a time for monetary gains. Women in rural constituencies of Tamil Nadu make it a point to perform aarti and earn as much as they can. In the early 1990s, women would get anything between Rs 50 and Rs 100. Times have changed and now nothing less than Rs 500 will do.

Within minutes of M K Stalin ending his roadside address there, the crowd vanishes in no time and the stage is being dismantled.

The opportunity for some people to make money thus, makes the introduction of a candidate in a village or a town in Tamil Nadu interesting. Vehicles honking amidst music and blaring of loudspeakers is a sight to behold.

It’s all a splash of colours of party flags, the candidate, people swarming to see their nominees, garlands and flowers. But all these are confined to just the introduction and a couple of days.

In neighbouring Kerala, too, similar scenes are seen but then, no aarti is performed. In the Lok Sabha constituency of Pathanamthitta, the home of Sabarimala Ayyappa temple, the BJP candidate K Surendran is given a traditional welcome with old women hugging him with affection.

Ditto in Thrissur, where a young child reaches out stretching its hands to actor Suresh Gopi, the BJP candidate there. Again, it’s all colours and sound of the loudspeakers that dominate the place.

Tamil Nadu and Kerala are witnessing contrasting campaigns, with a lot of enthusiasm, colours, sounds and emotions in the God’s Own Country.

In Tamil Nadu, signs of elections are muted with only a candidate’s arrival or a party leader’s presence making a place active. As soon as they leave the place, it becomes inactive again.

Near Thiru Vi Ka Nagar bus stand in North Chennai Lok Sabha constituency, a part of the road is blocked and a music troupe belts out songs in praise of the DMK and its president Stalin from a stage.

DMK supporters and cadres can be seen walking towards the stage or waiting for their leader to arrive to campaign for the party’s candidate Kalanidhi Veeramani. With summer heat sapping up their energy, the cadre and party workers are only restless than being eager to see their leader. But within minutes of his departure, all became quiet.

“It’s all now a fight on the social media. Parties have begun using WhatsApp and other such apps to reach out to the voters,” says Ramesh Shivaa, a BJP digital campaign manager in the Ramanathapuram Lok Sabha constituency.

A tour of constituencies like South Chennai, North Chennai, Central Chennai, Sivaganga, Ramanathapuram and Thoothukudi shows that campaigning activities have become low key unlike in the past where door-to-door campaigning was considered the safest bet.

There are little signs of elections being round the corner in most of these constituencies. Missing in Tamil Nadu are posters, banners and cutouts that used to be the norm in elections before.

“There are many problems in going for live campaigning. Cutouts are not allowed after a Madras High Court ruling. Anything we write on walls is valid only for three days, after which we need to get fresh permission. Posters, too, are being avoided,” says M Muthupandi, an All-India Anna Dravida Munnetra Kazhagam councillor in Sivaganga town.

As a result, most of the walls in southern part of Tamil Nadu are free from being taken over by any political party. Even posters are not to be seen at least in the urban areas of these predominantly rural constituencies. All these seem to be confined nearer to party offices in the constituencies or local towns.

“There is not much interest in the campaigning. There aren’t enough people too for this,” says a local leader of a national party in Sivaganga.

The problem in Tamil Nadu is that only the AIADMK and DMK have had an organised cadre for campaigning. But that is fast changing.

“These days, it is difficult to find AIADMK cadre. Either they have become old or after the death of J Jayalalithaa, former chief minister, they have lost interest,” says a state BJP leader, adding that even in places like Tirunelveli, where AIADMK put up its nominee Manoj Pandian, there were more BJP youth working for the National Democratic Alliance (NDA).

Things are almost the same with the DMK-led United Progressive Alliance (UPA) too, though hopes of their party storming back to power in Tamil Nadu in 2021 are keeping some of its cadre’s enthusiasm intact.

Political parties concur with the view that these days they are able to find more work for them on social media than on the field. “It is now easier to get people to do memes and post on social media than someone to go and campaign house-to-house,” says the local leader of the national party.

Parties say that they have to spend a lot to get people to attend the meetings of their important leaders. “To get people for meetings, each party has to spend on transport, at least Rs 250 per head and a packet of biryani. In the case of some men, we may have to even provide liquor,” says a regional party’s local leader in Ramanathapuram.

“In Tamil Nadu, nothing comes out of campaigning. Thanks to the Thirumangalam formula (bribing voters to vote for a particular party), no one will vote if you don’t give them money,” says the state BJP leader.

Various sources across parties say that the voters themselves began to pester local leaders this time on what they would get as payment to cast their votes. “In Tamil Nadu, no ordinary person can now dream to become a parliamentarian or a legislator given the extraordinary amount of money that will have to be spent,” says the BJP leader.

The scenario in neighbouring Kerala is a study in contrasts. Posters, cutouts, banners and buntings are all splashed across constituencies like Thiruvananthapuram, Attingal and Pathanamthitta.

In Pathanamthitta, there are walls that display posters of the three main candidates, the third being Congress nominee and sitting Member of Parliament, Anto Antony.

In these constituencies, jeeps and vehicles criss-cross campaigning for candidates of various parties. The party offices are bustling with activities as each party is hopeful.

A major difference between Kerala and Tamil Nadu is the way the campaigns are held. In Kerala, the emphasis is more on door-to-door as the older generation doesn’t seem to have caught up with the social media. Or it could be that they don’t give much importance to the social media or even that traditions and customs are still alive in the state.

For example, the scenarios of K Surendran, BJP candidate in Pathanamthitta, and Suresh Gopi, BJP’s Thrissur candidate, are the ones that will inject life into any party cadre.

Even as they arrive, the BJP candidates can be seen mobbed by the crowd. For the BJP what makes a huge difference is the turnout of women, both young and old, at these candidates’ meeting.

The response from women is something that is giving the BJP the hope of opening its account in Parliament from Kerala. No doubt, the Supreme Court ruling to allow women of reproductive age into the Sabarimala Ayyappa temple has become a live issue in these elections and the BJP is utilising it to the hilt.

In addition, what has drawn women towards the BJP is that the party had backed the women’s protest against the Supreme Court ruling and the CPI-M-led state government using force to implement the rule. Surendran’s imprisonment for 20 days in taking up the cause has also helped the party.

Probably, change is in the air as far as Kerala with the CPI-M under pressure after coming to power in 2016. In Tamil Nadu, the outcome seems to have been decided on which party has paid how much to the voter. That sums up why there is such a difference in the political campaign in these states.