The Incredible Story Of Begum Samru 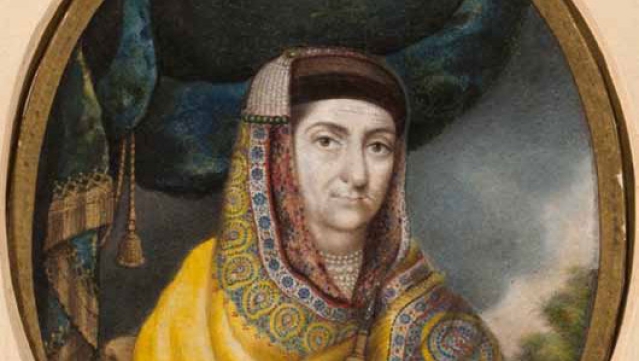 Beginning a series on the lives and achievements of some extraordinary women from Indian history.

A four-and-a-half-foot-tall girl picked up from the streets of Delhi by a kotha owner went on to rule a prosperous kingdom for 55 years, in a time where empires were tumbling and no man was safe. With her diplomatic abilities and her commanding presence, Begum Joanna Nobilis “Samru” is an unlikely feminist icon from the 18th century.

It was the gardi ka waqt, the worst of times.  After Nadir Shah’s invasion of India in 1739, the Mughal empire started crumbling. By the end of the 18th century, it was said about the Mughal ruler Shah Alam II—Badshahat e Shah Alam, Az Dilli te Palam; his writ ran but only up to the Delhi suburb of Palam. He barely had  5,000 troops. Matsyanyaya or the law of the jungle prevailed; with no strong central power, all were scrambling for a piece of the pie.

Mughal governors declared themselves rulers of their own provinces; native tribes like the Marathas and Sikhs, long suppressed, tried to create their own empires; and the British, French and other European powers morphed from traders to rulers, inspired by the singular success of Robert Clive in Bengal. Indeed, anybody with a brave heart and a few soldiers dreamt of carving out his own kingdom. This was also the heyday for European mercenaries, trained in European technology and organization, and offered their services to the highest bidder. Many were French, like the legendary Benoit de Boigne.

Into this thick soup of intrigue came Walter Reinhardt Sombre in 1750, an Austrian mercenary who had been part of the French army in India. In 1760, he offered his services to Mir Qasim of Bengal. Mir Qasim, chafing under British dominance, reoccupied Patna, where Sombre’s troops carried out the massacre of about 150 Englishmen. Now called the Butcher of Patna, Reinhardt fled British retribution to Oudh, and continued his career as a mercenary.

In 1765, at the age of 45, he dropped into Khanum Jan’s kotha in Delhi’s Chawri Bazaar for an evening of entertainment and encountered the charming 15-year-old Kashmiri dancer Farzana, who he soon moved to his zenana. Many Europeans maintained large harems, and Reinhardt already had children from a previous concubine, Barri Bibi.

The quick-witted and astute Farzana became his companion and comrade in arms, as he offered his services to various nobles. Sombre soon started working for the Jat rulers of Deeg, who were then occupying Agra. In 1773, the Mughal forces under Najaf Khan expelled the Jats from Agra. But Khan was so impressed by the fighting prowess of Sombre’s troops that he invited him to join the Mughals. In these fickle times. Sombre had already had 14 masters.

Sombre joined the Mughals with his troops. In the next three years of living in Delhi, Sombre and his begum entrenched themselves in the Mughal court: many observers attribute a major role in this to the begum’s ability to make friends and influence people!

Not only did they nimbly avoid being handed over to the wrathful British, they actually managed to get the rich jagir of Sardhana, yielding Rs 6 lakh per annum ( about Rs 30 crore today) granted to them in 1776, with a royal sanad from Shah Alam. Thus did these penniless adventurers become rulers. Sombre was also made the civil and military governor of Agra.

However, Sombre did not live long to enjoy his good fortune, and died just two years later in 1778. As per norm, his son Zafaryab Khan, though considered feeble-minded, should have inherited the jagir. But Begum Samru (from Sombre) was not about to give up her powers without a fight: she managed to get her troops to support her, and use her influence with Najaf Khan to get Sardhana allotted to her. Zafaryab continued to live in luxury in Delhi, following a life of poetry and the arts funded by her.

So the Begum began her career as the supreme commander of about 4,000 troops with about a 100-odd Europeans, and held court in Sardhana, wearing a turban and smoking a hookah. She inexplicably converted to Catholicism in 1781 and took the name of Joanna, though she maintained Mughal dress and etiquette, except sometimes when she shed purdah and dined with her European officers.

She would lead her troops into battle, and won many. Given her successes, some inevitably came to believe that she was a witch. She came to the hapless Shah Alam’s rescue many a time, and he started calling her his “beloved daughter” and gave her the title Zebunnisa (ornament among women).

One instance was in 1783, when Baghel Singh occupied Delhi, and camped with 30,000 Sikh soldiers in the area which was thus named Tis Hazari. A petrified Shah Alam asked the Begum to negotiate: she managed to get rid of them for the right to build eight gurdwaras in Delhi, and a percentage of the octroi for that year.

In 1788, the Rohilla chieftain Ghulam Qadir occupied Delhi, and tortured the royal family to get them to reveal the whereabouts of their treasures. In a fit of rage, he blinded the emperor. The Begum arrived, and faced with her artillery and troops, Qadir fled Delhi. He was later captured by Mahadji Scindia at the behest of the emperor, and creatively tortured to death, after his eyeballs had been sent to an eagerly waiting Shah Alam in a box to feel with his fingers. The Begum was known for her judgment and forethought, but in one instance she let her heart rule her head, and paid a high price.

George Thomas, an Irish dockworker turned Indian mercenary joined her in 1787. A bold fighter, he was the head of her troops and by many accounts her lover. He was known as Jahazi Sahib, the desi version of “George”. Their partnership flourished and they won many a battle, but things changed, as they always do. A dashing and sophisticated French adventurer, Armand Levassoult, joined them, and the Begum fell madly in love at the age of 40. She secretly married the Frenchman; a furiously jealous George Thomas left and joined a Maratha adventurer with his small troop. Levassoult was very high-handed and wanted to maintain a court in the high roi soleil style. He managed to alienate everybody, and her previously loyal troops, under a discontented Belgian, now called on her stepson Zafaryab Khan, the culture vulture, to lead a revolt against her.

In true romantic style, the lovers fled, chased by the soldiers. They had a suicide pact, and just when they were about to be captured, the Begum in her palanquin stabbed herself. Seeing her blood-soaked clothes, a la Romeo and Juliet, Levassoult shot himself, though he could have escaped on his horse. The Begum however had not died, and her soldiers dragged her and tied her to a cannon for days. When George Thomas heard about it, the beau chevalier came to her rescue post haste and restored her power.

She placed her stepson under house arrest in Delhi, where he continued with his poetic endeavours till his death 10 years later in 1803. She married George Thomas off to a lady in waiting. He left and for a short period managed to become the Raja of Hansi, a rare white “Raja of Tipperary” in India. He built the Jahaz Mahal in Hissar which is still there. The Begum looked after his wife and children after he died.

The British meanwhile were becoming more powerful under their new viceroy Lord Wellesley, and his brother Arthur, who would go on to become the celebrated Duke of Wellington. The duo had defeated Tipu Sultan of Mysore in 1799, and were now taking on the Marathas. In the Battle of Assaye in 1803, the Begum, as part of her Mughal allegiance, had to send five battalions on the Maratha side. In this hard-fought battle, which Wellington rated his finest victory (more than Waterloo over Napoleon), the Begum’s troops, under her covert instructions, managed to preserve themselves, and return to her safe and sound. Meanwhile, the Marathas had lost the battle of Delhi to the British under Lord Lake, and British troops entered Delhi.

The British obviously wanted to take away her jagir, given her husband‘s massacre in Patna, and her fighting against them at Assaye, but the Begum had survived many sticky situations and manoeuvred hard. She helped negotiate the release of a British official held hostage by the Sikhs, and charmed Lord Lake. When he greeted her with a kiss in front of her horrified troops, she told them that this was the way a Padre greeted his daughter (she was about 50, and he was just about five years older).

The negotiations went on for a couple of years, and the British finally became convinced that she would be a useful and faithful ally. The new viceroy Lord Cornwallis confirmed her in her jagir. Half her troops were lent out to the British at her expense, and her mercenary days now came to an end.

She spent the next 30 years tending Sardhana and its people. A contemporary historian says that “An unremitting attention to the cultivation of the lands, a mild and upright administration, and for the welfare of the inhabitants, has enabled this small tract to yield a revenue of 10 lakh of rupees per annum (up from six…)”.

She had an Italian-style basilica based on St Peter’s in Rome and also a palace built in Sardhana. The architect of the church was Antonio Reghellini, an Italian from the city of Vicenza. The highlight is an 18-foot sculptural monument showing the Begum holding her sanad surrounded by European and Indian courtiers. The basilica is still a site for pilgrimage by thousands.

She also patronized artists and poets, and was fond of gifting lifelike portraits of herself to people. Her minister, Diwan Rae Singh, was an ancestor of Jawaharlal Nehru. She had been gifted a beautiful residence in Chandni Chowk just opposite the fort by the Mughal emperor, which is now Bhagirath Palace, one of the largest wholesale markets for electrical and electronics goods in the country!

Remarkably, the story of her inheritance still goes on nearly two centuries later.

She had adopted and brought up her step-son Zafaryab’s grandson David Ochterlony Dyce Sombre as her heir. On her death in 1836, the British would not accept him as ruler because of their doctrine of lapse. He did however inherit her personal wealth, and went off to England to fight cases against the government. There he became the first Asian Member of the British Parliament (from Sudbury) and married a British aristocrat. When he objected to her adulteries, she managed to get him declared a lunatic, and all his inheritance passed to her.

She however died childless, and the estate reverted to the British government, which undertook to turn it over to its proper heirs.

So the battle goes on for the last 150 years—many putative heirs have been trying to get the British government to hand over this money; and descendants and relatives of Reinhardt from all over the world have banded together, trying to prove their claim to this fortune, now worth perhaps a billion dollars!