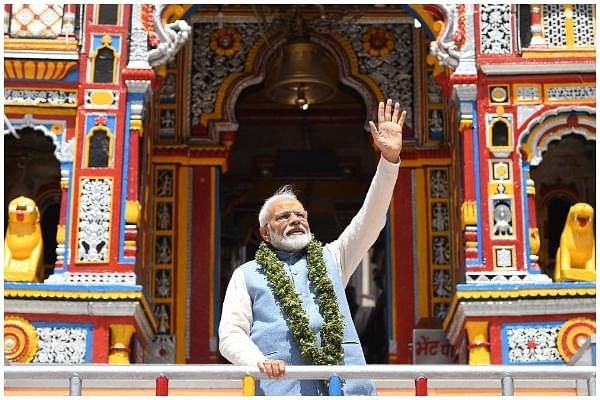 The ‘secular’ consensus is truly over — the consensus that normalised the tradition of political class celebrating Iftar parties with gusto while shunning Hindu symbolism like the plague. While this disgusting display of double standards was going on for quite some time, Sonia Gandhi-led Congress ecosystem took it to the extreme and crossed the red line by raising the fake bogey of Hindu terror.

Severing modern India from its civilisational roots has been a wet dream of Nehruvian establishment (not to be conflated with Jawaharlal Nehru’s personal views).

Through dogged decade-long pursuit of minoritarianism with missionary zeal, it came painfully close in succeeding in its cultural putsch of defenestrating Hinduism from the lifeblood of this nation.

But in the last five years, the situation has overturned, and how. ‘Hinduisation’ of politics has warmed the cockles of the silent majority’s heart. Many on the right credit Prime Minister Narendra Modi for this stupendous achievement, but I believe he is more of a harvester of the backlash against the secular consensus rather than harbinger of this change. Nonetheless, he played his part to the fullest without which this project wouldn’t have succeeded.

However, the job is only half-done. There is no time for complacency. The goal of Hindu nationalists in this five-year plan should be to work towards Hinduisation of Indian polity. To be clear, I am not laying the burden of this humongous task on the shoulders of the Bharatiya Janata Party (BJP) government. Nor is it practical to do so. Fundamental changes to the Indian Constitution require prachand bahumat of the BJP in Rajya Sabha too, which can take many years. By November 2020, National Democratic Alliance (NDA) will have the majority in the upper house, not the BJP, and one needn’t underscore these two are very different things.

So, it’s the Hindu nationalists outside the government who will have to do the heavy lifting and come up with innovative solutions working within the four corners of the Constitution, at least for the time being. They will need to work among the masses to broaden the horizon of Hindutva which, for far too long, has been limited to the trio of building Ram temple in Ayodhya, abrogation of Article 370 and implementation of a uniform civil code. Citizenship Amendment Bill is a welcome addition to this list in the last five years but its scope must be expanded. As Supreme Court advocate J Sai Deepak suggests, India should “legislate the fact that India is the natural homeland for Indic communities and therefore they have a right of asylum and citizenship in India whenever they are persecuted anywhere in the globe.”

Islam and Christianity — two international majority religions pose the biggest threat of changing the nature of Indian society. The former’s rapidly increasing demographic footprint and the latter’s institutional and money power are a cause for concern.

It is important to raise awareness and come up with effective solutions to forced or induced conversions, demographic invasion of border areas, illegal immigration, changing demography in Kashmir, etc. Removing Article 370 or 35A is not going to solve the problem. It’s only the first step. One hears clarion calls for population control bill, but we need to ask if the Indian state, which can’t even arrest a few villagers for power theft has the capacity to implement such a krantikari act? We should analyse if we can achieve much better results by going on an overdrive in educating Muslim girls. Hence the call for effective solutions grounded in reality, which lie within the four corners of the Constitution.

Asymmetric laws, which gives special rights to these global majorities under the ‘minority rights’ tag need to be neutralised until constitutional amendments to ensure equal rights are put in place. This can be done by reforming the most onerous law — the Right to Education Act and modelling it on Ayushman Bharat which allows the institutions freedom to join the scheme if they like the government’s terms of contract.

On the education front, it is of utmost importance that children in all parts of the country are taught in Indian languages. There is nothing secular about languages as is commonly believed. They are intimately connected to the faith, traditions and culture of the people who have developed them. If we want to preserve and pass on these to future generations, teaching in Indic languages is a must. Massive investment and effort are needed in this direction.

In the 1950s, Buddhists, Jains and Sikhs were legally Hindus. Now, they are minorities (non-Hindus). Reversing this doesn’t need any constitutional amendment. The low hanging fruits such as replacing exclusive scholarships for minorities with secular national scholarships and merging Minority Affairs Ministry with Social Justice Ministry should be picked at the earliest.

Similarly, if there is strong will, the government can bring a simple law to put a complete stop to flow of foreign funds to ‘service’-NGO network which works overtime to harvest souls and foment tensions in India. Giving constitutional protections to India’s unique traditions like Sabarimala, Jallikattu, Dahi Handi, etc, should be the easiest to do in the convenient climate of Hinduised politics.

As one can see, I have put the burden for finding solutions to heavy-duty problems on common Hindu nationalists. What is required of the Modi government in the short term demands little expending of political capital. It can devote 90 per cent of its time on vikas, which has reaped rich electoral dividends, though that’s not the only reason to focus on development. Walter Andersen, author of 'The RSS: A View To The Inside', writes that in an interview with him, Prime Minister Modi “went so far as to imply that economic development was now central element of Hindutva" (emphasis mine). Andersen doesn’t elaborate, but it’s not hard to understand why Modi thinks so.

As I wrote earlier, hungry stomachs don’t a renaissance make. I would like to add only two items to the vikas agenda which can make the most difference in lives of the poor: focus on quality education for the masses and judicial reforms to ensure timely justice.