The Saint And The Slut: Why Men Suffer From The Madonna Complex 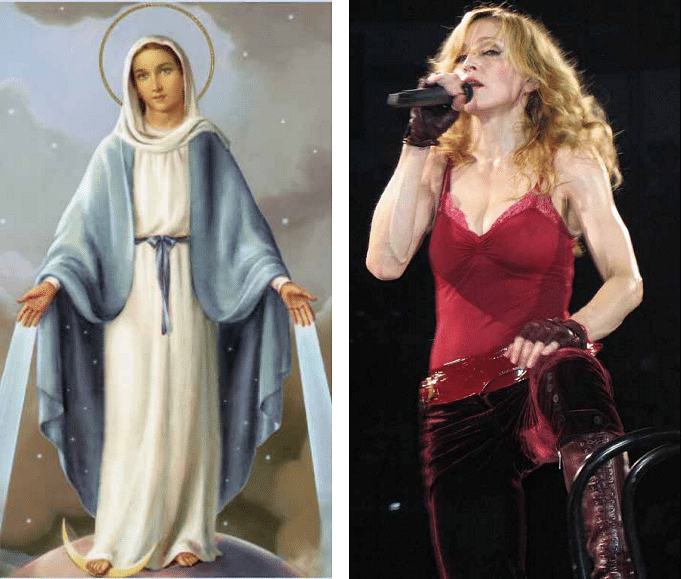 “Men divide women into two groups,” remarked my “wise” cousin as he went on his merry way – ”the ones you wed and the ones you bed”. Truth be told, even as the 13-year-old me listened in rapt attention to the ranting of the man who was almost a decade wiser, I was both amazed at his regressive views (about women and their sexuality) and his progressive ways (for he was actually lecturing his little cousin about the birds and the bees).

Note: Of course, since I studied in a convent school, I already knew enough about the birds, the bees, the bears, the boars, the beasts and the bad girls.

Although I already possessed enough knowledge on the so-called duality of women as they were viewed by the opposite gender, I knew it would do me well to hold my tongue (a trait I practice less frequently now). After all, it was the perfect opportunity for me to sneak a peek into the strangely regressive world of an otherwise progressive man. That’s right, my cousin is a well-educated, well-travelled, well-positioned man, who I assure you is pretty well-bred, well-fed, well-wed, and well-bed! Then again, let’s park our thoughts on the “bed” part for now.

Thus, what my cousin told me – oh so happily! – is not new knowledge at all. Sigmund Freud, aka the father of psychoanalysis, in fact, coined a term – almost a century ago – to refer to this psycho-social conditioning of men, popularly dubbed the Madonna-whore complex, which in fact could be seen as a natural fallout of the Oedipus complex and basically referred to the psychological condition whereby men saw women as either saints or sluts. In other words, as motherly Madonnas or wanton whores.

Thus, Freud propounded: “Where such men love, they have no desire, and where they desire they cannot love.” Ergo, the ramifications of the Madonna-whore complex basically dictates how a man views women and his subsequent relationships with them…before, during and after marriage. Thus, such men draw a distinction between love and desire, reserving the former for their wives (i.e., the mother of their children) and the latter for the whores (women they devalue, defile, debase…and yet…desire).

Thus, while the unwedded man beds either a series of girlfriends and/or prostitutes (bad women he chooses to have great sex with), he then chooses to marry a virginal bride – or at least, he believes he has chosen a virginal bride…for more information, refer to “Warranty Void If Seal Broken” (Swarajya, February 2015). Once married to his “virginal” bride, he however becomes increasingly unsatiated…coveting the company of sexually liberated bad girls. In fact, the strangest paradox that actually comes into play is when such a man – if ever – does decide to end his marriage to his Madonna. In such a case, even if he decides to marry a second time round, he would still hold out for yet another Madonna.

Alas! Some men never learn…for they cannot even begin to fathom that it is indeed possible to find a woman who would be singular despite this duality…someone who could be “a lady in the street and a harlot in the sheet”!

Of course, the implications of the psychological complex are not just reserved for the male member of the species. Women too display a penchant for playing Madonnas, often choosing to ignore or kill the whores within, thus never reconciling their two halves. Then again, even women who have successfully resolved this duality continue to play the good girl, lest the man (who they either want to marry or are already married to) dethrones them as their lovable mate. The after-effect of this can be terrible, creating rifts in marriages that are already otherwise strained.

In fact, in a lot of ways, this complex has made intimacy a real challenge between married couples. For example, on the one hand, you have a husband whose desire for his wife dips or wanes either after marriage or soon after the birth of the first child (wherein the wife actually attains the “motherly” Madonna position); on the other hand, you have women who repress their sexuality because they are afraid of not being respected by their partners post-marriage (or even withholding sex as a passive-aggressive tool to control or punish their partners).

This, of course, becomes a dual-edged sword. For, even as the wife continues to repress her sexuality, she also invariably begins to feel undesirable – a state that can either send her into deep wells of depression or into the waiting arms of another man. Thus, the fallout of this is often severe: a lonely marriage that is devoid of both love and lust.

It is rather ironical that in a country that literally wrote the book on human sexuality, i.e., the Kama Sutra, sex continues to be viewed from the distorted prism purported by Abrahamic religions that basically equates Sex with Sin. Truth is, every human being is a sexual being, who needs to realise that social conditioning is flawed in its present form, and that sex can be, in fact, the purest expression of love.

This reminder becomes especially relevant since every message that we have been receiving – whether a man or a woman – contains the same flawed premise: “Sex is a tool for procreation, not recreation.” In fact, article after article, study after study – and brother after brother – has attempted to establish that when it comes to sex, men crave recreational sex, while women crave relational sex, which, interestingly, also forms the basis for the common joke that “marriage is the price a man pays for sex while sex is the price a woman pays for marriage”.

Truth is, sex is the most important aspect of the biological world (a tool for the propagation of all species), the reason why we are all here, living and breathing. It is as natural as the air we breathe, the water we drink and the love we crave. Maybe it’s time women stopped trying to play the good girl and realise that one’s sexuality is not to be feared but revered. To accept that sex is not a weapon of control but an earnest expression of love and desire, and maybe then, our marriages will be exactly the way they were meant to be – a joyous union of body and soul.