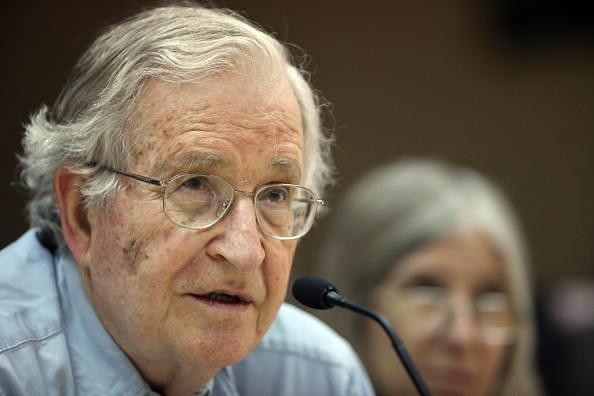 Avram Noam Chomsky, the 87-year-old American linguist, philosopher, cognitive scientist, historian, social critic, and pre-eminent intellectual and political activist has authored more than 100 books on topics such as linguistics, war, politics, and mass media. It is natural that any new book by him would be greeted with keen anticipation.

So is the case with his Who Rules the World? Its 23 chapters deal with a wide range of subjects spanning the 1962 Cuban missile crisis, torture camps in Guantanamo Bay, the Israel-Palestine conflict to the Global War on Terror (GWOT), Russia and Afghanistan. The centrepiece of Chomsky’s thesis encompasses the policies pursued by USA over the last two centuries but especially its foreign policy since the end of World War II. The UK and Israel who are close partners of USA also come in for considerable harsh criticism.

Those who are familiar with Chomsky’s work will not be surprised that Who Rules the World? is a no-holds barred, strident and unsparing criticism of US foreign policy whether it relates to Central America, Latin America and the Middle East or to Iran, Iraq and Syria. Chomsky cannot find a single positive aspect of foreign policy pursued by USA. The UK and Israel are also subjected to their fair share of trenchant whip-lashing but the pride of place is of course reserved for unbridled castigation of the United States.

The title of the book would appear to suggest that it will embrace a detailed account of the rapidly evolving global geopolitics with an inexorable move from a unipolar world after the end of the Cold War in 1991 to a multi- polar world in the aftermath of 9/11, to the international financial crisis in 2007-08 and the Eurozone sovereign debt upheaval in 2010. Those who pick up the book with such expectations are likely to be disappointed. Because the book not only does not have a focused treatment and analysis of the current international situation but is also not a smooth, seamless development of thoughts and ideas. In fact, it is a collection of some articles and essays penned by Chomsky over the last few years which have been strung together. A few chapters dealing with current international challenges and issues have been added at the end. Consequently there is no connection or correlation between one chapter and the next. Several of them deal with entirely different and varied themes or subjects. Because of this, there is some repetition in different chapters of the book. This could have been avoided through smart and creative editing. A number of chapters appear to have been written several years ago, some going as far back as more than four years. For instance, Chapter 8 dealing with the Cuban missile crisis of October 1962 begins thus: ‘’The world stood still some fifty years ago during the last week of October.’’ Again in Chapter 10, the author writes: ‘’We’ve recently passed the fiftieth anniversary of the Cuban Missile Crisis.’’ It would have been more useful for the discerning reader if it was indicated prominently on the face of the book that it is a compilation of essays, most of which have appeared elsewhere over the last several years.

Climate change and nuclear conflict are close to Chomsky’s heart and have been dealt with at considerable length in the book. He identifies these two as the main threats to the long-term security and survival of mankind.

Chomsky is not able to discern any merit or positive aspects in foreign policies pursued by the United States in particular and the Western countries in general. This would not come as a surprise to those who are familiar with Chomsky’s previous writings but his relentless attack on and bashing of the West do leave an impression of some prejudice and bias on his part. He expresses his virulent opposition to all trade agreements including NAFTA. Chomsky provides the reader with a wealth of references, instances and examples to substantiate his assertions but it does leave a feeling that there would definitely be another perspective to the account.

The book is full of instances of the double standards and hypocritical attitude of USA and other western nations, particularly Israel. This becomes starkly evident when the West deals with threats from its adversaries as compared to when it itself launches attacks against countries and forces hostile and inimical to it.

The relevance and utility of the book could have been enhanced substantially if instead of only criticising US policies, the author had also provided some suggestions or solutions to deal with challenges and problems being confronted by the world today. Also, in the case of past events, thoughts and recommendations about what alternative course could have been adopted is missing. It would have been beneficial and useful to the reader if a broader and more holistic perspective was provided.

China and the dispute over the South China Sea has been mentioned in brief in the last chapter which appears to be one of the few fresh chapters added to this compilation of earlier writings. The issue of China’s rise and the threat that its assertiveness and belligerence as well as its rapid political and military rise poses to the region and the world is touched upon very briefly and in insufficient detail. Problems and difficulties being experienced by China in view of its slowing economy, social tensions, minority unrest and so on are not mentioned. The only drawback referred to is the demographic decline which will impact the number of people who will be able to join the workforce to continue to fuel economic growth.

India gets very limited space in the book, only a few passing mentions. It would however appear that Chomsky’s understanding and appreciation of South Asia could do with some amount of intense study. For instance, while speaking about radicalisation in Pakistan he states: ‘’It is also no secret that the population has been embittered and radicalised by Washington’s drone campaigns.’’ Anyone familiar with South Asia would know that Islamisation and radicalisation of Pakistan started much earlier during the regime of Zia-ul-Haq in the late 1980s and not over the last few years when drone attacks became more common. While speaking about the attack by American Navy SEALs on Osama bin Laden, Chomsky says: “...recent case of executive assassination was that of Osama bin Laden (OBL), murdered after he was apprehended by seventy-nine Navy SEALs, defenceless and accompanied only by his wife. Whatever one thinks of him, he was a suspect and nothing more than that.’’ It needs to be realised that it would have been impossible for the American forces to take OBL with them. There was no other alternative available to them but to annihilate him.

Chomsky’s writing style is full of under-stated wit, humour and sarcasm. That makes his text immensely readable although he writes on serious themes.

This is a good starting point to learn about Chomsky’s perspectives and views on a range of international issues. Those who are already familiar with his outlook and thinking might not find anything new or fresh in his latest offering except that more recent examples have been cited to substantiate and embellish his assertions. It appears that the book has been published in a hurry to hit the market during the most intense phase of the US presidential election. In hindsight, it is a moot point whether it made any impact on the final result of the contest.