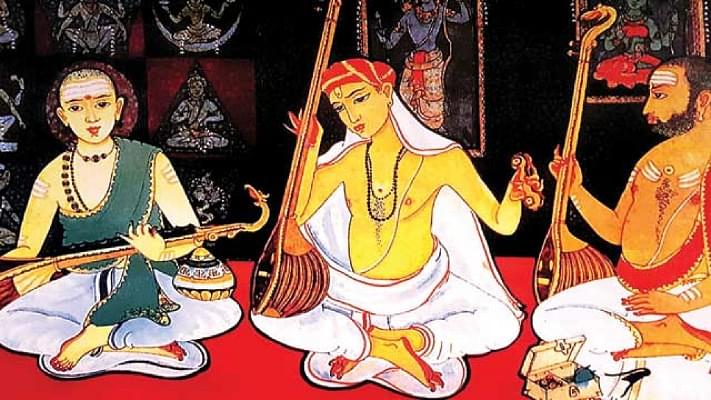 All of Carnatic music can be described in pre-Tyagaraja and post-Tyagaraja terms.

Every genre of music has individuals, influencers and demigods. Some of them change the course of history for that particular genre. In Western classical, you have Beethoven and Mozart. In jazz, you have the Harlem singers. In Hindustani music, you have Amir Khusrau and Mian Tansen in Akbar’s court. All of Carnatic music can be described in simple terms – pre-Tyagaraja and post-Tyagaraja.

Tyagaraja (1767-1847) is the most celebrated poet, composer and singer in Carnatic music. This year marks his 250th birthday.

Thanjavur, with the Cauvery river flowing, yielded three seasons of crops. The people were happy under various rulers, all of whom were great patrons of the arts – the Cholas, and later the Vijayanagara kings and the Maratha rulers. The temple town of Thiruvarur is known for the ancient temple dedicated to Shiva, worshipped as Tyagesa. It was here that Tyagaraja was born as the third child to the couple Kaakarla Ramabrahmam and Sitamma on 4 May 1767. They were Telugu Vaidika Mulakanadu Brahmins. They had two older sons, Panchanada Brahmam and Panchapakesa Brahmam. Tyagaraja was named Tyaga Brahmam at birth.

The family moved to Thiruvaiyaru, where King Tulaja II, who ruled between 1763 and 1787, gave the father a gift of land and a home. Thiruvaiyaru, where all the five tributaries of the Cauvery river flowed, became an ideal ground for Tyagaraja’s creativity to flourish. The culturally fertile ambience in which he grew up in Thanjavur added to Tyagaraja’s art, thought process and music. The biographic details of Tyagaraja tell us that he had two wives, Parvathi and Kamala. Parvathi died early, upon which he married her sister, Kamala. They had a daughter, Seetalakshmi, who had a son, Tyagaraju. The grandson died early and with that ended the direct bloodline of Tyagaraja.

It is important to understand the political milieu in which Tyagaraja lived. Thanjavur had already seen two major invasions by the time he was born – the English in 1749 and the French in 1758. Between 1773 and 1776, the Nawab of Arcot waged a war and ruled the place.

In 1780, Hyder Ali invaded Thanjavur and occupied the region for a couple of years. When he retreated, he did so by causing a lot of destruction, typical of a sadist tyrant. The rich granary of Thanjavur was depleted, and foodgrain production crashed, leading to a drought-like situation. Over 60,000 people fled the region and over 2,000 were killed in the battles.

Those remaining were left to struggle and fend for themselves. There was a famine. In the first 30 years of his life, Tyaragaja was a witness to a lot of these events and faced difficult times. What kept him afloat was his Rama bhakti. Nothing could replace the devotion he had to his Lord Rama. Eventually, many of these events made for direct and indirect references in some or the other way in his songs and writings.

It wasn’t like there were no other singer-composers before Tyagaraja. The Bhakti literature that originated in the Tamil-speaking regions of South India in the fifth century BCE found many poets who composed songs to their favourite gods. The famous Alvar poets wrote over 4,000 songs in praise of Vishnu, collected in “Naalayira Divya Prabandham”. The Nayanmar saints wrote songs in praise of Shiva. Several poets across the Dravidian landscape emerged by the fifteenth century. The Dasa Sampradaya of poets like Kanakadasa, Purandharadasa, Vijayadasa and so forth in Karnataka, Bhadrachala Ramadasu, Kshetrayya and Narayana Theertha in the Telugu-speaking regions of Andhra and many more. Tyagaraja was also aware of saints in the north, like Tulsidas, Namdev and Tukaram from Maharashtra. He took inspiration from the writings of these poets as well. In Thanjavur was also the little village of Merattur, where the theatrical form of Bhagavata Mela flourished. Tyagaraja took his musical inspirations and influences from all these he was surrounded by, while growing up.

From various biographies, we know that Tyagaraja learnt music from Vidwan Sonti Venkataramanayya, who was a musician in the court of King Tulaja. He began composing at the age of 15. Over 800 of his songs survive. He set them to tune in numerous ragas. He also wrote and composed two operas, “Nauka Charitramu” and “Prahlada Bhakti Vijayamu”. A large part of his works survived, thanks to the numerous branches of lineages his students come from. The Music Academy of Madras that enters its ninetieth year this year, has a rich archive of Carnatic music. In that, almost all of Tyagaraja’s songs can be heard, rendered by some of the greatest stalwarts of Carnatic music over the last century.

Photography was not invented during Tyagaraja’s time. However, what we have are several popular artistic impressions, a few of them drawn during his lifetime. The most popular one was created by musician and painter S Rajam. Dolls of Tyagaraja continue to adorn the toy exhibits in every south Indian home during the Dussehra festival. Unless it is a thematic affair, almost no Carnatic concert is complete without rendering at least one good composition of his. In fact, to assess the growth of a student learning Carnatic music, the compositions of Tyagaraja play a crucial role. Tyagaraja along with Muthuswamy Dikshitar (1775-1835) and Syama Sastry (1762-1827) are considered the holy trinity of Carnatic composers. All of Carnatic music is classified as pre-Trinity and post-Trinity. Every musician has an image of this trinity in their home which they worship with great reverence.

Through his writings, Tyagaraja adhered to the quintessential quality of devotion and selfless surrender to god. A few days before his demise, he was initiated into sanyasa ashrama and lived his last days as a saint.

Though his direct bloodline stopped, his shishya parampara or legacy of disciples was large. Some of the most prominent names are Manambuchawadi Venkatasubbayya (who was also his first student and a cousin in relation), students from the Walajapet tradition, Umayalapuram tradition, Lalgudi tradition, Thillaisthanam tradition and so forth. But after Tyagaraja’s passing away, his students split into several warring factions. It would be many years later that Bangalore Nagarathnamma, a celebrated singer, who hailed from the Devadasi community, would be able to unite them. She donated all her lifetime earnings to build a temple for him above his samadhi. To this day, her samadhi lies opposite to Tyagaraj’s, where one can find a life-size statue of her’s facing his with folded hands. One cannot say if Tyagaraja’s bhakti to Lord Rama is greater, or Nagarathnamma’s bhakti towards Tyagaraja!

To this day, thousands of Carnatic music lovers throng to Tyagaraja’s samadhi in remote Thiruvaiyaru on the banks of the Cauvery, outside of Thanjavur, to commemorate the day of his demise. “Pushya Bahula Panchami” is marked on every Carnatic musician’s calendar. In what is the world’s largest conglomeration of Carnatic musicians, they gather to sing his songs over a period of five days. It is a pilgrimage for all of them. Today, every musician worth his or her salt claims their space in the large musical legacy of his guru-shishya parampara. Tyagaraja remains immortal through the hundreds of songs he penned.

With total disregard for this great saint and composer, his house, that stood strong until a few years ago in Thirumanjana Veedhi in Thiruvaiyaru, was demolished, giving way to an ugly granite structure filled with images of local politicians. Almost nothing of his original home remains. If this were elsewhere in a musical town like Vienna, it would have become a museum by now. We in India tend to take our heritage for granted. We have a problem of plenty and the state is least invested in arts and culture, which do not generate revenue like other areas.

In popular culture, several movies have been made on the life of Saint Tyagaraja, the most popular being the one directed by Chittoor V Nagaiah, a musician and a staunch devotee himself. Biographies of Tyagaraja were written in his own lifetime by some of his direct disciples. And there have been many good and bad biographies since then. In 1961, the Posts and Telegraphs Department released a special commemoration stamp on him.

Over the last year, eminent Chennai-based historian and scholar Sriram Venkatakrishnan has been posting a series of interesting facts about Tyagaraja, his music and his life, on social media. It is amazing to know that so much about this poet-saint remains to be discovered. The prestigious Music Academy of Madras conducted a series of lecture-demonstrations celebrating Tyagaraja in the famous December music season. Scores of musicians, scholars and connoisseurs from across the world presented interesting lectures highlighting the life, the times and the music of Tyagaraja.

As the late Sangita Kalanidhi T V Subba Rao said, “Tyagaraja united the apparently opposite qualities of conservatism and progress, of reverence for antiquity and impatience of restraint, of the prejudices of the heart and the revolt of intellect. He is a classic romanticist and a conservative radical. His life in ethics and aesthetics is the evolution of perfect harmony and attunement from the discordant principles of thought and action. Nothing short of the absolute universality of his mind could have succeeded in saturating his songs with that spirit of sweetness, peace and bliss which lingers in our soul long after the sounds have faded away.”

In no other country or culture has a poet and composer been elevated to the status of a saint like the way Tyagaraja has been in India. That his songs continue to be sung in every other Carnatic concert makes them an intangible and living culture. The lyrics of his songs continue to inspire music lovers and laymen. It is in this state of timelessness that Tyagaraja continues to flourish, century after century. These are times when the concept of bhakti or devotion is easily rationalised, without even attempting to understand the nuanced nature of it. In these testing times, his songs and lyrics take us back into the realm of bhakti and remind us of the easiest way to mukti or salvation.

Through his music, Tyagaraja has attained immortality.