UP Slaughterhouses: How Effective Was The Crackdown? 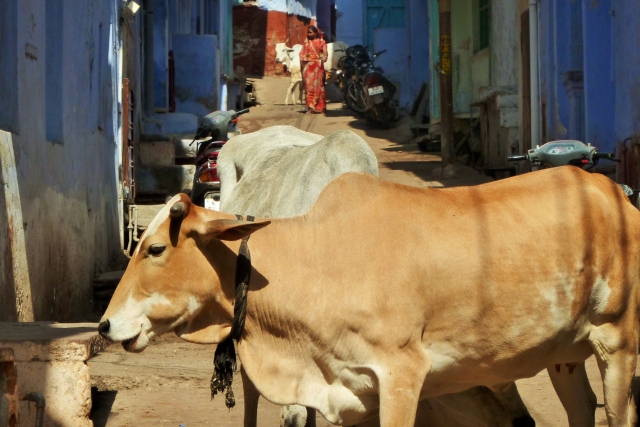 It’s a travesty that a much-needed decision of the Uttar Pradesh government on closure of illegal slaughterhouses two years ago was described as an attack on minorities. It’s equally tragic that the same decision is now being blamed for the stray cattle menace in the state.

Soon after being appointed the Chief Minister of India’s largest state in March 2017, Yogi Adityanath announced that all illegal slaughterhouses and meat shops would be shut down. The decision was panned in the media; in the dominant narrative, it was decried as a move against the Muslim community. However, the very first month of the announcement saw the administration aggressively crack down on such illegal units.

Two years later, many of those units have either reopened or managed to obtain legal status after bribing officials, according to various activists that Swarajya has spoken to.

The reopening of the units has been largely ignored, if not celebrated, in the media. But if there is an aspect of the entire issue that remains grossly under-reported, it is the ill-effects of the illegal slaughterhouses themselves. Residents living in the vicinity of such meat units say the units have been wreaking havoc on their health and environment and the drive shouldn’t have fizzled out.

An area particularly affected in western Uttar Pradesh is Meerut district’s Kharkhauda, where meat plants abound and pollution norms exist only on paper. When Swarajya visited the area last month, the ground realities were shocking. Thanks to the meat plants that have been draining blood and other waste into the ground for years, the water has been rendered so unclean that it’s unfit for even bathing or washing clothes, let alone drinking.

There are rows and rows of meat plants, often adjacent to agricultural land, running across a number of villages such as Kaul, Allipur, Setkuan, Peepli Kheda, Bijauli and Bahrampur. Residents say that the soil and water have been contaminated to the extent that sickness has become a way of life. Cancer, they say, is as common as fever.

Villagers say they cheered and whole-heartedly supported Adityanath’s decision of closing such meat plants and abattoirs. Two years later, their hopes are fading.

Ravinder Gurjar, who has been campaigning against such meat plants for more than a decade, said that even though the crackdown by Adityanath did close some plants in 2017, they were reopened after “bribing officials and local politicians”.

“None of these plants has their building plans approved by the MDA [Meerut Development Authority],” said Gurjar, who runs an organisation called Paryavaran Sudhar Sangharsh Samiti. “The DM [district magistrate] and all the officials have been paid to keep mum. Regional MLAs and the MP don’t have a word to spare on this,” he said.

According to Gurjar, around 80 villages in Kharkhauda, home to over 1 lakh people, are affected by the plants.

Swarajya’s visits to several other pockets in western Uttar Pradesh revealed a situation similar to Kharkhauda. For instance, in Agra district’s Mantola area, an illegal slaughterhouse was found operating right in the middle of a bustling residential colony. Towering walls managed to hide the activities from public view but the drains were clogged with the waste.

Residents told Swarajya that soon after the announcement in 2017, a team of officials came and inspected the site but no action was taken. “This slaughterhouse has been operating illegally for many years. Most of the work is carried out in the morning around 6 am and they simply dump the carcasses in the open. It stinks so badly that children are forced to take a longer route to reach school,” a resident said, requesting not to be named. “In the hope that Yogi ji is serious about the issue, we gave several written applications to the police and district magistrate but nothing happened,” he said.

Residents said that slaughterhouse owners across the district have “bribed” police and officials into silence.

The presence of such units means hell for the residents. Activists and trade insiders say that such units blatantly flout rules laid down for their operations.

Effluent treatment plants are mandatory for all meat plants but none exists, a meat plant worker in Kharkhauda told Swarajya. He said that all the waste is pumped underground through borewells.

Gurjar informed that before the crackdown, all this waste was dumped into the drains and fields. But now, the meat plants no longer release their waste into external drains. “Now these plants have dug borewells within their premises, and they pump their liquid waste into the ground. No eyebrows are raised as it’s not visible to outsiders,” said Gurjar.

But while this may seem like a relief, given that the meat plants don’t litter the streets anymore, environmentalists say that this is polluting soil and water even more. In the affected villages, the very element that once facilitated their settlement, water, now torments them.

Radheshyam Sharma, a resident of Kaul village, said that the state of the groundwater has become so bad that the government itself stopped installing handpumps long ago. As an alternative, the government built an overhead water tank 2 km away but its supply is erratic and simply not enough. Rekha Devi from Kaul village said the tank provides water only once a week. “At times, we don’t get it for 15 days in a row. So we store as much water as we can whenever we get it,” she said. Some well-off villagers, like Rekha Devi’s neighbour Yogendra Kumar, have built large underground cement water tanks to store water, but others are forced to either borrow water or turn to the handpumps as a last resort.

Post crackdown, meat plants have made another change in their modus operandi, one that could further add to the water woes of the residents in the near future. In order to reduce waste, they have started to sell most of the solid waste as eatable, and it’s consuming a large amount of water.

A trade insider, speaking anonymously, told Swarajya that these days, parts of animals that were earlier thrown away as waste are now being supplied to the market. “Leave aside the heads and nails of the chicken; hoofs, horns, and skin of cows, buffaloes and goats; and scrotum in the case of male animals. Everything else is now being consumed and, therefore, has commercial value,” he said. “Their intestines would earlier be discarded, but now they are consumed.”

A meat plant worker confirmed this. He said that intestines, particularly that of buffaloes, are in demand abroad, particularly in China, and are thus an essential part of their exports. The insider said that while “upper classes” eat the “better” parts, such as the chest, leg, and back of the animal, “lower classes” eat the “waste” parts, too. “They clean intestines in boiled water and eat it after filling it with spices. Skin of the chicken, earlier discarded as a practice, is now roasted and eaten,” he said. He said that such consumption by the “lower sections” was earlier catered to by small-scale local butchers, but now even large meat plants have begun supplying this “waste” to the market. He admitted that this trend has adverse side-effects, as it not only increases the liquid waste, which is drained into the ground, but also uses far more water in the processing of the “waste”.

Lack of water and increasing cancer cases are only some of the concerns of these villages. They are affected in a number of other ways as well. A farmer in Allipur said his sugarcane could barely produce jaggery, which he blamed on polluted soil. Another resident said his sons could not get married as “no father would be willing to send their daughter to a place where meat plants abound”.

Villagers said that “adamkhor kutte” or flesh-eating dogs around meat plants have been a nightmare. Dogs feeding on flesh often fatally attack villagers tending to their farms along the kali nadi. They recounted several cases of farmers being killed by such dogs, something that has made it to the local press in Meerut.

It emerges that slaughterhouses are central to the woes of a host of villages. But since the meat trade primarily involves the Muslim community, the discourse around it is highly politicised.

When the crackdown saw the closure of two of such meat units owned by Bahujan Samaj Party leader and former Member of Parliament Shahid Akhlaq, he described it as “an excess against minorities”. This is exactly the line that the mainstream media took after similar actions against illegal units.

Amid this, voices from the Muslim community protesting meat units have completely drowned out.

In Meerut’s Muslim-populated Aadh village, the residents struggled and got a meat project shelved. Mohammad Shaukeen, pradhan of Aadh village, told Swarajya that some years ago, a meat plant was being set up in their village, but the project was shelved after villagers protested and even clashed with construction workers on the site. “The meat plant would have been a disaster for us,” Shaukeen said.

Now, an attempt is afoot to decry whatever little the crackdown has achieved in the two years, again ignoring real voices from the ground. In December, residents of some villages in Dadri tehsil of Gautam Budh Nagar district rounded up stray cattle and stuffed them in government school buildings.

The abandoned and stray cattle had been running amok in their fields and ruining their crops. Reports of the incidents squarely blamed the crackdown on slaughterhouses, the argument being that as the abandoned cattle is no more being butchered in the abattoirs, their numbers are swelling up and proving to be a nightmare for farmers.

However, Swarajya’s visits to these villages revealed a picture quite contrary to the dominant narrative. Almost all the farmers that we spoke to, supported the curb on meat trade and praised the Adityanath government for it. The farmers, including Muslims, supported the closure of illegal units, called for fining those farmers, who abandon their cattle once they stop giving milk and demanded the setting up of gaushalas to shelter the stray cattle. Ali Hasan, a resident of Kalonda village, said that earlier, just about anybody would set up a meat shop or start butchering cattle wherever he liked. “There was just no control over it. It used to be dirty everywhere. There is thankfully respite from that now,” he said.

Veer Singh from Mahawad village said that under the erstwhile Samajwadi Party government, smugglers had a free run who not only picked up stray cattle but also targetted their milch cattle, brazenly stealing cows and buffaloes from houses. “I could hardly sleep in those years. The smugglers would come in groups of 10, 20 or even 50, enter our houses with pick-up vehicles and take the animals away. They would come armed and no villager had the guts to stop them,” he said. “Now I sleep peacefully,” he added, a sentiment echoed by many.

It’s quite evident from our visits and conversations with villagers that Adityanath’s diktat on slaughterhouses was a much-required step, only that it has failed in execution. But while it’s true that the illegal trade hasn’t exactly been brought down to its knees, a much-needed dent has been made.