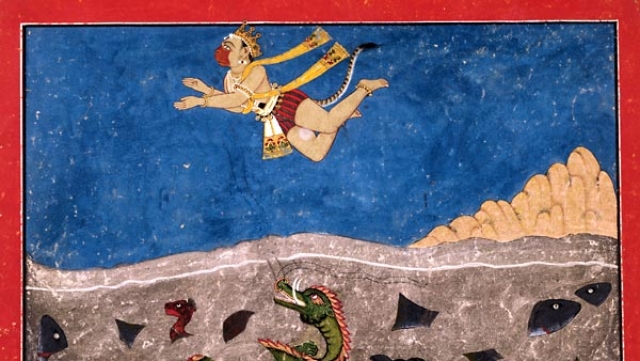 I was in second grade when I saw the then newly-released Kannada movie, Sree Ramaanjaneya Yuddha, in Tumkur, in 1963. One scene from the movie is still imprinted in my mind’s eye: Anjaneya baring his heart to show Rama that he, Rama, is always in his (Hanuman’s) heart. As a seven-year-old, some of the melodramatic moments were too difficult to comprehend, and I believe, my brothers and my sisters, along with my mother, were crying into their handkerchiefs as we watched the movie.

My mother is a talented storyteller, and she would sit us down, all five of us, and tell us tales from the Ramayana and the Mahabharata as well as the retelling of them in the works of such authors as Devudu Narasimha Shastri. She would keep us mesmerised as she wove the kind of details from the epics only people from her generation seemed to so easily recall. And never, ever, were the gods “Monkey God”, or “Lion God” or “Elephant God”. Those diminutions and reductions came much later, in newspaper articles and Western books, crude and cringe-worthy for those of us who knew and revered the beloved Hanumantha/Anjaneya, Ganesha/Ganapathi, the feared Narasimha in his ugraavatara, and prayed to his benevolent appearance as Lakshmi-Narasimha.

Not knowing then anything about “magic realism”, we, my siblings and I, were transported into magical and mystical worlds. We believed deeply in the reality and the glory of the gods till adolescence and a new world unmoored us and took us into the worlds created by Western authors, Nehruvian socialism, and science, and newspaper-spun “reality”. And, till recently, there were few attempts to recreate and rediscover the worlds of the gods, and of the sages, kings and rulers of yore, who believed and worshipped the gods of their times. The world of Indian writing in English was taken over by the sceptical, the clever, the Westernised, and the tellers of the tales of the “ordinary” men and women in their quest for happiness in an unreasonable world. The gods were mocked, caricatured, or simply forgotten. The sages and the kings were reduced to their “material” selves by Marxist historians and angry feminists, who believed that while the new “magic realism” should be celebrated and copied in their own work, the old was just junk to be discarded into the dustbin of Hindu “make-believe”.

Then change began to happen about a decade ago as more Indians travelled abroad, more discovered their own talent in writing, and more began to read the books that their parents and grandparents had stored away in the attic. The curious new Hindu began to connect with others with similar tastes and talents in the age of emails, discussion lists, and the newer age of social media. And thus we have now begun to see books appear on bestseller lists like Amish Tripathi’s The Immortals of Meluha, Scion of Ikshvaku, etc.; Kavita Kane’s Karna’s Wife; and Ashok Banker’s multi-volume retelling of the Ramayana. Then we began to see newer talent, like Sumedha Verma Ojha, with her gripping tale Urnabhih from the times of Chandragupta Maurya, and Saiswaroopa Iyer’s imaginative recreation of Lord Krishna’s times in Abhaya.

In this genre now comes the first in a promised trilogy, Saraswati’s Intelligence: Book 1 of the Kishkindha Chronicles. Vamsee Juluri, a scholar of media studies, whose Rearming Hinduism generated a surge in Hindu consciousness recently, is an inspired storyteller whose quest seems to be to imagine for us the world before the familiar worlds of the gods we are accustomed to, and to breathe into that world a new magic, and a value, that is both as ancient as the gods and as trusted as the imagination and experiences of our sages. Thus appear Hanuman and Ganapati, Vaali and Sugriva, Vashishta and Vishwamitra, and many others in a land that is old—Kishkindha—but in tales that are freshly minted magic.

What is it about a world where the spilling of blood, even by accident, is apachaara? And what indeed is apachaara? What English word can capture the weight and the meaning and the contexts of an apachaara? A trespass? A fault? A deviation? An offence? An insult? A discourtesy? A disregard? It is all, and more, and more so in the nuanced contexts that apachaara happens. If the spilling of blood is mahaapachaara—a major offence—which Sugriva is accused of by his own brother Vaali, then is that a presage of what is to happen in the Ramayana? But we are jumping ahead, and that would be a distraction from the tale of Saraswati’s Intelligence in which we might see the country and land of Kishkindha before the advent of man, and of a land that is threatened by “creatures” who resemble man, of the species Homo sapiens and related to the Neanderthals. We can conjecture, but going that route will rob us of the magic of maya and myth, fable and mystery in this well-paced package of life’s meanings before there was human life, or in the times before humans told their tale of their experiences and their desires.

And yes, some readers might opine that Hanuman is a member of the species Ramapithecus, but what would they then make of Vaishnavi, the princess of the kingdom of the feathered birds, or of Vashishta and Vishwamitra with their “balance”? And a balance is not a tail, as so many simple-minded men might think of it as, but a balance is a balance is a balance…and we might be forever indebted to Vamsee Juluri for this twist in the tale of Hanuman, Vaali, and Sugriva, and of their times before their presence in the epic times that we are familiar with. Or maybe not. Let us see where the good professor of media studies takes us in the next two books in this trilogy.

In Saraswati’s Intelligence we have our familiar gods, their attendants, and the great sages in forms and in situations that are, for lack of a better word, utterly human. In reading this tale, thus, we are taken on a journey where we begin to rethink humanity, dharma, and the pursuit of the good and the orderly, of good order, and of connections to beings around us and among us. How do we treat them, what relationship do we have with them, why are our lives bound by theirs, and how are our lives threatened sundered from them?

In these times of conflict, confusion, and an abundance of distraction, Saraswati’s Intelligence is an antidote to surfeit and to jaded reality. It is a contemplation on Parama Dharma. It is an addition to what one hopes will be a new age of Hindu-Indian magic, mystery, and fable to match the imagination of their sages of yore.