Varsha Ritu: The Season Of Love And Romance 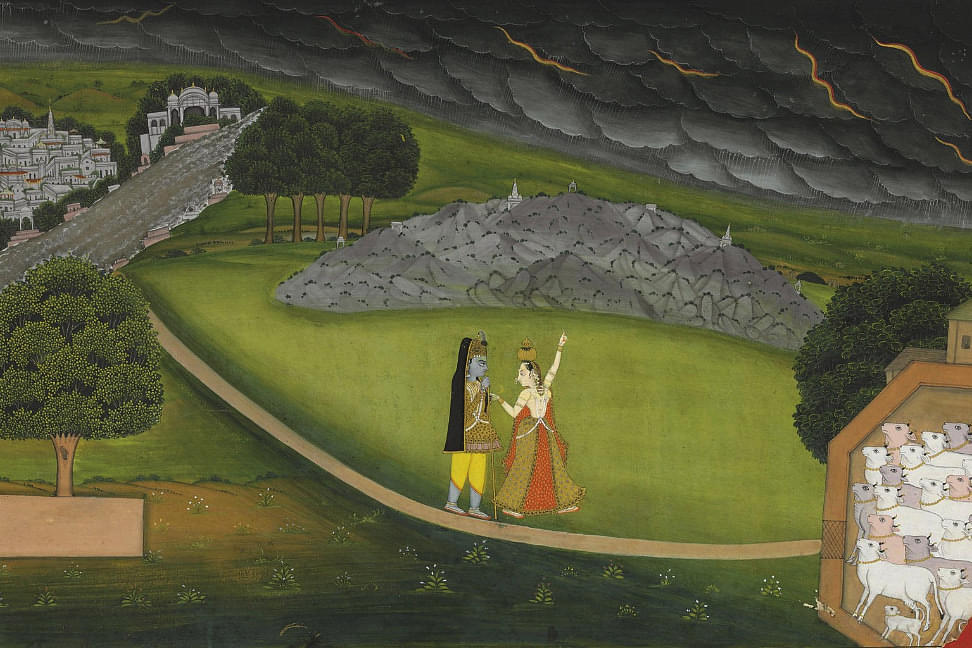 The rains are upon us. Monsoon, varsha or praavrish is one of the six seasons or ritus of the year which fall into two sets of three. Shishira, vasant and grishm are part of the Uttarayana, the time of taking in, while varsha, sharad and hemant form the Dakshinayana, which is the time of release or visarga, dominated by the moon, soft, juicy, and invigorating.

It is the shringar rasa that finds its acme during this time. To appreciate this season of love, we need to understand the concepts of ritu, rasa, shringar and the close relationship of the psyche to nature in the Indic way of life.

It is an Indic peculiarity that life and philosophy are closely integrated and intertwined with nature. Emotions are understood, articulated, and expressed through nature and the changing seasons.

Ritu carries the sense of the correct time for certain actions. So, what is varsha ritu good for, what actions provide for the satisfaction and feeding of deep human emotions in this season?

Vasant is predominantly associated with shringar rasa but varsha is not far behind either.

Although this is not an exposition on aesthetics, but just a trip through the season of love and romance, a short and simple digression is in order to improve our understanding of varsha ritu and its many moods of love.

Rasa includes both the artistic process of production and the aesthetic process of enjoyment. It is the objective embodiment of the first which creates the second. It is an essence of the universe.

All of us have deep instincts of thought, action and experience, which generate impressions unique to us called samskaras. These samskaras are organised around emotions; the sthayi or permanent emotions are the nava rasas, the nine basic emotions - shringara, hasya, karun, veera, bhayanak, bibhatsya, adbhuta, shanta and raudra.

Certain stimuli are needed to cause these emotional responses which are called vibhavas. These are characters or situations which determine and define the complex feelings which arise within us. These can be poetry, music, art, paintings, flowers, and other aspects of nature.

Shringara is the queen of rasas. The meanings of these two words, rasa, and shringara are many. For now, suffice it to consider them in the context of seasons and emotions, as we are doing here.

Shringara is love, longing and desire, often within the locus of sexual love, separation and unfaithfulness. It can also be vatsalya or love for a child and sometimes bhakti, as explained by different commentators.

The literal meaning of shringara is horn or peak, it is the peak or climax of delight borne out of deep feelings aroused and supported by many vibhavas, the manifestation of the season being one of them. Varsha is the season when thoughts turn to love and longing and emotions relating to the beloved surge.

Given the visceral relation of nature and the Indic psyche, it is natural that the season, which affects the atmosphere, temperature, plants, animals, the beauty of rivers and ponds, woods and fields, influences and stimulates these feelings in the most comprehensive way possible.

Whether we look at literature in Sanskrit or Prakrit or Maithil or Tamil or Telugu, the Meghadutam or the Gatha Saptasai, the Purananuru or Vidyapati’s love poetry, the delicate but strong skeins which wrap nature together with emotions and the central part played by the latter stand out in terms of significance.

In this introduction to shringara and ritu we will concentrate on poetry, specifically on Sanskrit poetry. From the vast repertoire, only the smallest flavour can be provided in this brief article.

The world and our perception of it changes with the advent of the rains, and different emotions fill the air when specific festivals, dress, and food make us enjoy this particular time of the year. At the centre of it all is love and romance with its twin flavours of sambhoga or the meeting of lovers, and that of separation or vipralambha which is made unbearable by the nature of the season.

There is a veritable cornucopia of riches to choose from when looking for ritu kavya in Sanskrit. I will restrict myself to a few examples.

The Ramayana of Valmiki is so often thought of as part of the sacred scriptures of Hinduism that its heart as a pillar of Indic civilization — an exposition of how society, culture, history, geography, people, flora and fauna weave into each other and become that delicate Indrajaal that we recognise as Indic — is forgotten or ignored.

All the seasons find a place in this work but it is in the Kishkindha Kaand that varsha ritu comes into its own in an emotive and stunning exposition of the vipralambha shringar. Shri Rama, separated from his beloved Sita laments for her on the banks of the Lake Pampa. The earth, freshly washed by rain and wind, the trees, glistening, the clouds, dark and heavy with water, the lightning, sharp, heighten the emotion of love and longing. At this time, Rama remembers their time together, as every aspect of nature reminds him of her grace and how she would run into his arms at the white gleam of lightning and the roll of thunder. His agony becomes unbearable and his brother Lakshman has to console and cajole him out of his deep sorrow. It is notable, however, that even in the grip of sorrow, the beauty of the season does not fail to strike Shri Rama; the loss of his beloved is framed by the lushness of the season.

The Harivamsha has the story of Pradyumna, son of Devi Rukmini and Shri Krishna, and Prabhavati; Kama and Rati in a different incarnation. This is the acme of sambhoga shringar. Pradyumna describes the season to his love, the pleasure of their union reflected in the unfolding of the rains; each protean change in the aspect of the rivers, their sandbanks, trees and plants, the clouds and moon, the saras, chakravaka and kokila birds, the kutaja, kakubha and kandali flowers find a parallel in Prabhavati who he sees before him and are reflected in her alluring and enticing form.

The Ritusamharam describes all the different seasons of the year, but love beckons during the monsoon. Samagato ghanagamah kaamijanpriyah priye - ‘monsoon, dear to those in love’ is the way the naayak introduces this season to his naayika. It has Kalidasa’s signature connect with nature, his use of sublime upmas (which do not bear up well under translation). There seems to be the lingering influence of Valmiki on this composition.

I must end with the thunderous crescendo of varsha in ritu kavya with Kalidasa’s Meghadutam.

It is impossible for my humble hand to convey the journey of the megha or monsoon cloud as it moves from the lonely yaksha on his mountain peak in Ramtek towards Alkapuri on Mount Kailasa. It is about the sweep of the monsoon across the land of India taking in all the sights and sounds below. The description of people, places, geography, history, men women, flora, fauna is unparalleled and must be read to be appreciated. Love for the land showers from the words as the skies open up and the clouds discharge their burden during shravan. The love of the yaksha for his virahini wife is a metaphor for the love of the water for the land as it cascades, gushes, showers and flows in gay abandon.