Review: Akshay Kumar’s Laxmii Has An Islamic And Anti-Saffron Propaganda Written All Over 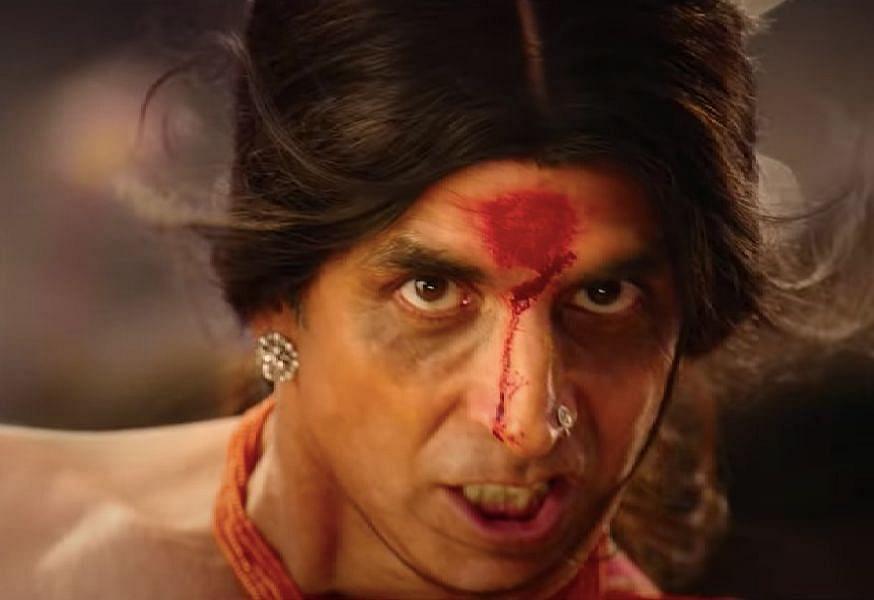 A Still from Laxmii

Two days into its release, the film Laxmii has been dismissed as “trash” and “nonsense” by most reviewers. It’s been called a terrible film on every count – be it the story, its execution, performance and dialogues. We are in complete agreement with this assessment, only that the largely left-wing film critics have steered clear of commenting on the film’s worst part – its blatant Islamic and anti-Hindu agenda.

The only saving grace is that the film is not half as sophisticated as Aamir Khan’s pk, and families are unlikely to sit through its entire length.

In one of the early scenes, we learn that Rashmi (played by Kiara Advani) had eloped with Aasif (played by Akshay Kumar) three years ago but the happily married couple has not been accepted by her bigoted parents till date. Aasif’s brother and his wife died in an accident leaving a child with him and Rashmi.

The child has no role in the story and disappears without explanation as soon the film gets busy with ghosts, but serves a crucial purpose. When Aasif reveals that Rashmi’s father is reluctant to accept him because of his religion, the precocious child exclaims - “Wo abhi bhi Hindu-Muslim mein atkey huey hain! (They are still stuck at Hindu-Muslim!)”

A message, loud and clear, is sent to the audience that Hindu parents opposing elopement of their 20-something daughters, particularly with Muslim men, are dogmatic and bigots who have not evolved since partition. Even if the men are 50-year-olds. Even if Priyas and Ekta Jaswals ending up dead and buried in ground are an everyday reality.

A previous scene where Aasif exposes a Hindu Tantrik as a fraud who fools gullible people in the name of pret aatmas sets the tone and narrative for rest of the film – supremacy of green over saffron.

So when a Hindu family abandons their minor son for displaying effeminate manners, an Abdul chacha adopts him and gives him a respectable life as a kinnar. When a molestation happens in a Hanuman temple, the Abdul chacha saves the kinnar from taking law into her hands. When saffron-clad sadhus fail to free Aasif of the vengeful ghost of Laxmii, Muslim pirs and fakirs do it easily. When Laxmii’s ghost finds herself unable to enter a Devi temple to extract revenge from her killers, Aasif does the honours.

The film is a tale of revenge of a transgender woman named Laxmii from a couple who illegally occupied her land and killer her. It is a remake of 2011 Tamil film Kanchana, directed by and featuring Raghava Lawrence.

Perhaps nothing gives away the religious agenda of the makers of Laxmii better than the subtle changes made to the original Kanchana.

In Kanchana, the hero is named Raghava who spends his time wooing Priya, sister of his sister-in-law. In Laxmii, the hero is Aasif who is married to Rashmi. Later, Rashmi’s father realises his mistake of rejecting Aasif.

In Kanchana, Raghava fears ghosts and turns to Hindu gods when feeling scared. In Laxmii, Aasif exposes Hindu sadhus as frauds. In a song-and-dance sequence, Aasif disrobes ghosts to reveal their saffron lowers.

In Kanchana, the Rahim bhai who adopts a young kinnar is an alcoholic. In Laxmii, the one who is alcoholic is Rashmi’s mother. Abdul chacha sips only tea.

In Kanchana, a Hindu school principal supports education of a transgender child and applauds her publicly. No such character is there in Laxmii. In fact, besides Abdul chacha, no one supports Laxmii.

In Kanchana, the kinnar is a devotee of Bhagwan. Just before she is informed that her land has been illegally occupied, she is garlanding her deity. That scene has been dropped in Laxmii.

In Kanchana, the villain couple visits a baba who is clad in white. In Laxmii, this baba wears saffron with Jai Shri Ram loudly printed on it. He also readily agrees to help the couple despite their criminal past.

In Kanchana, the ghost of the kinnar pleads to Bhagwan Narsimha to let her inside the temple in the climax. The ghost tells Narsimha to destroy her if she is on the side of adharma but make way for her if she is on the side of dharma. Narsimha chooses the latter. Kanchana’s ghost enters the temple, catches the villain but, to maintain the sanctity of the place, drags him out and kills him. In Laxmii, the ghost screams – “Laxmii cannot enter the temple, but Aasif can!” And so, Aasif barges into the temple, desecrates it and breaks a pillar before murdering the villain. No Kanchana-like Bhagwad Geeta shloka plays in the background in Laxmii.

If Kanchana has a feel of Nehru-style secularism, Laxmii is laced with Jinnah-like open communalism. If Kanchana has a ‘good Hindu-bad Hindu-good Muslim’ theme, Laxmii has a ‘bad Hindu-worse Hindu-saviour Muslim’ propaganda.

All Hindu-friendly scenes of Kanchana have been discarded like waste in Laxmii. In addition, Laxmii promotes Muslim occult practitioners. We would have dismissed it as silly if we did not know its real life consequences. In reality, the murky vashikaran and pret aatma industry is overwhelming run by Muslim pir babas and fakirs. In Laxmii, the Muslim pir babas and fakirs are not frauds but the real deal. As we write this, the police in Uttar Pradesh’s Barabanki have arrested one Mohammed Firoz and his assistant Mohammed Haneef for making a father named Mohammed Alam kill his little daughter as a black magic remedy.

The film’s portrayal of transgenders too is unflattering. If Bollywood must make a movie on kinnars only once in a decade, it’s not a great idea to show them as killing machines. If in the original Kanchana, it is one transgender ghost avenging its killers, in Laxmii, a mob of transgenders is shown dancing crazily and participating in the murder as a religious ritual. Such scenes might instil in people a fear of kinnars, a community that is already marginalised due to unfounded prejudices.

Laxmii’s ghost kills people in a most brutal fashion as almost all such scenes are lifted from cult Hollywood classics such as The Exorcist and superhit films like ‘It’. A ghost emerges out of a dirty refrigerator a la It-style; Laxmii hits and buries a head inside earth a la Kung Fu hustle-style; her ghost slices a man in two equal halves a la Kingsman-style.

Talking of ‘inspirations’, we must also mention the promotional song ‘Burj Khalifa’ that, needless to say, appears out of context. Filmed in Dubai, the song has sets blatantly lifted from Loco Contigo released last year with dress and dance steps lifted from another hit song Uptown Funk released in 2014.

Laxmii is a bad film, but with a superstar like Akshay Kumar leading it, the film will reach huge audiences and so will its religious propaganda. That really seems to be the idea behind making it because certainly, no creative person who views her job with some level of seriousness and respect, can produce such work and call it art.