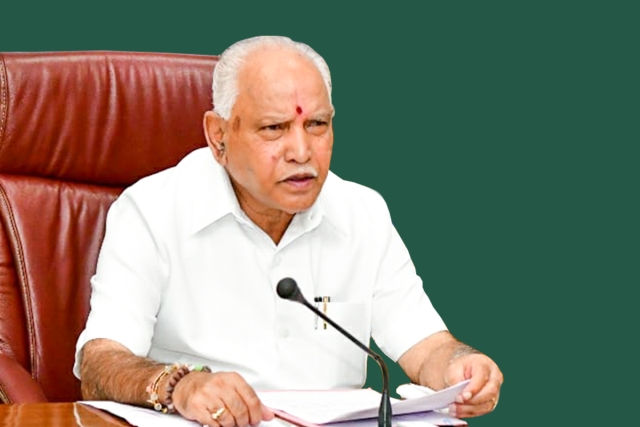 In a record of sorts, Karnataka Chief Minister B S Yediyurappa held an almost nine hour long meeting with his expanded cabinet, district collectors, regional commissioners and chief executive officers of gram panchayats on Wednesday to ‘fast track’ development works that had taken a back seat during the pandemic period.

The 78-year-old Chief Minister addressed the media after the meeting seemingly impatient at the delays in the development works in the state.

“We have lost almost 10 months, thanks to the coronavirus. Now there is a need to hasten developmental tasks, and ensure the results of the projects undertaken are achieved as intended,” said Yediyurappa.

“If the administration is active and efficient at the gram, taluk and zilla panchayat levels and the problems of the people are solved in their local places, there will not be any need for people to come to Bengaluru with petitions seeking solutions,’’ the Chief Minister said.

He elaborated on the development works and funds released for various schemes so far:

Pension and ration that is being credited under the social security scheme to even those who have died have been stopped. Since almost all benefactors now have been linked via Aadhaar, officials have been instructed to link and verify the status through the e-Janma portal and check the leak in funds within one month.

A total of 2,741 undocumented settlements have been identified by the district authorities to be converted into a revenue village and a preliminary notification has been issued to 1,419 villages. On the whole, 803 final notifications have already been issued, the rest have been instructed to be issued within one month.

“I have instructed that we focus on priority issues such as the Covid vaccine campaign, agricultural input subsidy distribution, housing for flood victims, solid and liquid waste management in village and urban areas, drinking water schemes, implementation of central government schemes,” said the Chief Minister.

Yediyurappa added that the officials have been instructed to fast track the farmers’ registration to enable final dispensation of farm input subsidy payments.

The CM added that legislators have been asked to complete two-year-old projects pending under the legislators’ constituency development fund and provide swift approval for action plans.

“It has been instructed that a progress review meeting will be held with the legislators and district officers chaired by the district-in-charge minister once in every three months,” he added.

In order to raise resources to fund the development works in the state, the state is looking forward to clear government land that has been encroached upon, especially in Bengaluru.

“Encroachments have been cleared with respect to only 2.70 lakh acres of government land though a total of 14.18 lakh acres have been encroached upon in the state,” the Chief Minister noted, adding that officials have been instructed to “clear government lands worth crores of rupees in Bengaluru and then auction them”.

Stressing on the need for swift resolution of problems pertaining to land acquisition that were hampering national highway projects, the Chief Minister said officials have been instructed to resolve the 14,000 pending litigations at the earliest.