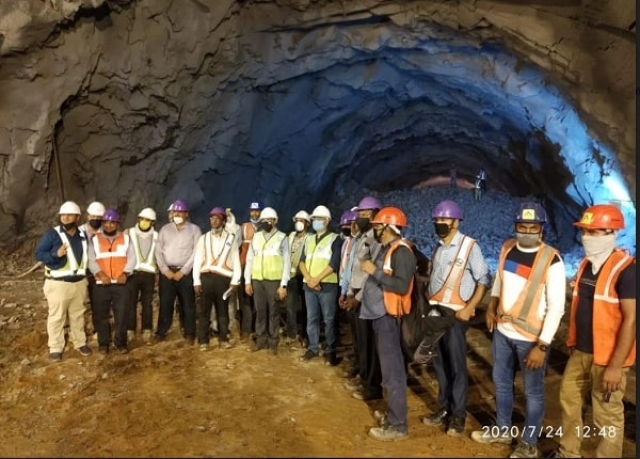 The engineers at the site of the tunnel.

Executing freight works on a fast track mode despite the pandemic, the Dedicated Freight Corridor Corporation has completed the caving work for the world's first electrified rail tunnel meant for running double stack containers through Aravallis.

An engineering marvel, the D-shaped one-km-long tunnel near Sohna is part of the Rewari-Dadri section of the Western Dedicated Freight Corridor which connects Mewat and Gurugram in Haryana and negotiates a steep gradient on the uphill and downhill slope of the Aravalli range.

Thanking the engineers and the staff involved in the project for completing the tunnel work in record time, DFCC Managing Director AK Sachhan said it is the first-of-its-kind double-line electrified track for double stack freight train operation in the world.

Engineers had to blast through 2,500 to 500 million-years-old proterozoic rocks to build the electrified double-stack container tunnel.

The last blasting was completed on Friday. The electrified route would facilitate higher haulage at increased speed, Sachhan said after the tunnel breaking ceremony, which marks the completion of the tunnel caving work started a year ago.

Double stack containers with 25-tonne axle load freight trains are expected to run through this tunnel at a speed of 100 kmph after a year, according to DFCC, the implementing agency of the project.

Western DFC runs through 1,468 km from Dadri in Uttar Pradesh to Jawaharlal Nehru Port in Mumbai, while the Eastern DFC is 1760-km-long from Ludhiana in Punjab to Dankuni in West Bengal.

The entire corridor will be free of level crossings and the freight train operation would be on an advanced automatic signalling system.

The Western DFC is meant to connect the proposed Delhi-Mumbai Industrial Corridor and Multi Modal Logistic Hubs along the route.

According to the DFCC, tunnelling work has been done systematically and in a planned manner from both the ends by deploying high technology and machinery, which is the reason behind completing the caving work in a record one-year time.

There are a total of six tunnels in both the Eastern and Western Dedicated Freight Corridors.

DFCC has run more than 1,600 trains in the Bhadan-Khurja section of EDFC and the Madar-Rewari section of WDFC till date.

Despite the Coronavirus pandemic situation, work is progressing at a fast and resolute pace in DFCC.

The Eastern (excluding the PPP section) and Western DFC is slated for completion in June 2022.