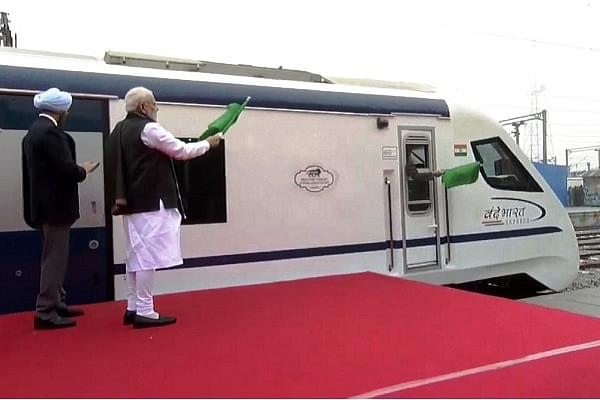 Chinese state-owned CRRC Corporation, in a joint venture with an Indian firm, is among six companies in the race to bag an over-Rs-1500-crore Vande Bharat train project.

Apart from the Chinese, no other major global players came forward to participate in the prestigious train set project initiated by Indian Railways to introduce world-class service for passengers.

According to Railway sources, the Chinese joint venture entity is likely to be disqualified as per the ‘Make in India’ guidelines of the government.

China-based CRRC Yongji Electric, in a joint venture with a Gurugram-based company, is now called CRRC Pioneer Electric (India) Private Limited, and five other contenders are being shortlisted for the ambitious train set project, according to the Railways.

“We have got bids from six players for the train set tender,” said Vinod Kumar Yadav, chairman of the Railway Board.

The development comes at a time when India and China are carrying out disengagement of troops along the Line of Actual Control (LAC) in Ladakh, where 20 Indian soldiers were killed in a violent face-off with the Chinese troops last month.

Following the standoff, the national transporter cancelled a Rs 471-crore signalling and telecommunication project for a stretch of 417 km on the Kanpur-Deen Dayal Upadhyay section by a Chinese company and also scrapped a tender for thermal screening cameras after Indian vendors complained of the bid document favouring the Chinese.

The next course of action is to award the contract after technical evaluation of each bid.

The first 16-coach Vande Bharat Express, the locomotive-less train between Delhi and Varanasi was flagged off by Prime Minister Narendra Modi on 15 February with much fanfare.

Manufactured at an estimated cost of Rs 100 crore, the Vande Bharat service is equipped with top notch facilities, such as automatic doors, wi-fi availability and CCTV cameras and many other advanced features.

Though the train set project had generated a lot of interest in the rail industry, with many global players participating in the pre-bid meeting and discussions with Railway authorities, surprisingly, companies such as Bombardier, Alstom, Siemens, CAF, Talgo and Mitsubishi did not participate in the bids.