Explained: As Simlipal Forest Fire Rages For Over 10 Days, Here's What Triggers Such Fires And How To Combat Them 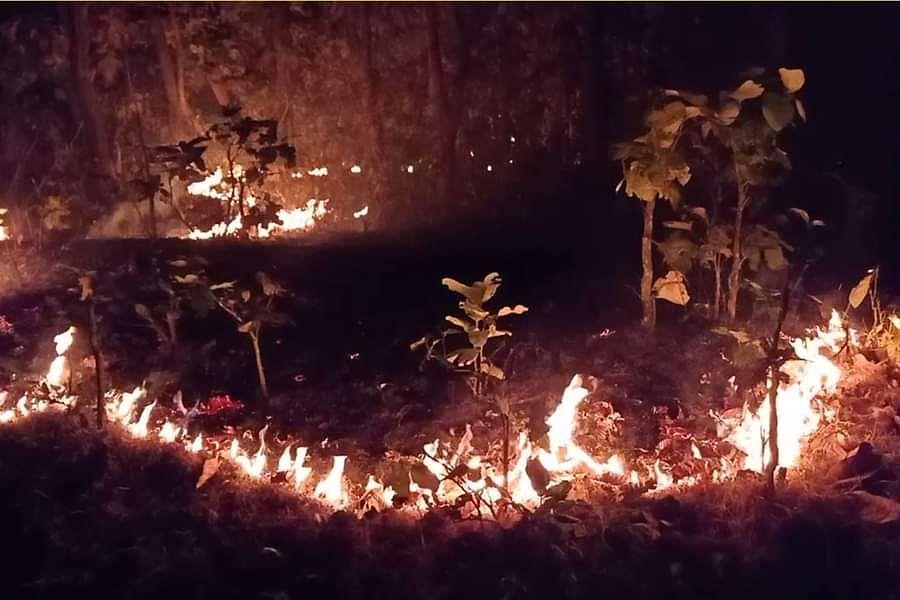 Dry weather conditions bring fire to the forests and Simlipal in Odisha is no exception.

For more than ten days, fires have been raging in the Simlipal forests. A total of 399 fire points have been identified in the fringe areas bordering the forest, close to the villages, Maloth Mohan, the Regional Conservator told Indian Express.

A national park and a tiger reserve in the Mayurbhanj district covering around 3,000 km² of area, Simlipal lies in the eastern end of the Eastern Ghat and derives its name from the abundance of red silk cotton trees growing in the area.

Simlipal hosts about 3,000 species of plants, including 94 species of orchids. The identified animal species include 12 of amphibians, 29 of reptiles, 264 of birds and 42 species of mammals, including the Bengal tiger, Asian elephant, Gaur, and Chausingha.

The cause of the fire

The Simlipal forest reserve area frequently witnesses forest fires during dry weather conditions. Generally, with the onset of summers and towards the end of autumn, the forest area remains vulnerable to forest fires.

This duration also coincides with the shedding of leaves in the deciduous forests. The dry fallen leaves are more vulnerable to catching fire and facilitate its spread quickly over the entire forest area. With dried leaves and tree trunks, even a spark can lead to a raging fire.

The months of January and February witnessed little rainfall, and the sudden and advanced heat wave with the early onset of summer in February acted as the perfect fuel.

Reportedly, drastically rising temperatures have contributed to Odisha having the highest number of forest fires in the country for a week. More than 5,000 forest fires were recorded in the state between 22 February and 1 March.

The fire can be started by a natural cause like lightening strike, however, more often than not, they are a result of man-made causes.

For example, ignited cigarettes and beedis thrown on the dry ground, fire set up by poachers and hunters to divert the wild animals, etc.

Villagers also set up fire to clear the dry leaves on the ground for easy collection of mahua flowers which are used to prepare an intoxicating drink. Villagers also believe burning patches of Sal trees will lead to better growth when planted again.

How is forest fire controlled?

Usually, rains act as a natural control to the forest fires. However, it is the responsibility of the fire department to keep the forest fire under control.

Reportedly, this year, the forest department intensified its mitigation measures and formed a squad each for 21 ranges across the five divisions to closely monitor the situation. 1,000 personnel, 250 forest guards were pressed into action.

Forty fire tenders and 240 blower machines were used to contain the blaze. Awareness programmes are also being initiated at a community level to prevent such incidents.

The measures include creating fire lines (strips cleared of vegetation to stop the spread of the fire), clearing-off dried biomass, crackdown on poachers, forecasting fire-prone days and including community members.

"Like every year, fire points in the forest have been reported during this season. This year too it is being reported. We prepare for these beforehand by forming special squads from 15 February and as we get the satellite information regarding the fire spots, we communicate it to our field staff and accordingly they move to extinguish the fire," Principal Chief Conservator of Forest (Wildlife) Sashi Paul was quoted as saying by India Today.

"We have stationed around 1,250 men which including forest department staff and fire watchers engaged on daily wages. Fire protection squads have been formed. They have been equipped with vehicles and fire blowers. Even 40 vehicles of the Forest Department have been pressed into action,” he added.

Reportedly, the Simlipal authorities claimed that the core area of the sanctuary is safe and secured while the fire that broke out in the buffer zone and foothill areas is under control now.