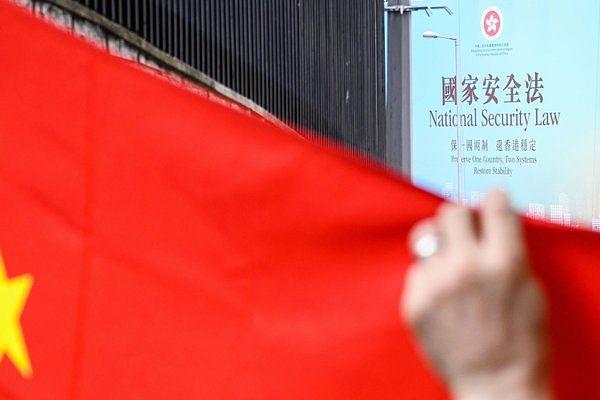 New security law has been introduced in Hong Kong by China (Source: @TruthAbtChina/Twitter)

China has reportedly made its first arrests under the new sweeping national security laws imposed on the autonomous region of Hong Kong on Wednesday (30 June) night (local time 23.00).

Yesterday, people took to the street to protest the laws in the busy shopping district of Causeway Bay amidst heavy security presence. Riot police fired pepper spray into the crowd, kettled and dispersed protesters, and deployed water cannons.

Hong Kong police made the first arrests under the new law, including a man who was holding a black independence flag, and then a woman with a sign reading "Hong Kong Independence."

Reportedly, at least 70 people were arrested on Wednesday.

When the bill was first introduced in May this year, thousands had come out on the streets to oppose the law, chanting slogans for “liberation” of Hong Kong from the China. The police had dispersed the march within an hour using tear gas.

What is the new law?

According to a BBC report, the details of the law's 66 articles were kept secret until after it was passed. Even the territory's Chief Executive, Carrie Lam had not seen the full text of the bill before it was passed.

The new law criminalises any act of:

The new law's key provisions are as follows:

How will it affect Hong Kong?

According to the 1997 agreement between China and Britain, Hong Kong is supposed to remain under ‘one country, two systems’ until 2047. The agreement secured some democratic freedoms for the Hong Kongers that are not available to the mainland Chinese under the communist rule.

Critics argue that the new laws mean that the autonomy of Hong Kong is effectively over.

Hong Kong is currently the only common law jurisdiction in China. There are fears that with the new law, its judicial independence will be over and its judicial system will become same as mainland China's.

"Effectively, they are imposing the People's Republic of China's criminal system onto the Hong Kong common law system, leaving them with complete discretion to decide who should fall into which system,” Professor Johannes Chan, a legal scholar at the University of Hong Kong was quoted as saying by BBC.

He added that the law will have a severe impact on freedom of expression, if not personal security, on the people of Hong Kong.

The pro-democracy activists like Joshua Wong who have been lobbying foreign governments to help their cause can now be charged under the new law. Reportedly, Wong has now quit his Demosisto party.

Also read: As China Seeks Support On Hong Kong, India Has The Opportunity To Revive Relations On New Terms