Explained: Keeladi Excavations In Tamil Nadu And Why Racist And Secessionist Forces Are Eyeing It 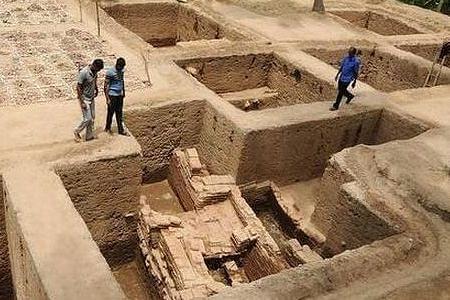 A small village near Silaiman on the border between Madurai and Sivagangai districts in Tamil Nadu has been grabbing eyeballs.

The skeleton was 75 cm in height and was found 0.5 m buried below surface level between two terracotta urns.

Deputy Director of Archaeology and in-charge of the excavations R. Sivanandam said the gender of the skeletal remains will be determined in two days time, reported The Hindu.

Reportedly, two other skeletal remains of adults were found at Konthagai during this phase. A total of 15 urns have been found till date.

Tamil Nadu Archaeological Department (TNAD) have found a gold coin during the excavation at Agaram dated to 17th century AD.

Some shells and pots, have also been found during the excavation, in all four sites.

Why is Keeladi in the limelight?

In September last year, Tamil Nadu Archaeology Department (TNAD) stated that the artefacts unearthed during Keeladi excavations could be safely dated to a period between 6th century BCE and 1st century CE, about 300 years earlier than previously assigned time of 3rd century BCE.

“The results suggest that the urbanisation of Vaigai plains happened in Tamil Nadu around 6th century BCE, same time as the Gangetic plains,” said Commissioner of Archaeology T Udayachandran.

The report was based on the fourth phase excavation that was done from 2017 to 2018 and had brought out 5820 artefacts.

Over 50 potsherds were recovered from the site with Tamil Brahmi script, which shows that the inhabitants had attained literacy or learned the art of writing as early as 6th century BCE.

Among other Keeladi findings were bones of different animals- cow/ox, buffalo, sheep, goat, nilgai, blackbuck, wild boar and peacock. “This finding suggests that the society in Keeladi had used animals predominantly for agricultural purposes,” Udayachandran was quoted as saying by The Hindu.

The report also talked about existence of weaving industry at various levels of development at the time and described “well-laid floors made of fine clay”, “roof tiles” with “grooves” to “drain water”, joints fastened with “iron nails”, etc, along with 110 dies made of ivory.

The mineral analysis of the pottery specimens showed that the water containers and cooking vessels were shaped out of locally available raw materials.

The report also hinted at script continuity from Indus Valley Civilisation. The 580-BCE inscription contains graffiti marks which are believed to be the link between the Indus script and the Tamil Brahmi.

The Keeladi site, since its discovery has been shrouded in controversies with several Dravidian and Left ideologues claiming that the archaeological finds prove that the Indus Valley Civilisation was a “Dravidian” culture and an independent “secular” Tamil civilisation.

The attempt to define the finds in narrow and racial terms is ideologically motivated to one, pump up Tamil exclusivist sentiments, and two, challenge the view that sees India as one — unity in diversity.

The thing is that we don’t need to turn to history to appreciate the diversity that is a part of the Indian ethos. Unlike many other countries where diversity was rooted out with brutal violence, India continues to be diverse in cultural, linguistic and ethnic terms.

Many different cultures have dotted the landscape of this country from north to south and east to west, and they all have contributed to the current Indian identity. To define a culture in narrow racial terms, which didn’t define itself so, is cheap politicking.

The Sanatana civilisation of this country is like the mighty range of Himalayas from which the rivers of different cultures with different origin-points and trajectories flow, and we all bathe in them — separated spatially and temporally — but united eternally.