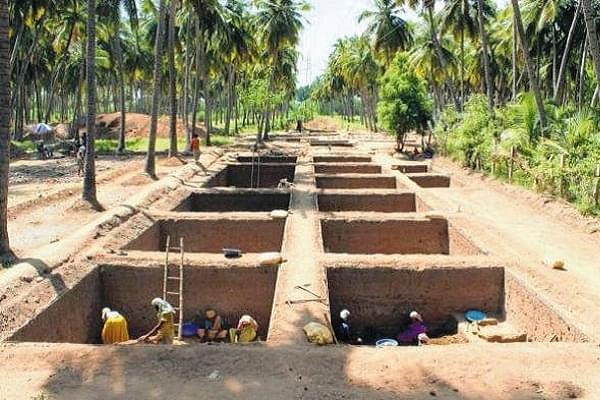 Keeladi is a small village near Silaiman on the border between Madurai and Sivagangai districts in Tamil Nadu, and also the site on the banks on Vaigai river where remains ancient Sangam culture have been found.

The Tamil Nadu Archaeology Department (TNAD) recently stated that the artefacts unearthed during Keeladi excavations could be safely dated to a period between 6th century BCE and 1st century CE, about 300 years earlier than previously assigned time of 3rd century BCE.

“The results suggest that the urbanisation of Vaigai plains happened in Tamil Nadu around 6th century BCE, same time as the Gangetic plains,” said Commissioner of Archaeology T Udayachandran.

‘Keeladi-An Urban Settlement of Sangam Age on the Banks of River Vaigai’, the report published by the TNAD states that the “second urbanisation [the first being Indus] of Vaigai plains happened in Tamil Nadu around 6th century BCE as it happened in Gangetic plains.”

The report is based on the fourth phase excavation that was done from 2017 to 2018 and had brought out 5820 artefacts. The TNAD is currently carrying out the 5th phase of excavation that had started from June 2019.

Over 50 potsherds we recovered from the site with Tamil Brahmi script, which shows that the the inhabitants had attained literacy or learned the art of writing as early as 6th century BCE.

Such inscriptions, one of which goes back to 580 BCE dents the settled consensus on the origin of Tamil Brahmi script, the precursor of modern Tamil (Tamil Brahmi is different from Prakrit Brahmi).

Most accepted theory in this regard claims that the Brahmi script reached Tamil Nadu due the southern spread of Jainism and Buddhism from North India, and was adapted to suit the Tamil phonetic system.

This theory assumes that Brahmi originated within the imperial courts of Mauryan kingdom or evolved from a more ancient foreign script and dispersed to South India and Sri Lanka after the 3rd century BCE, especially due to Ashoka’s missionary activity.

Another counterclaim to the above theory was put forward by Rajan and Yatheeskumar in 2013 who published their research findings on excavations at Porunthal and Kodumanal where numerous both Tamil-Brahmi and Prakrit-Brahmi inscriptions and fragments were found.

Among other Keeladi findings were bones of different animals- cow/ox, buffalo, sheep, goat, nilgai, blackbuck, wild boar and peacock. “This finding suggests that the society in Keeladi had used animals predominantly for agricultural purposes,” Udayachandran was quoted as saying by The Hindu.

The report also talked about existence of weaving industry at various levels of development at the time.

The report describes “well-laid floors made of fine clay”, “roof tiles” with “grooves” to “drain water”, joints fastened with “iron nails”, etc, along with 110 dies made of ivory.

The mineral analysis of the pottery specimens showed that the water containers and cooking vessels were shaped out of locally available raw materials.

The report also hints at script continuity from Indus Valley Civilisation. The 580-BCE inscription contains graffiti marks which are believed to be the link between the Indus script and the Tamil Brahmi.

“Among the available scripts of India, the Indus scripts are considered to be the earliest one and were 4500 years old. One kind of script that survived between the disappearance of Indus script and the emergence of Brahmi script is called as graffiti marks by the scholars,” reads the report. Around 1000 such signs are found.

The Keeladi site, since its discovery has been shrouded in controversies with several Dravidian and Left ideologues claiming that the archaeological finds prove that the Indus Valley Civilisation was a Dravidian culture and an independent “secular” Tamil civilisation.