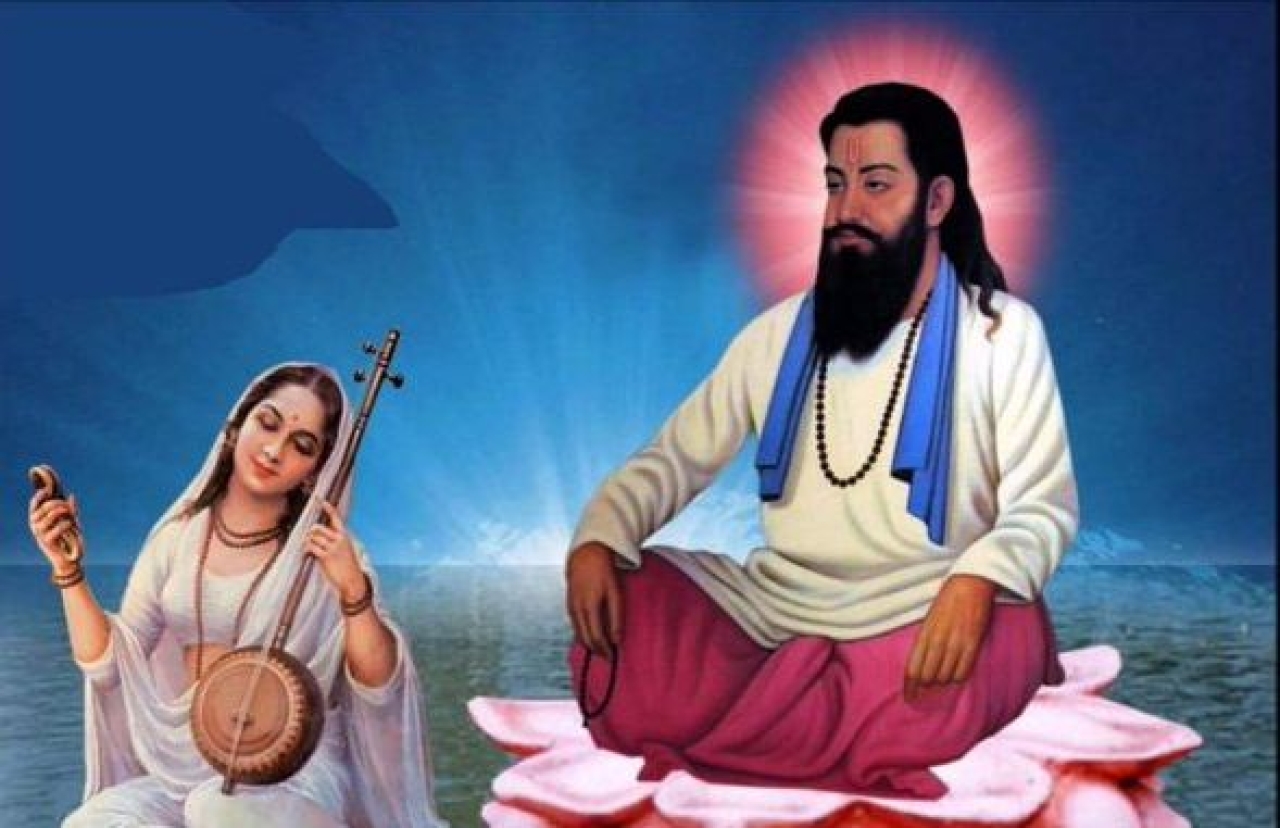 Sant Ravidas was born in untouchable caste, his Guru Ramananda was a Brahmin, while his disciple Meerabai was a Rajput princess (pic via Twitter)

On 21 August, Tughlaqabad area of Delhi bristled with protesters from Punjab, Haryana, Delhi, Rajasthan, Uttar Pradesh and elsewhere who demanded that the recenly demolished temple of Sant Ravidas be rebuild.

The protest turned violent and several were injured including both protesters and police officers. The Police resorted to lathicharge, fired teargas shells and used "mild force" to disperse the mob. The locals claimed that had the police not used force, the situation could have worsened.

The 16th century stalwart of the Bhakti movement, Sant Ravidas was born in a family of leather-workers, then considered as untouchables. He was one of the disciples of the Bhakti saint-poet Ramananda.

Many of his teachings were also included in the Guru Granth Sahib, and his followers, predominantly Dalits, are spread across Punjab, Haryana, parts of Rajasthan, Delhi, Uttar Pradesh and Bihar.

The 33-year-old dispute pertains to the ownership of the land where the temple was situated.

While DDA argued that it was essentially a government land that was encroached upon by the Samiti, the latter argued that the land was "occupied" by Roopanand, one of their ancestors nearly 160 years ago.

The Samiti formed in 1959 argued that it built at the site, a Guru Ravidas temple, an ashram and samadhi of Roopanand and other saints, along with four other rooms as part of a Dharamshala. The Samiti told the court that the temple was inaugurated in March of same year by then Union minister and prominent politician Jagjivan Ram.

On the other hand, DDA submitted that under the Delhi Land Reforms Act of 1954, the land was shown as 'shamlat' (village common land), which belongs to the local Gram Sabha. It further said the land in question was "acquired" in 1963 under the Land Acquisition Act and due compensation was paid.

DDA also argued that the constructions were made on "green land" (protected forest area) and are hence illegal.

The Samiti admitted in the court that the land was formally taken over by the central government, but they argued that it was "only a book entry".

The matter reached court in 1986 when the samiti filed a writ petition against DDA and the high court passed a status quo order on any further construction.

After DDA’s demolition drive in 1992, the Samiti again moved court and a long legal battle followed, culminating in the 8 April verdict of the Supreme Court in favour of the DDA.

The apex court in its April ruling said that the area shall be vacated within two months. "In case it is not vacated within the stipulated time, it will be treated as violation of the order passed by this court," said the Supreme Court. On 10 August, the Delhi Development Authority (DDA) demolished the temple.

The Historical Question And Politics

In the aftermath of the demolition, several media outlets published that the temple was built on a land grant by Delhi Sultan Sikandar Lodi. Therefore, the allegations were made, that the demotion was an attack on a symbol of Hindu-Muslim unity, and more specifically, Dalit-Muslim unity.

Peter Friedlander, one of the foremost researchers of the Ravidasi sect, says that the encounter between Sikandar Lodi and saint Ravidas is mentioned in Ravidas Ramayana, first written down about 1900 CE, but based on older oral traditions. The story goes like this:

A Sufi, Sadna Pir complained against Sant Ravidas to the Delhi Sultan Sikandar Lodhi that a Hindu born in low caste in Varanasi, when approached and engaged by him, said that the Vedas and Puranas were old and eternal while Quran and Islam were new.

The Pir exhorted Lodi that if such insult of Islam was allowed to continue then Islam would soon be wiped out.

The Sultan got angry when he heard this, and said that while Islam was at its pinnacle who would be the fool to try and destroy the religion. He subsequently sent for Sant Ravidas.

When Ravidas arrived in his court, Lodi ridiculed and abused Hinduism, calling it a confusing path of deviants, and the trickery of the Kafir Hindus. The Sultan further said that Vedic dharma was like a disease that only causes misery. It is not a religion, but madness, filled with imagination and far from the truth.

“Only Islam leads to heaven. Those who refuse Islam burn in the hell-fire,” said the Sultan, and asked the saint to convert. The Sultan further stated that if Ravidas leaves the Vaidik Dharma, and embraces Islam, he will be given the post of a ‘Maulana’, he will become famous, and everyone will fear him.

Rejecting the offer of the Sultan, the saint countered his comments against Hinduism. He explained the precepts of the Vaidik Dharma, and boldly stated that he would rather die than leave his Dharma.

When the saint rejected the bribes and threats of the Sultan, Sikandar Lodi imprisoned him and started torturing him.

The Ravidas Ramayana further notes that seeing the plight of the saint, Lord Sri Krishna himself gave him Darshan, and Ravidas harnessed his powers and miraculously escaped from prison. The Sultan, realising the superiority of the saint’s spiritual merit over his power as a king, gives up.

The protesters fighting for the Tughlaqabad temple say that saint Ravidas was jailed on the very grounds where the demolished temple stood, and that the Sultan became a disciple of Ravidas, and gifted the land for him. However, this is not mentioned in the century-old text Ravidas Ramayana or any other records.

Some argue that the saint was tortured to death while in Lodi’s captivity and the account of his miraculous escape was invented in later hagiographies. Others have argued that the saint attained nirvana in Chittor, or his birthplace, Varanasi.

Nonetheless, the argument that the land was donated by Sikandar Lodi is not based on any concrete evidence.

Saint Ravidas was one of the stalwarts of medieval age Bhakti movement in north India. Initiated by his Guru Ramananda, the saint provided a healing touch to the people humiliated, attacked and threatened by the invaders, and had a huge impact on the spiritual landscape of the country,

The Guru of famous Mirabai, Sant Ravidas not only refuted the worldly distinctions and discrimination based on caste, gender etc. but also revived the eternal principle of ancient Indian philosophy - that such ephemeral identities don’t matter when it comes to salvation.

Like the atman is separate from the physical attributes of the body - skin colour, height, weight; and independent of worldly roles we take - of father, mother, husband, son etc, said saint Ravidas, it is also separate from the identities of the world - of caste, gender etc, and this atman in everyone, is a reflection of the Paramatma.

Sant Ravidas also opposed the external and outwardly religious practices, unaccompanied by true devotion. He says that some put a tilak on their forehead, take the rosary in hand to fool the others. These people have strayed from the right path. According to Ravidas, one can never reach Ram without true devotion:

What Ravidas says above is remarkably similar to what Sankaracharya said centuries ago:

There are many who go with matted locks, many who have clean shaven heads, many whose hairs have been plucked out; some are clothed in orange, yet others in various colours - all just for a livelihood. Seeing truth revealed before them, still the foolish ones see it not.

The saint put emphasis on simple spiritual practice of naam-japa (chanting the name), along with right conduct to reach the Hari.

My tongue is engaged in taking the name of Hari, while my hands are engaged in work. This way, I am at peace, free of any troubles, as Lord Ram himself takes care of me, says Ravidas. The saint describes the bliss of repeating the name of Ram in beautiful words:

You can also read a detailed take on this issue by history blogger True Indology here.