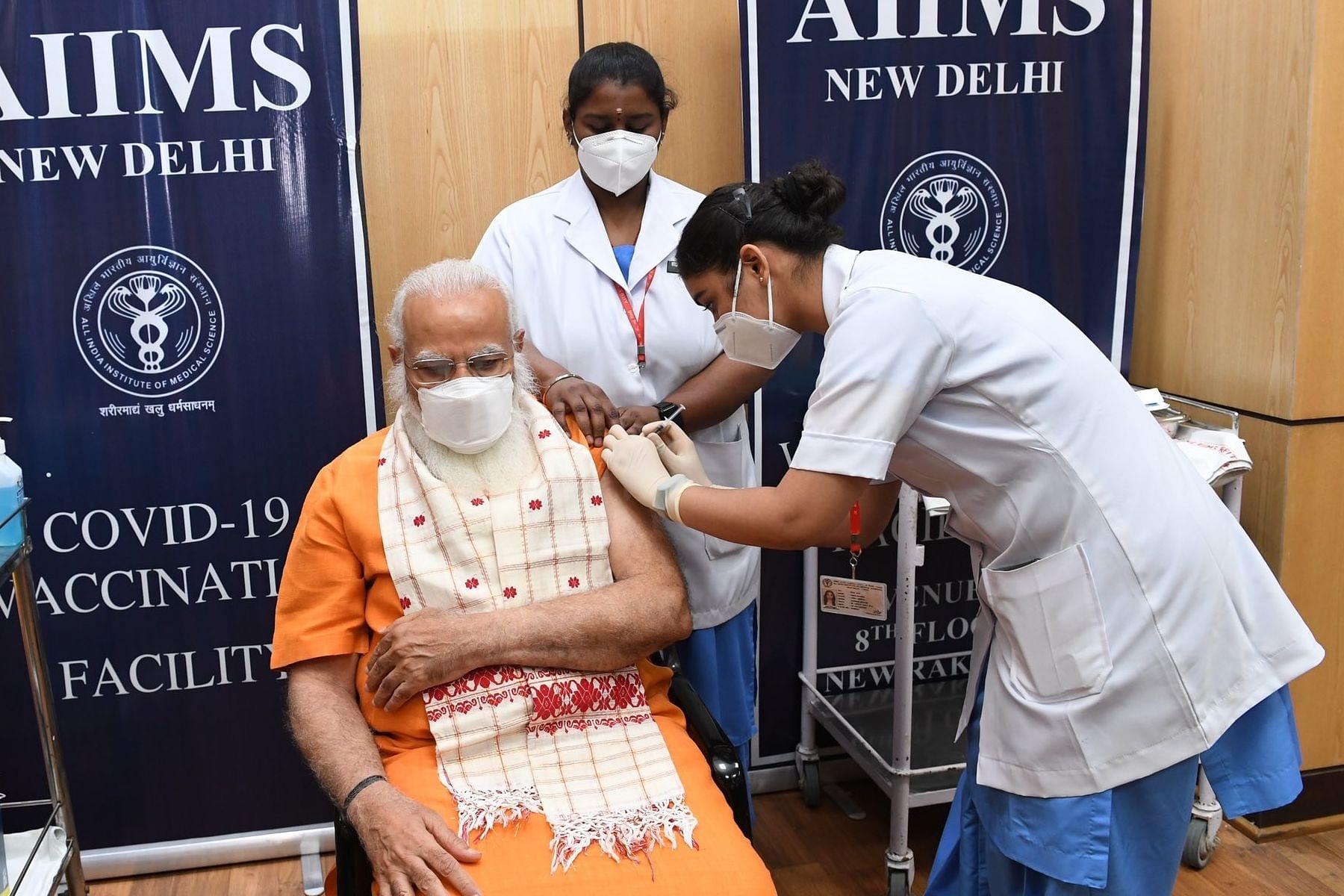 Amidst surging cases as part of the second wave of COVID-19 pandemic, the Supreme Court of India is questioning the Government of India over the measures to contain the pandemic, including critical supplies and vaccination.

The bench comprising Justices D Y Chandrachud, Nageswara Rao and S Ravindra Bhat has been hearing the suo moto case taken in relation to COVID-19 issues (In Re Distribution of Essential Supplies and Services during Pandemic), reports Live Law.

During the 30 April hearing, Justice Chandrachud said, “we are looking at playing a dialogical role through judicial review so that the thought process is initiated by policy makers.”

Currently, the central government is acquiring vaccines from manufacturers which it will provide to the states for free to vaccinate persons aged above 45 as well as the frontline workers.

The states will have to acquire vaccines from the manufacturers themselves to vaccinate the rest of their population (persons aged between 18 and 45), which they can provide for free or at a price (Under the Schedule 7 of Indian Constitution, health is primarily a State subject, that is, states governments are primarily responsible for public health).

This means, theoretically, people in different states will have different availability, affordability etc. of the vaccine depending upon the respective state government policy. However, 21 states have already declared free vaccination for all, including Delhi, Maharashtra, Karnataka, Haryana, Odisha, Jharkhand, West Bengal, Assam, Gujarat, Telangana, Tamil Nadu, Kerala, Madhya Pradesh. The rest are expected to provide it at a very low price.

The central government would purchase only 50 per cent of Serum Institute of India's Covishield and Bharat Biotech's Covaxin, and the manufacturers can sell the balance 50 per cent directly to states and private entities at higher prices.

Already, more than 14.19 crore COVID-19 vaccine doses have been administered in the country to people above the age of 45, and health care and frontline workers, as part of the world's largest vaccination drive, which completed 100 days on 25 April.

Apart from centre and state governments, private hospitals can also acquire vaccines from manufacturers and provide them for a price.

Issues have also been raised against the differential pricing of the vaccine. The SII is reportedly providing the COVISHIELD vaccine at a price of Rs 150 per dose to the Centre (for the first 100 million doses), Rs 300 per dose to the state governments, and Rs 600 for private hospitals, while Bharat Biotech set the prices at Rs 600 and Rs 1,200 a dose.

SII’s Adar Poonawala has previously said that it was providing the vaccine at Rs 150 while the average price is around $20 (Rs 1,500).

“..because of the Modi government's request, we are providing at subsidised rates... It is not that we're not making profits... but we are not making super profits, which is key to re-investing," he told NDTV earlier in April.

The second phase of India's vaccination drive began from 1 May to vaccinate all adults above 18. However, the state governments are struggling with the shortage of vaccines. Poonawala had also said in an interview that he was getting threatening phone calls for vaccine from very powerful people, including chief ministers of states.

In the 30 April hearing, the bench with its questions made it very clear that it disapproved of the current situation regarding the COVID-19 vaccination.

It said that the vaccine constituted a “public good” since the vaccine manufacturing is publicly funded, hinting that it was uncomfortable with the idea of manufacturers profiting from the vaccine sales.

The bench further asked if the government has considered using the powers under Section 92 of Patents Act for compulsory licensing of the COVID vaccines.

Compulsory licensing would allow the patent rights of the vaccine manufacturers be circumvented in order to supply the vaccine in large quantities at a cheaper price or for free.

The bench also seemed to disagree with the policy where States buy vaccines for their populations at a higher price, while the Centre provides it for free to frontline and health workers and persons above 45.

Supreme Court asked how will Centre ensure equity by private vaccine manufacturers when it is buying only 50 per cent of the doses.

The bench asked the Central Government why it is not buying 100 percentage of COVID vaccine doses as it can then distribute the vaccine more equitably among the states.

“Why cannot the Centre follow the national immunisation program policy with respect to COVID vaccines? Will one state get priority access over another in getting the vaccines?” the SC asked.

The court also observed that Bangladesh had developed a generic drug for Remdesivir and is exporting the same to other countries and that Jharkhand has proposed to import from Bangladesh.

“Has the centre considered to invoking section 92 of patents act and issue compulsory licenses so that drugs can be manufactured while royalty is sorted?”, the bench asked.

The Supreme Court even asked Centre why it should not issue directions under Section 100 and Section 92 of Patents Act to enable generics to manufacture COVID-19 drugs without the fear of legal action?

"Is the logistical concern more important than right to health", SC asks.

Justice Chandrachud also asked how the Centre will ensure registration for vaccines for illiterate people considering the fact that COWIN app registration is mandatory.

The Centre informed the court that during consultations with the States, the latter had urged the centre that vaccination be expanded beyond the priority groups (health workers, frontline workers, age 45 and above) as identified by NEGVAC.

It further stated that it was in the spirit of cooperative federalism that the Centre deemed it necessary to allow decentralised vaccine procurement, and States playing a bigger role in expanding the vaccination beyond the priority groups. This way the union government could focus on the priority groups while states could take care of the rest.

“Since the priority group as identified by Union government (which had more vulnerability) was not fully vaccinated, it was considered imperative to carry out two drives separately i.e. in a decentralized manner to achieve higher efficiency and reach,” the government said.

The government also reiterated that the 50 percent of the vaccines procured through the union government channel would continue to be provided free of cost to the most vulnerable age groups of 45 years plus, health care workers and frontline workers.

The centre also clarified that it had kept in mind the issues of equity in its scheme.

It stated that while the States are free to procure vaccine for 18-44 years population, they have been allocated the available vaccine quantity in proportion to the population between 18-44 years of age of the respective state so as to ensure equitable distribution of vaccine.

The union government further clarified that alongside taking care of the short-term needs of the vaccination, the government had also kept in mind incentivizing the vaccine researchers and manufacturers.

“The liberty to decide prices on arm’s length basis by and between the State Government and hospitals is based on the concept of creating an incentivized demand for the private vaccine manufacturers in order to instill a competitive market resulting in increased production of vaccines and market driven affordable prices for the same.”

The government further stated that it was providing advance payments, facilitating more production sites etc. to manufacturers to significantly augment vaccine production capacities, its prime priority at this juncture.

“It would make pricing, procurement and administration of vaccines more flexible and competitive and would further ensure augmented vaccine production as well as wider availability of vaccines in the country,” it said.

In its 64-page order dated 30 April but published yesterday (2 May), the Supreme Court said that COVID-19 vaccinations being provided to citizens constitute a valuable public good, and there should be no discrimination in the process, reports The Hindu.

“Discrimination cannot be made between different classes of citizens who are similarly circumstanced on the ground that while the Central government will carry the burden of providing free vaccines for the 45 years and above population, the State governments will discharge the responsibility of the 18 to 44 age group on such commercial terms as they may negotiate,” the court noted.

“Prima facie, the rational method of proceeding in a manner consistent with the right to life (which includes the right to health) under Article 21 would be for the Central government to procure all vaccines and to negotiate the price with vaccine manufacturers. Once quantities are allocated by it to each State government, the latter would lift the allocated quantities and carry out the distribution,” the court directed.