Facts Vs Rahul Gandhi’s Claims: Everything The Gandhi Scion Got Wrong On The Rafale Deal 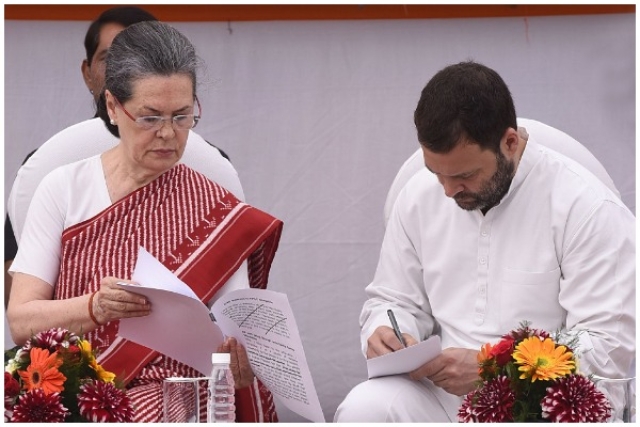 Rafale fighter jets have been inducted into the Indian Air Force, but the Congress is yet to end its tirade against the deal. With Congress leader Rahul Gandhi raising the issue again during the Maharashtra election campaign, the party is unlikely to give up on it even after the Supreme Court’s dismissal of the review petition filed in the case.

A bench of the apex court, headed by Chief Justice Ranjan Gogoi, today (14 November) dismissed the petition filed against its judgement in the Rafale case by former union ministers Yashwant Sinha and Arun Shourie and activist lawyer Prashant Bhushan.

Here’s what the Congress leader got wrong on the Rafale deal:

1) Why did the Narendra Modi government buy 36 Rafale jets instead of 126?

By the time Modi came to power, the negotiations with Dassault for the procurement of Rafale had stalled due to disagreements between the company and Hindustan Aeronautics Limited (HAL) over the production of the aircraft in India. The Indian Air Force (IAF), on the other hand, had only around 33 squadrons against the sanctioned strength of 42, which it needs to deal with a two-front threat. The number is now down to 31. Therefore, the IAF needed fighters urgently to plug the gaps developing in its capability due to depleting numbers. Negotiating a deal which involved transfer of technology and production of the aircraft in India would have taken considerably long time.

Moreover, if such a deal was negotiated, the HAL would have been required to develop the infrastructure needed for producing the aircraft in India. This too would have taken some time, delaying the procurement further.

Hence, the government decided to go ahead with 36.

The fact that the IAF has already kick-started the process to procure additional aircraft, most of which will be built in India, gives credence to the government’s claim that buying 36 Rafale jets was an emergency measure.

2) Why is HAL not part of the Rafale deal?

One, as the deal had no ‘Make in India’ clause, the HAL was not made part of the deal. The government decided to buy the fighters off the shelf because manufacturing small number of fighters would not have been economical.

Two, while HAL is not part of the deal, it remains Dassault’s partner for execution of the offset clause along with Reliance and other private and state-owned firms.

Three, as Livefist has reported, the IAF officer who was leading negotiations with Dassault during the United Progressive Alliance (UPA) rule has said that the deal got stuck due to ‘irresolvable’ differences between HAL and Dassault.

3) Did government impose Ambani’s Reliance on Dassault? If not, did French outlet Mediapart lie about the deputy CEO’s statement?

While experts had cast doubts about the accuracy of the outlet’s report soon after it was published, the allegations against Mediapart of misreporting and misquoting the documents have gained ground with the emergence of another ‘internal document’ in a report by Yves Pagot in Portail Aviation. The document put out by Portail Aviation talks about "Make in India" being "the inevitable consequence" of the deal and says the "Joint Venture with Reliance was created to attain this objective".

It should be noted that under the offset policy, put in place by the Congress-led UPA government, foreign equipment manufacturers are required to invest a part of the contract value in India. As part of the Rafale deal, Dassault has agreed to execute offsets worth 50 per cent of the total value of the deal. It is under the offset clause of the deal that Dassault has chosen Reliance, along with multiple other private and state-owned firms, to be its partners in India.

4) Is Anil Ambani’s Reliance the biggest beneficiary of the offsets?

The offsets under the Rafale deal are divided between four firms: Dassault, which will build the air frame and integrate the aircraft with equipment from various other firms; Thales which will build the radars and avionics; Safran which will manufacture the engines and electronics; and MBDA, responsible for the weapons.

As the deal was worth nearly Rs 60,000 crore, offsets work out to be around Rs 30,000 crore (50 per cent). Of this, Dassault is responsible for the execution of offsets worth Rs 6,500 crore, according to Air Marshal R Nambiar, who was heading the negotiations with Dassault for the Rafale fighters during the UPA era.

A report in the Economic Times estimates that Reliance would get around 3 per cent of the offsets worth Rs 30,000 crore. Dassault Reliance joint venture will see an investment of about Rs 845 crore (€100 million). The venture will reportedly manufacture parts of the Dassault’s Falcon jet. A small amount would also be invested by Thales, which will set up an assembly line to manufacture avionics and radar.

Therefore, Reliance is getting a small part of the pie.

State-owned firms like the Defence Research and Development Organisation (DRDO) and HAL will also get investments. Reports say that engine and electronics maker Safran will invest in both the firms. While DRDO may get funding to revive the Kaveri jet engine programme, HAL is likely to enter into a joint venture with the company to manufacture helicopter engines. Another state-owned firm, Bharat Electronics Limited, is likely to get a part of the pie from Thales.

These facts undermine the Congress leader Rahul Gandhi’s claims that the Rafale deal was negotiated to benefit Ambani’s Reliance.

Moreover, the deal India has signed includes not only maintenance support, weapons and training, but also India-specific enhancements to the fighters. These modifications, which the IAF demanded, add to the cost of the fighter. And even though the Rafales sold to Qatar and Egypt do not have most of these modifications, they cost as much as the modified ones for India.

The deal also has a clause for 50 per cent offset. This means, 50 per cent of what Dassault earns (50 per cent of the Rs 59,000 crore) from the deal will be invested back in India, giving a boost to local defence manufacturing.

Congress’ claim of the government buying Rafale jets at an unjustified price also falls flat because the party continues to quote the price of the bare aircraft offered in late 2000s and refuses to take into account the inflation and the in-built cost escalation, which former finance minister late Arun Jaitley had explained.

6) Gandhi’s Claim: ‘Defence Ministry officials’ objected to the ‘new price’ of the fighter.

Fact: according to The Indian Express, an official of the Defence Ministry, who was at one point a member of the Contract Negotiations Committee, had put on record his objection to the new benchmark price, not the final price of the Rafale aircraft which Rahul Gandhi was referring to. But there’s more.

One, according to the same report, the objections were overruled by another senior official of the Ministry of Defence.

And two, according to the Daily Mail, two senior officials had questioned the deal during the UPA's rule. The report, which appeared in the daily in February 2012, says that “two officials of the defence ministry have questioned the methods adopted by the contract negotiation committee which concluded that Rafale was the lowest bidder”.

7) Rahul Gandhi’s claim: French president Emmanuel Macron told him and former prime minister Manmohan Singh that he does not have any objection to Modi government disclosing the pricing details of the fighter jet deal.

Fact: Rahul Gandhi, along with Singh, had met Macron in March 2018 during the latter’s visit to India. But soon after Gandhi claimed that Macron told him the price could be revealed, French authorities issued a statement saying that the agreement signed with India “legally binds the two States to protect the classified information provided by the partner”.

Moreover, statements made by the French president on the Rafale deal during his visit to India contradicts Gandhi’s claim. In an interview, Macron said, “the deal is very sensitive. We can't reveal details because of business reasons.”

But wait, none of this is likely to stop the Congress from making these claims again.