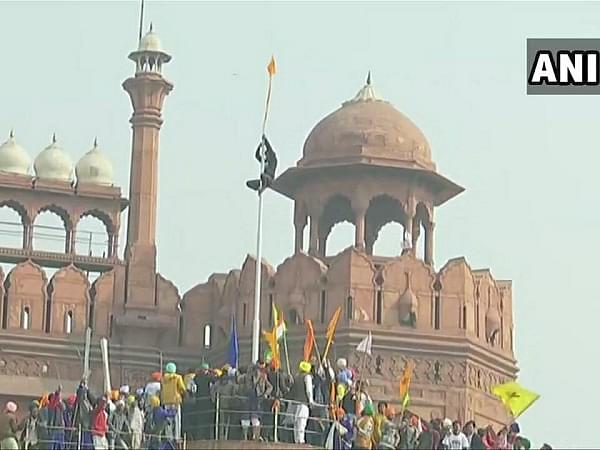 Father of Jugraj Singh, who is wanted by the police for hoisting Nishan Sahib at the Red Fort on Republic Day, was honoured at an event held inside the premises of the Golden Temple.

The event was organised in the memory of Navreet Singh, who died during the tractor march on 26 January.

Jugraj, who is 23-year-old and hails from Wan Tara Singh in Punjab, is believed to have hoisted the Nishan Sahib on the Red Fort on Republic Day amid the violence in the farmers' tractor rally in the national capital.

BKU (Krantikari) president Surjit Singh Phul, who is a member of the Sanyukt Kissan Morcha (SKM), and Shiromani Gurdwara Parbandhak Committee (SGPC) chief secretary Harjinder Singh Dhami were present when the family of Jugraj Singh and others were honoured, reports The Indian Express.

“Function was held in memory of Navreet Singh, who died with police bullets during a tractor march in Delhi on 26 January. The ardaas and shardanjali samagam was organised by Sikh Youth of Punjab to pay homage to all farmers who lost their lives while participating in the agitation,” said Paramjit Singh Mand of the Sikh Youth of Punjab.

“We vow that sacrifices and loss of lives of farmers during kisan andolan won’t be allowed to go in vain. We prayed for the success of the agitation and reiterated that till the repeal of three black farm laws the struggle will continue despite egotistical behaviour and repressive measures of the Union government,” a press note release after the event said.

Appealing the shopkeepers and traders to shut business establishments to show solidarity with farmer protests, the gathering announced its support to Bharat Bandh call given by SKM for 26 March.