Farmer Rally Violence: Deep Sidhu Missing After Being Named In FIR; Supporters Say He Is Being Scapegoated By Unions 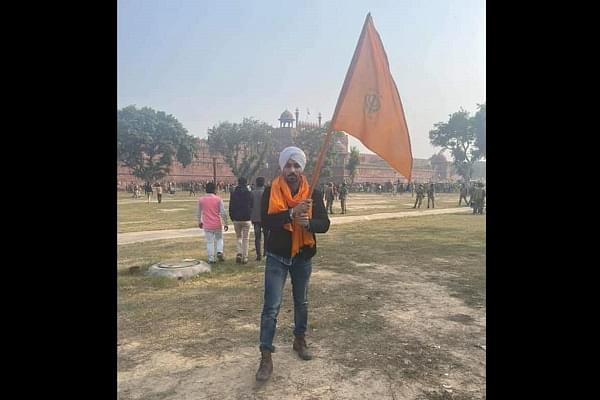 Punjabi actor-turned-farmer activist Deep Sidhu has gone into hiding as pressure builds on him for stirring violence in the farmer tractor rally on Republic Day in New Delhi, Times of India reports.

He was seen escaping by jumping on a motorcycle as vehicles chased him in one of the recently released videos. Sidhu has been at the receiving end of a barrage of accusations from the Sanyukt Kisan Morcha (SKM) officials for causing the mayhem at Red Fort and ITO on 26 January.

The SKM functionaries now claim that that the actor is an “agent of the RSS” and he was last seen in the public eye on Tuesday.

The Bharatiya Kisan Union national spokesman Rakesh Tikait said that Sidhu was “not a Sikh” and a “BJP worker”. Later, he video emerged of him asking the farmers to be armed with “lathi-danda” during the rally to protect their lands which would otherwise be taken away. He has also been named in the Delhi Police FIR.

Sidhu had first kicked off this agitation by leading a protest at the Shambhu barrier in the Punjab-Haryana border at Patiala.

“We have only hoisted the Nishan Sahib flag on the Red Fort while exercising our democratic right to protest,” he was heard saying in a Facebook Live after the mayhem caused by protestors at Lal Quila.

Sidhu’s supporters say that he is being made an scapegoat by the media and the farmers’ unions who are themselves flawed.

The gulf between Sidhu and the unions widened after a Facebook Live on 10 December in which he accused the ‘communist unions’ of working their own agenda to further Left politics.

In fact, Sidhu had warned that communist organisations wanted “a clash” so that they could “build their politics”.

“Political diplomacy has been abandoned... Some communist organisations want a clash so that they can build their politics, which is not desirable at all. Such clashes would be much more dangerous,” he had said.

He had further criticised the zero sum game approach adopted by farmers’ unions. he had asked farmers to move away from “yes and no” approach. The path of political diplomacy shouldn’t be blocked, he had said.

“Discipline should be maintained. We don’t want any politics.. and we need to avoid. . any damage.. our victory should not be defined by ‘repeal or bullets’.. remain in discipline. Don’t do anything wrong under provocation..” he had said.

However, after being trolled for trying to take the “middle path”, and accused of weakening the stir, Sidhu backtracked and apologised the next day.

Names of Punjabi actor Deep Sidhu and gangster Lakka Sadana have also been included in an FIR registered in connection with the violence at Red Fort in Delhi on Jan 26. Sidhu was involved in the incident: Delhi Police

Meanwhile, ANI reported that Delhi Police has named Deep Sidhu and gangster Lakka Sadana in an FIR concerning the violence on Republic Day.

As per Zee News, the case has been registered at the Kotwali police station of North district under Indian Penal Code (IPC) sections like 353 (assault or criminal force to deter public servant from discharge of his duty), 308 (attempt to commit culpable homicide), 307 (attempt to murder) amongst others.