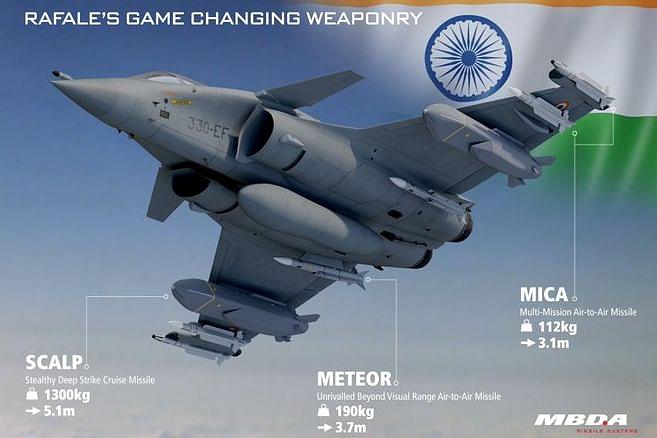 The first batch of Rafales for the Indian Air Force (IAF) consisting of at least five fighter jets will reach India early next week from France.

The fighters will be flown to India by IAF pilots who have undergone extensive training on the platform in France, and the flight home will be aided by an Airbus A330 multi-role tanker transport aircraft of the French Air Force.

In an unusual move, probably because India is currently locked in the most serious standoff with China in decades, the IAF has announced that its Rafale crew is “fully operational”.

“Post arrival, efforts will focus on operationalisation of the aircraft [Rafale] at the earliest,” the IAF had said in a statement issued earlier this month amid tensions with China.

The weapons that the Rafales will use have already started arriving at Ambala, the airbase where the first squadron of the fighter — Number 17 Squadron 'Golden Arrows' — will be based.

Here are four weapons the Rafale fighters will use:

Designed and developed by France-based MBDA Systems, SCALP is a long-range deep-strike air-to-ground cruise missile. With a range of over 560 kilometres, the missile can be fired from stand-off ranges, without the safety of the Indian airspace in many cases.

The missile’s low observability, due to its design and other features, adds to its lethality. After launch, “the weapon descends to terrain hugging altitude to avoid detection”.

“On approaching the target, its onboard infrared seeker matches the target image with the stored picture to ensure a precision strike and minimal collateral damage,” maker MBDA says.

French Air Force Rafales used the missile widely during its interventions in Libya and Syria. It has also been used by fighters of the Royal Air Force and the Italian Air Force in Libya.

Instead of a traditional rocket motor, the Meteor uses a solid fuel, variable flow, ducted rocket— called ramjet – for propulsion. As a result, this missile can throttle its engine during different phases of flight.

“This ‘ramjet’ motor provides the missile with thrust all the way to target intercept, providing the largest no-escape zone of any air-to-air missile,” MBDA says.

The missile can get mid-course correction, re-targeting and guidance updates not only from the fighter jet it has been fired from but also from ‘third party’ sources such as other fighters in the formation.

“The weapon is also equipped with data-link communication. Aimed at meeting the needs of a network centric environment, Meteor can be operated using third-party data, enabling the Meteor user — the pilot — to have the most flexible weapon system,” the maker of the missile says.

The missile is also equipped with an active X-band radar seeker to help it lock on to targets during the terminal phase of its flight.

HAMMER is a precision-guided air-to-ground munition designed and manufactured by Sagem.

HAMMER, its maker says, consists of a guidance kit and a range extension kit “fitted on a standard bomb body of the Mk80 series or the likes”.

It can be used both for close air support missions and ground attack missions, and comes in with an extended stand-off capacity.

“…stand-off means more than range: it offers an unmatched firing envelope, from high to very low altitude, with a wide off-boresight capability to fit the most demanding tactical situations,” Safran says.

Its “automatic target recognition” technology helps it hit enemy ground installation with accuracy. High resistance to jamming and target location error gives it an advantage over other such weapons.

Its flexibility is another advantage that differentiates it.

“The AASM “Hammer” is also fully flexible to optimise the desired military effect on the target. In addition to the use of a dedicated warhead and an airburst capacity, the angle of impact can be set up till a fully vertical dive,” its maker says.

MICA is a air-to-air missile capable of both beyond visual range and short range combat.

The third MBDA-built weapon in this list, the in-coming Rafales will share this missile with upgraded Mirage 2000s already in service with the IAF.

The silent infrared seeker of the missile provides it unique stealthy interception capability.