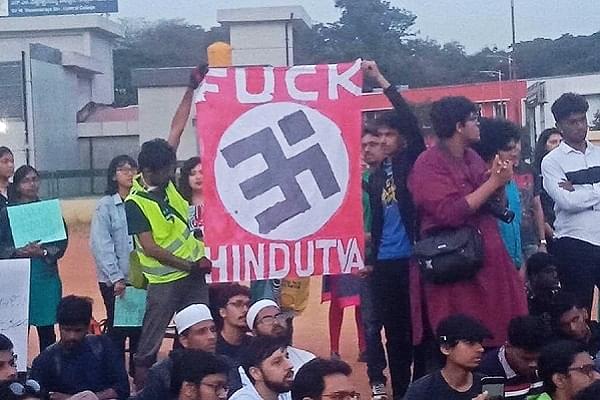 India has been witnessing protests of some sections in the recent times, over the issues of CAA-NRC, and now over the violence in JNU.

These protests, purportedly for saving the values of Indian Constitution, displayed on many occasions, the tendency of resorting to violence, damage and destruction to the public property, but also many instances of overt Hindu-hatred.

The leaders of such protesters often clarified that they were protesting Hindutva/Hindu Rashtra and not Hinduism or Hindus.

If such is the case, then why symbols/deities associated with Hinduism/Buddhism/Sikhism/Jaininsm are being morphed in order to make a political point?

It is also not the case that such manipulation remains routine in India irrespective of religion (unlike, say, Charlie Hebdo, which insults all the major religions routinely).

The imagery of the fierce Goddess Kaali remains popular and revered in India. In this form, the Goddess is popularly depicted with eyebrows are lowered and drawn together making a V-like shape. There is redness in eyes.

The most characteristic feature is the long tongue sticking out of the Goddess’s mouth.

The below poster uses the symbolism of the Goddess Kali imagery, however, wraps the head in a Hijab.

Goddess Kali, on the other hand, is shown with hair that is black, long, flowing, and scattered in all directions - representing her fierce form.

“Goddess Kaali’s hair flow with complete freedom. She has risen above her mortal body so she doesn’t wear anything except a skull-garland. She attacks our deepest demons and frees our soul. Wrapping her in a “modest” garment attacks everything she stands for,” commented one Twitter user.

The distortion of Devi’s image by making her wear a Hijab is especially offensive in the background of the Hindu persecution, and destruction of Hindu temples by Muslim invaders. For example, a famous Devi temple and centre of learning, Sharada Peeth, in Kashmir was completely destroyed.

In several Islamic nations, merely having the image of Kaali on the mobile phone can cause one to be punished, let alone superimposing Hindu symbols on scared Islamic figures/icons, say a Quran, that may attract death penalty under Islamic laws.

In an incident of hateful sloganeering, the anti-CAA protesters were seen chanting “In Kafiron se Azadi” in Odisha’s Bhubaneshwar. In the video going viral, a man can be seen raising slogan, “Hum leke rahenge Aazadi. In Kafiron se Azadi” with the crowd in support.

Kaffir is an Arabic term used derogatorily to refer to those who do not believe in Allah or Islam. While scholars have historically disagreed on whether to apply the term to other “people of the book” - Christians and Jews - there has been a consensus that a polytheist is a kafir.

In their memoirs on invasions in India, enslavement and plunder, the Muslim invaders used the term Kafir for Hindus, Buddhists, Sikhs and Jains, many historians have noted.

‘Om’ as a Nazi symbol

A poster emerged from anti-CAA protest in Bengaluru which desecrates ‘Om’ - a sacred symbol in Indic religions.

‘Om’ is also referred as ‘Omkar’, ‘Onkar’ and ‘Pranav’, as is understood as the sound of the universe, and held sacred by Hindus, Buddhists, Jainas, as well as Sikhs in different forms.The poster modifies ‘Om’ into a Nazi symbol, with the words “F*ck Hindutva”.

Protesting against the CAA, a mob attacked and desecrated a temple in Bihar’s Patna on Saturday, 21 December 2019. The helpless bystanders shot the video of the alleged incident and posted them on the social media. Pictures of the vandalised temple, along with the broken idols were also posted.

The mainstream media channels failed to report the incident.

‘When All Idols Will Be Removed...Only Allah’s Name Will Remain’

The Faiz poem sung widely by the anti-CAA protesters includes the lines about removing the idols from the Kaaba, and how only Allah’s name will remain.

The lines, in the context of the history of persecution of Hindus as ‘idol-worshippers’ and brazen destruction of their temples, are offensive to a lot of Hindus.

The defenders of the poem accused those who had a problem with the poem of ‘cultural illiteracy’, saying that the poem was sung by those in Pakistan who protested the military rule.

However, there is no obligation upon the Hindus to share in this context if they find the lyrics offensive based on their own history.

However, many of these songs incorporate negative stereotypes of Jews (as a recent Church of England report admitted).

Can the Jews be forced to be okay with these songs because of the ‘context’ of celebration that is more or less cultural (rather than merely religious)? What if a Jewish boy is forced to sing such a song as part of Christmas celebration in his school?

Similarly, before the American civil war, a lot of poems, letters, even video films were produced in southern America, that extolled the southern way of life - farming which is close to nature, close-knit families and friends, and community values, as opposed to the capitalist greed of the industries that alienates a man, destroys human relationships.

One couldn’t be but be filled with a warm fuzzy feeling reading such a description of the southern life - which was portrayed much like a communist utopia, where one “could fish in the morning, hunt in the afternoon, rear cattle in the evening and do critical theory at night”.

However, these poems and videos also contain, overtly or covertly, a defence of slavery.

If one decides to use these poems today, say, to protests against the aggression of industrialisation and urbanisation into the erstwhile farmlands and farming communities, one is free to do so. But to expect the victims of slavery to be okay and accepting of it is downright insulting.

The ‘artistic value’ or 'context’ is irrelevant here. If not, for his indisputable artistic contribution and context of a field like opera, renowned singer Plácido Domingo should not be held accountable for multiple allegations of sexual harassment.

Faiz’s poem was one of the several options that the protesters had, but as a Jamia ‘shero’ made clear, “We have submitted completely towards the almighty. We have abandoned secular slogans long before”.

“La ilaha illallah Muhammadu rasoolullah. This is our slogan. This will be our slogan” reads one post.

She also shared the picture of a Hijabi holding an assault rifle, and another showing burka-clad women pelting stones. “Don't underestimate the power of HIJABI," was the caption.

Other posts were discovered in support of Yakoob Memon, Afzal Guru, both convicted terrorists.

These Jamia sheroes were given extensive coverage by different media channels. Soon after these posts were discovered, the Facebook accounts went down.

When India Today asked one of the Jamia girls how she could justify opposing secularism living in a secular country, she reportedly disconnected the call and did not respond.