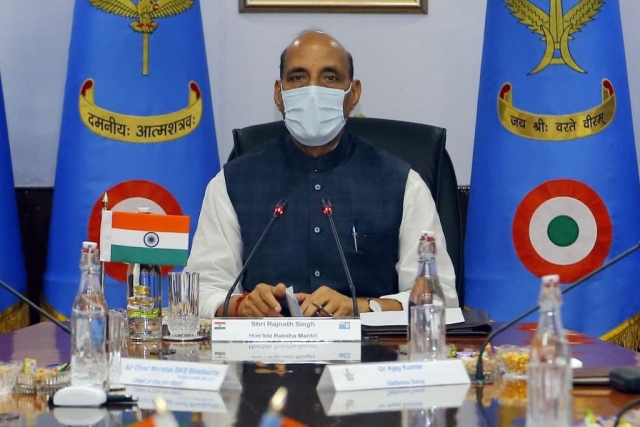 Singh announced the draft policy through a tweet on Monday. "In order to provide impetus to self-reliance in Defence manufacturing and to position India amongst the leading countries of the world in Defence and Aerospace sectors, a draft Defence Production and Export Promotion Policy 2020 (DPEPP 2020) has been formulated," he said.

Identifying defence manufacturing as a potential driver to give a fillip to the overall economy, the policy has set a target of Rs 35,000 crore ($5 billion) of exports in defence and aerospace goods and services in this period. The policy aims to make India a part of the global defence supply chain.

The DPEPP 2020 is envisaged as overarching guiding document of MoD to provide a focused, structured and significant thrust to defence production capabilities of the country for self-reliance and exports.

The policy proposes to develop a dynamic, robust and competitive defence industry, including aerospace and naval shipbuilding industry to cater to the needs of armed forces with quality products.

It also seeks to reduce dependence on imports and take forward "Make in India" initiatives through domestic design and development. The policy's aim is to promote export of defence products and become part of the global defence value chains.

According to estimates, the Indian Armed forces are projected to spend around $130 billion in capital procurement in the next five years, reports Times of India.

It emphasizes creation of an environment that encourages R&D, rewards innovation, creates Indian IP ownership and promotes a robust and self-reliant defence industry.

The policy brings out multiple strategies under the focus areas of procurement reforms, indigenization and support to MSMEs/startups, optimize resource allocation, investment promotion, FDI and Ease of Doing business, innovation and R&D, DPSUs and OFB, quality assurance and testing infrastructure and export promotion.

The vision as stated in the policy is "To make India amongst the leading countries of the world in Defence sector, including Aerospace and Naval Shipbuilding sectors, from design to production, with active participation of public and private sector and thus fulfilling the twin objectives of self-reliance and exports".

It should be noted that at the 11th DefExpo in Lucknow in February this year, Prime Minister (PM) Narendra Modi had emphasised that the lack of proper policy initiative in the last several decades had turned India into the biggest importer of defence platforms and that the incumbent government has taken a series of initiatives to cut the dependence on foreign acquisitions.