Hathras: Yogi Adityanath Remains The Common Target In Verbal Attacks From Mayawati And Akhilesh Yadav, The Two Friend-Rivals Spare Each Other 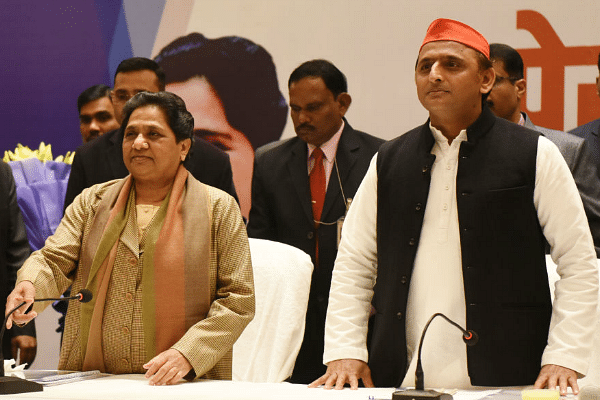 In the process, they have spared each other.

This seems to have have infused some hope in sections of the Left-aligned media -- that feel that the BSP, SP, along with some help from Congress could convert "a four cornered contest into a two cornered one."

At other times, the sections of Left-aligned media want "UP ka ladka" (Yadav) to make headlines and question why he has "fallen silent."

Let's look at what coming up from Mayawati's arsenal of verbal attacks for Adityanath.

Mayawati has not been pleased with Adityanath-ruled Uttar Pradesh, particularly since the bhoomi pujan in Ram Mandir, Ayodhya. She launched a campaign to woo the Brahmins.

Hathras revolves around a Dalit girl and her family. Naturally, it would see her attacks on Adityanath intensifying.

She has launched fresh attacks on the Bharatiya Janata Party-led government in the state. Mayawati seems to be carefully laying her words and actions before the media through social media.

In a video message, Mayawati addressed rivals Congress and BJP as "Congress va (and) BJP and company".

Interestingly, she spared the Samajwadi Party in the list, and said whenever the two parties (Congress-BJP) are leading the government in Uttar Pradesh, they exploit the certain sections ("hamare in vargon ka" -- meaning the SC-ST communities) at every level.

She added that the sections are excluded from development.

She said that the rivals (Congress and BJP) resort to drama when it comes to the atrocities on the women from these sections of the society -- "Hathras being one example before us," she said.

She accused the BJP and Congress of collaborating secretly, and doing everything to keep the groups under subjugation, which they have been doing for centuries ("aur inhe sadiyon ki tarah hee apnaa ghulam baaye rakhna chahti hain").

She said that parties are putting up a show and are pretending out of political selfishness.

However, Mayawati's attacks on the government have not impressed everyone.

Members of the from the Jatav community in Agra staged protests against Bahujan Samajwadi Party (BSP) chief Mayawati. The reason for their anger: she did not visit the family of the victim of the alleged gang rape, and murder in Hathras.

Slogans were raised against her, posters and flags were burned. "She has deceived the Dalit samaj," said Ramveer Kardam, one of the protestors.

Among leaders in UP chief minister Yogi Adityanath's opposition, Rahul Gandhi and Priyanka Gandhi have visited the grieving family in Hathras.

Mayawati's move -- of maintaining careful distance from the Hathras victim's family -- has been noticed and mentioned in many sections of the local media.

Samajwadi Party leader Akhilesh Yadav has been more proactive on his offensive against the Adityanath government. He said that the officers responsible for the atrocities on the victim and not the family members of the victim should be put under the narco and polygraph testing.

This report quotes Yadav as saying: “In the Hathras incident, the manner in which the BJP government delayed medical treatment to save some of its people and also postponed filing the FIR, has angered the families across the country...Instead of protecting the government through its spokespersons and through WhatsApp messages, it should get the matter investigated through the Supreme Court sitting judge."

He criticised the Adityanath-led government for "stopping" the workers of Samajwadi Party from entering the village in Hathras.

He has criticised the government and state police for the lathi charge on Rashtriya Lok Dal leader Jayant Chaudhary.

He has accused the administration under Adityanath of trying to hide and subside the angry protests surrounding Hathras.
He has also demanded FIRs against the SP and DM of Hathras.

The Samajwadi Party led by Yadav has also accused the Adityanath government of birthing "DM-SP gangs".

In all, both Mayawati and Akhilesh have been kind to each other and Mayawati has inflicted a light and soft verbal lash on Congress. Adityanath remains the common target.