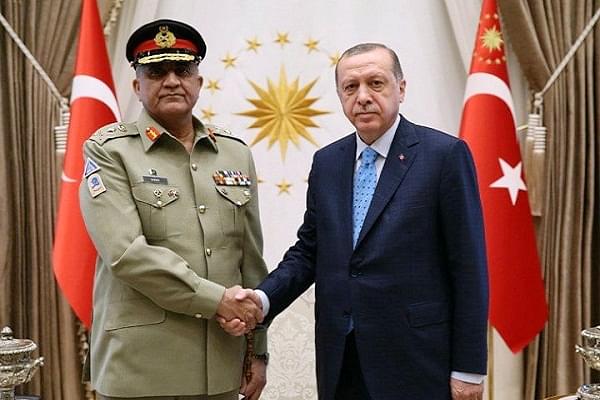 Around 15 years after Pakistani scientist Abdul Qadeer Khan confessed to nuclear smuggling and illicit exports of nuclear weapons, the Islamic Republic is once again in the news over suspicions of nuclear proliferation.

Turkish president Erdogan has reportedly told his party faithfuls that the West’s push for non-proliferation is not acceptable for him. “Some countries have missiles with nuclear warheads, But the West insists we cannot have them. This, I cannot accept,” he was quoted as saying by New York Times (NYT).

If Turkey follows through with the threat of acquiring nuclear weapons, it would become the first NATO member to break out of the treaty and independently arm itself with the ultimate weapon.

Trump’s disclosure caused a lot of brouhaha, especially as it came at a time when Turkey-US ties are strained to say the least.

In his characteristic style, Trump assured the safety of the weapons. “We’re confident, and we have a great air base there, a very powerful air base,” he said.

Trump’s remarks are, however, unconvincing. In 2016, when Erdogan brutally suppressed a military coup, Obama administration had felt the need to draw up a contingency plan to remove the weapons from Turkey.

However, the plan was never put into action, based on the thinking that a withdrawal would further strain Turkey-NATO ties and give Erdogan a reason to build nuclear weapons of his own.

Turkey, with the support of Russia is already building nuclear reactors. Like Iran, Turkey also claims that it intends to use these reactors for civil nuclear energy use. However, the question looms large about the spent fuel. The spent fuel can be used in powering nuclear weapons, and Erdogan has not made it clear how he intends to handle it.

Nuclear experts say that the hard part in building nuclear weapons is obtaining the fuel, and not design or blueprints. Turkey is rich in Uranium deposits and has been building its capacity to purify uranium as well as to turn it into plutonium, the two main fuels of atom bombs.

While Turkey denies a secret nuclear arms programme, noting that it is “part of NATO’s collective defence system”, it has strongly defended its right under “peaceful global accords to enrich uranium and reprocess spent fuel”. These two steps are critical in making a nuclear bomb.

In 2004, a rogue Pakistani nuclear scientist Abdul Qadeer Khan's confession revealed to the public a vast network operating under radar, which had, over close to two decades, provided nuclear technology, expertise, and designs to Iran, North Korea, Libya and possibly other countries.

This largest illicit nuclear proliferation ring in history was also found to be connected to China.

Under increasing US pressure, Musharraf administration arrested Khan after US provided concrete proof of him spearheading the global illegal nuclear proliferation network. Khan subsequently disclosed that nuclear technology was given to North Korea, Iran and Libya.

While Pakistan government denied any hand in this, the WMDC headed by Hans Blix, a former IAEA chief and UNMOVIC chief said in a report that Abdul Qadeer Khan could not have acted alone "without the awareness of the Pakistan Government".

As the reality of this nuclear proliferation ring was uncovered, international sleuths found Turkey to be a covert industrial hub for the nuclear black market run by Khan.

According to a report by International Institute for Strategic Studies, Nuclear Black Markets, companies in Turkey imported materials from Europe, making centrifuge parts and shipping finished products to customers.

Turkey itself is suspected of being a customer of Khan’s. A former German defence official Dr Rühle is quoted as saying that the idea that Turkey could possess a considerable number of centrifuges of unknown origin “does not appear far-fetched.”

Another member of the Quad (China, Malaysia, Pakistan, Turkey) that opposed India’s recent move on Kashmir in United Nations- Malaysia- also reportedly had links with the Pakistani nuclear smuggler.

At the time of revelation, despite being caught openly proliferating nuclear technology via black markets, Pakistan escaped punitive action due to the US’s perception that Musharraf was important for its War on Terror in Afghanistan, and his successor might be averse to US interests.

Instead, Khan was scapegoated. While pardoned of all the charges, the nuclear-hero of Pakistan was practically put under house arrest and was always accompanied by secret services agents of Pakistan.

Recently, though, the nuclear smuggler with the reputation of a hero in Pakistani media, resurfaced, and was found giving a speech to students in University of Karachi.

Interestingly, the disgraced scientist doesn’t have any research to his name in the nuclear field, and is a metallurgist by training. His contribution to Pakistan’s nuclear programme is allegedly stealing the blueprints of centrifuge designs from Urenco.

In his address, Khan said that Turkey and Malaysia are countries which should serve as an example for Pakistan.

Khan’s statement points toward a sinister nexus in the making between Turkey, Pakistan and Malaysia. All three have seen rising Islamism and authoritarian leadership in the past few years.

Pakistan is a rogue state with nuclear capability and a dwindling economy in urgent need of money. Turkey is also witnessing an economic slump while Turkish president Erdogan harbours ambitions of being the leader of the global Muslim community. It is also widening its strategic blueprint, including in South Asia.

Steered by the economic prowess of China, the iron-brother of Pakistan, the new Quad has potential to counter Indian interests and boost radical Islam in the region.