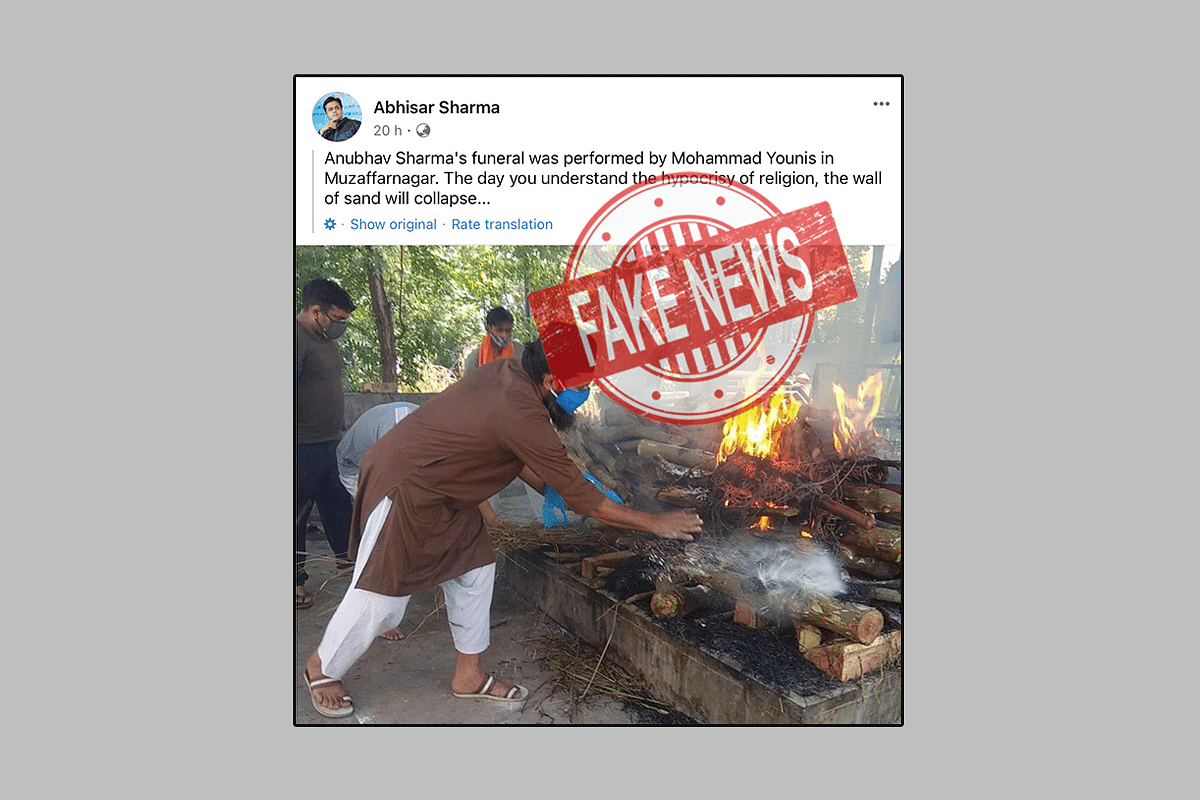 There is a category of ‘heart-warming’ stories that keep emerging in times of crisis and deaths – that of Hindu men helping bury a Muslim person’s body or Muslim men helping perform the last rites of a Hindu person.

Mostly, it is the latter, amplified by influential social media accounts who push these stories by adding a liberal dose of guilt and shame for anybody who has been raising questions on the ‘liberal’ narrative that minority extremism and aggression is a myth.

The latest such story to emerge in the current coronavirus crisis is that of one Mohammed Yunus performing last rites of his friend Anubhav Sharma from Muzaffarnagar district of Uttar Pradesh. A picture of Yunus near the funeral pyre of Anubhav has been widely shared on social media.

One of the most viral posts is from a Facebook account in the name of former news anchor Abhisar Sharma that has about 27,000 shares already. The account has about 1 million followers.

The post said (as translated), “Mohammed Yunus performed the last rites of Anubhav Sharma in Muzaffarnagar. The day you understand the hypocrisy of religion, the wall of sand will collapse…”

On Twitter, a post by Kashif Kakvi, who has described himself as a journalist with website Newsclick.in in his bio, says that Anubhav’s family did not come forward to perform his last rites and it was for this reason that skull cap-wearing Yunus lit the pyre.

Readers may recall here that in February, the Enforcement Directorate raided the premises of the website’s office and its directors in connection with investments of Rs 30 crore from three US companies.

Ironically, Kakvi’s post was shared and amplified by Mohammed Zubair, co-founder of Altnews.com, which describes itself as a fact-checking website.

The post has been shared by several verified Twitter accounts including Imran Pratapgarhi who has about 9 lakh followers.

On Facebook, it has also been shared by news anchor Ravish Kumar who has 2.4 million followers on the platform. “Think, understand and wake up,” wrote Ravish (in Hindi) while sharing a screenshot of the picture posted by Twitter user Aadesh Rawal, who has described himself as a journalist in his bio.

Sharad said that he was glad that someone from the media fraternity has called for his version at long last and he was keen that the “misinformation” regarding the funeral rites of his brother was clarified.

Sharma said that the picture is misleading. “I have performed the last rites of my brother with my own hands. People from my [Hindu] community, from my family, were all present,” he said.

Sharma said that Mohammed Yunus works as a driver for the Sharma family’s business and was a friend of Anubhav. “He is my friend too and he was with us all the time, but the last rites were performed by me, in presence of my family and my community,” he said.

As per Sharma, the “fake” news began with a news report published in Hindi daily Amar Ujala. “The newspaper published a picture of Yunus, sourced from god knows whom, with their own imagined version. They talked neither to me nor to Yunus,” he said.

Sharma said that the picture shows Yunus adding a powder to the pyre. The powder is called “raal” in Hindi and is added so the pyre catches fire easily.

“Before Yunus, our panditji added 5 kg of raal, but nobody published panditji’s picture in the newspaper,” he said. “Anybody standing at the spot can add raal to the pyre. It’s a gesture of being together. There is no problem with that, but I repeat – it was I was performed the last rites of my brother.”

Sharma said that he is hurt and stressed by the news report and subsequent viral posts on social media. “See, friendship is one thing, but to present a gesture of friendship with claims that no one from his family came forward for the last rites is plain wrong.”

“Also, my brother did not die of corona,” he said.

Sharma said that Anubhav had a sharp pain in his arms for about four-five days, which the doctors said was related to cervical. The family could not procure a hospital bed for him. “If my brother had corona, would the administration have given us permission to perform funeral rites like this?”

Ironically, Sharma is a reporter himself. He said he brings out a print magazine named ‘On Duty’. “Yet, no reporter contacted me before publishing the false report. They just went by this picture, ignoring all the other pictures where my younger brother is standing near the pyre, where panditji is helping us, where I am conducting the rituals,” he said.

Asked if he could provide any pictures from the funeral, Sharma said that no one in his family had taken pictures. “It was not an occasion to take pictures. We don’t know who clicked Yunus’s picture, but I am sure that anybody who took pictures of the event would have pictures of me, my family and the gathering.”

“Please bring out the truth of this story and state our version through your publication,” Sharma told this correspondent.

The Amar Ujala report that Sharma referred to was published on the second page of its Meerut edition on 27 April. The report, which has no byline, shows a picture of Yunus near the pyre with the headline: “Muslim friend performs last rites.” The report says that Anubhav died of coronavirus. The report carried no quotes, not even of an eyewitness.

Sharad Sharma said that he would have taken to Facebook or his own magazine to clarify the misinformation, but he has been too busy to do that. “Ma'am, you can understand my situation. I have not opened any social media account for a week. I depend on you for clarifying the story,” he repeated.

This ‘heart-warming’ story thus is actually a story of using a picture out of context to spin a false narrative.

It could be that the intention of the reporter was good, that he was perhaps trying to spread a message of communal harmony. However, it has evidently aggravated the pain of the aggrieved family of Anubhav.

In addition, it has served as a tool for certain ‘secular’ social media users to deny the reality of minority extremism. The same users and so-called journalists who amplify false claims like the Muzaffarnagar one, keep eyes and ears perennially closed to all the routine cases where Muslim men trap Hindu women or kill them for turning them down or take out massive rallies with “sar tan se juda” slogans.

This correspondent busted a similar false claim last year too.

The Times of India‘s Hyderabad edition had published a front page report saying “5 Muslim men organise last rites of Hindu man shunned by neighbours”. The Hindu man’s family strongly refuted the report and released an audio recording where one of those five Muslim men was heard apologising to the man’s family for misleading the media.

The family even gave a complaint to the police citing loss of reputation. The police however said the case merited no first information report.