How Tamil Nadu Is Tackling The Coronavirus Outbreak 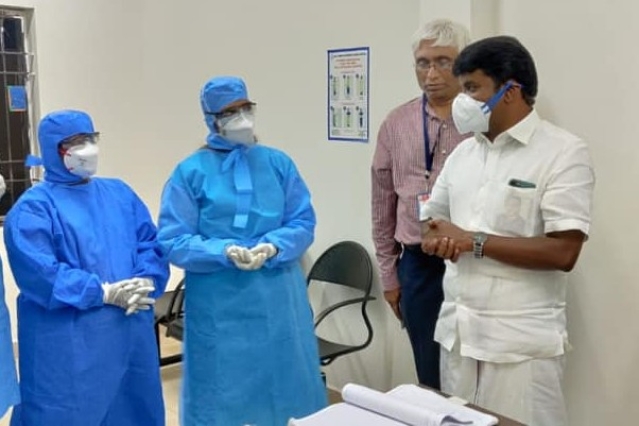 Until Friday (20 March), Tamil Nadu has reported that three persons have tested positive for Coronavirus (Covid-19). One of the three has already recovered and got back home.

The second is a person hailing from Rampur in Uttar Pradesh, who came by train from Delhi and was working at a salon as a hair-dresser.

The third case is a 21-year-old student who came from Dublin, Ireland on 17 March.

The second and third cases were reported on 18 and 19 March respectively.

Till now, the Tamil Nadu government has screened over two lakh persons. Of these, 3,481 persons have been kept under home quarantine conditions and another 39 in isolation wards.

Though the mainstream media has criticised lack of facilities to screen passengers arriving by train, the Tamil Nadu government measures, including preventive ones, have come in for praise.

Tamil film star Rajinikanth, on Thursday lauded the steps taken by the State to prevent the spread of the pandemic virus, in a tweet.

One of the preventive measures the State Government has taken is to screen all passengers arriving at airports and sea ports.

The Tamil Nadu Government was among the first to launch measures to tackle Covid-19. On 30 January, it put under house quarantine 78 people who had landed from China, the origin of the pandemic virus.

State Health and Family Welfare Minister C. Vijayabaskar said there was no need for any panic as preventive measures had been put in place and the government had begun paying more attention after Kerala reported its first case.

The State also came up with a helpline to tackle the pandemic but more importantly, the government made full use of the social media to spread awareness.

However, it is the work by the Health Department staff at the ground level this week that has left the people impressed.

Lower rung staff of the Department are going to every house in a given locality and gathering data on residents suffering from fever or any other communicable diseases.

In particular, when the second case of a person who came from Uttar Pradesh was reported, it took more drastic measures in that area, including closing the salon in which the person worked.

Seven of the person’s room mates were quarantined immediately, while another resident at their complex was sent to the Rajiv Gandhi General Hospital for screening.

Media reports said that the Uttar Pradesh youth’s co-passengers mobile phones are being tracked to ensure the situation does not get out of hand.

The entire locality of the salon worker was disinfected and fogged with the Health Department officials' work extending beyond midnight.

The door-to-door visit of the Health Department officials is helping the government to get data of people who have recently returned from abroad and keep a watchful eye on the locality.

In one case, the officials got to know a youth had returned for Germany recently. They then called him up to check his health status.

However, the officials are handicapped with some people being reluctant to share details. But they maintain their vigil checking out at shops, restaurants and grocery stores nearby.

If there is one black mark in the effort of the State government, it is its reluctance to convince a few groups that had been protesting against the Citizenship Amendment Act (CAA), 2019.

On 18 March, anti-CAA groups took out processions in various parts of the State.

Fortunately, the activists have decided to suspend their agitation until the Covid-19 situation improves but the danger had existed until then since the break of the pandemic virus.

The Tamil Nadu government has been successful in a few other measures such as closing down educational institutions, prevailing upon temples to cancel festivals and churches to call off masses until 31 March.

Besides, the private sector in the State has acted with alacrity giving its employees the option of working from home wherever possible.

In addition, the State government has shut its borders. It is thoroughly checking those entering the States before allowing them to proceed.