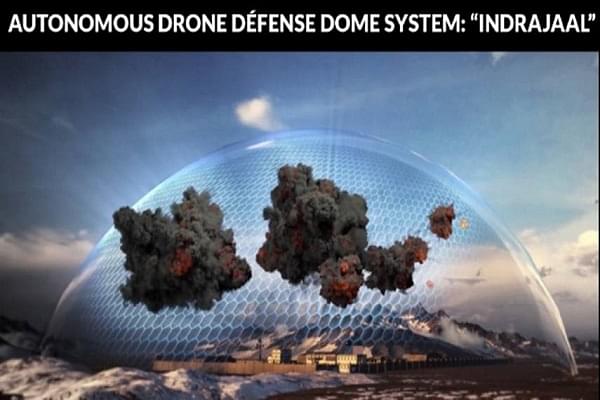 The company said each such system could protect a large area of 1000-2000 sq. km against threats such as Unmanned Aerial Vehicles (UAVs), incoming weapons, loitering munitions etc.

Executive director Gopi Reddy said that about half a dozen or more Indrajaal systems with seamless connectivity could protect the entire western border from Rann of Kutch to Kashmir within a few months rather than install 300-point defence anti-UAV systems at a great cost, reports The Hindu.

“Conventional defences will be overwhelmed in a swarm attack scenario and an AI-enabled autonomous dome with its own ecosystem of sensors and processing is the way forward,” said CEO-defence Wg Cdr MVN Sai (Retd).

“Indrajaal is capable of identifying, assessing, deciding, acting and evolving autonomously in real-time, round the clock. Whether the threat is single or multiple or a combination of UAVs, loitering munitions and such, the system is capable of countering all such threats. It can be integrated with the current weapons infrastructure,” Gopi Reddy said.

“We have been working on Indrajaal for last two years. Once approved, we can set up a pilot plant covering 100-250 sq. km in 90-120 days and up to 2,000 sq. km in three months from there. We can work with legacy systems or deploy new ones using our data,” he said.

The 27 June attack by Unmanned Aerial Vehicles (UAVs), commonly called drones, on the IAF station in Jammu and the subsequent sighting of more such aerial intruders in nearby places, has increased the focus of India’s security establishment on countering such threats.

The Defence R&D Organisation (DRDO) has been mandated to develop indigenous capability in military drones for almost a decade. Its flagship is the “Rustom” drone.

Recent procurement actions of the Armed Forces point to the strategic thinking that drones could play a role in conventional battlefield scenarios. The Army has floated tenders for fixed-wing drones to operate over a distance of 100 km and with an endurance of 4 hours and with 30 kg payloads.

Also, on Army Day 2021, 15 January, the Army demonstrated in public, for the first time, its ability to deploy a swarm of 75 quadcopters (i.e., four propellers) drones in an offensive manoeuvre.