ICC CWC 2019: India’s Semi Final Exit Cost Star Sports Dearly And Not For The First Time, Here Are The Numbers 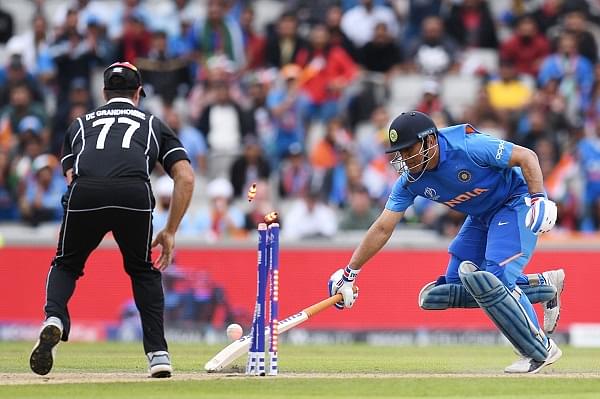 So close, yet so far. MS Dhoni races to reach back during the ICC Cricket World Cup semifinals against New Zealand. New Zealand bet India to play England in the finals, where they lost to the hosts on ‘boundaries’ after drawing the match twice. (image via @cricketworldcup/Facebook)

ICC Cricket World Cup 2019’s official broadcaster Star Sports is said to have lost between Rs 10 crore to Rs 15 crore in advertising revenue after India failed to reach the finals, which was played on Sunday (14 July), Hindustan Times reports.

Virat Kohli led India lost a rain interfered semi-final against New Zealand on Tuesday (9 July) and Wednesday (10 July) by 18 runs, leading to disappointment for billions of fans. However, according to a HT report, it would be Star India’s sports broadcasting arm which would pay for India missing out a chance to lift the famous trophy.

The final played on Sunday (14 July) between England and New Zealand, was won by hosts England. In an incredibly tight final, the match was tied twice- after 50 overs as well as super over. England were crowned champions on the context of hitting more boundaries in the match.

According to an previous Livemint report, Star would have charged last-minute advertisement spots at Rs 25 to 30 lakh per 10 second if India would play in the finals. However, they ended up selling the spots for Rs 15 to Rs 17 lakh per 10 second.

According to media consultant Harsha Joshi, Star may not have a significant revenue loss as Star had sold the ad spots in bundled deals, leaving very small inventory for last minute buys.

“But the opportunity of selling a few last-minute spots has been lost because of India’s exit,” she said, explaining that if Star could have earned Rs 8 to 10 crore if they were able to stick at original prices.

This is not the first time Indian cricket team’s loss has potentially affected revenue of an tournament. The highly anticipated India vs Pakistan game was partially affected by rain, however, if rain gods had not shown mercy, broadcaster Star Sports and sponsors like Coca-Cola, Uber, OnePlus, MRF Tyres were set to lose Rs 137.5 crore, BT reported.

Back in 2007, the world cup suffered from issues like pricing of tickets, low attendance and a dull final experience due to management and umpiring. Amidst controversy, one ray of hope the edition held was the record of highest sales ever from any of the world cups at 32 million USD revenue, double than that of 2003 WC (excluding 2019).

However, the tournament was not able to hit its targeted 42 million USD. One of the reasons it failed to do so was that of favourites India and Pakistan failing to make it past the group stage and removed the possibility of a match between the arch-rivals, which is considered as the one of the high revenue generating matches in any tournament.