Iconic Spot In The Making: A 40-Storey Structure To Rise Alongside New Delhi Railway Station 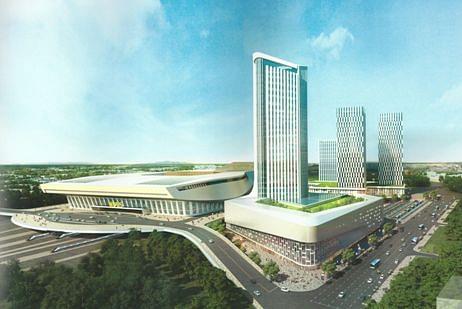 An artist’s impression of the project.

The New Delhi Railway Station is set to become an iconic place in the country with a new two-storey structure replacing the existing building. This will be in addition to a 40-storey high-rise building which will house hotels and an office complex and other commercial establishments.

The railways has sought private participation to redevelop the station complex at an estimated cost of Rs 6,200 crore.

Almost all other buildings near the station will make way for the new massive structure involving four flyovers and a 25 km road and a wide pedestrian boulevard with shopping areas on both sides.

Tractable Engineering, a multi-national company, has prepared the design of the proposed station building and its adjoining development.

It will be a unique redevelopment as the project would connect East Delhi with West Delhi and special care has been taken not to disturb the Connaught Place through construction of flyovers and pedestrian path to reach the station, said a senior RLDA official involved with the project.

All public transportation system including Airport Line, Metro and bus movement will be interlinked with New Delhi station with an integrated system, said the official.

Development of adjoining Karnail Singh Stadium will also be integrated.

According to the design submitted to the RLDA, the redeveloped station would have separate arrival and departure sections. It would also feature a large concourse along with passenger facilities such as lounges, food courts, retail and rest rooms, to allow passengers to relax while waiting for trains. This concourse would be distinct from the platform levels at the two-storey station building.

However, the adjoining area will have high-rise structures to house five-star and budget hotels, serviced apartments, retails, office premises and also multi-level parking lots among other commercial facilities.

The high-rise structure can go up to 40 storeys as there are flying zone restrictions and also the DUAC does not permit beyond that, said the official.

According to the bid document, the project would be given out on a design build finance operate transfer (DBFOT) basis for a concession period of 60 years to a private developer or consortium.

The RFQ, approved by PPP Appraisal Committee (PPPAC), is slated to open on 6 November which will be followed by request for proposal (RFP) next year.

PPPAC approval is also needed for the RFP and we are expecting the RFP to be opened in June next year and the selected player would get four years to complete the project, said a senior RLDA official involved with the prestigious project.

The architectural expression of the proposed station is envisaged to be a signature development and relatable to both historic and modern Indian culture that gives it a unique identity.

The New Delhi station, largest and busiest with 4.5 lakh daily footfalls, was handling about 400 trains daily before pandemic.