In His Book, Ex-VP Hamid Ansari Recalls ‘Unusual’ And ‘Authoritative’ Confrontation By Modi Over Bills Stuck In RS 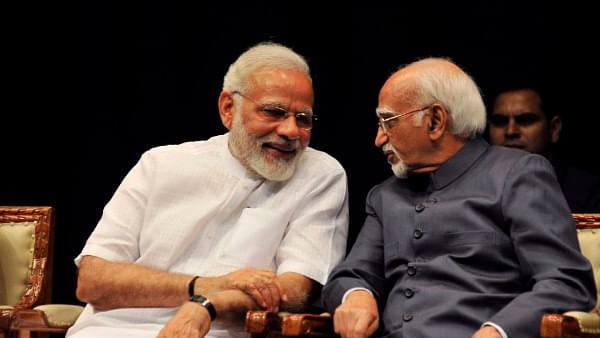 Former Vice President Hamid Ansari shared a peculiarly dicey relationship with Prime Minister (PM) Narendra Modi. The ex-diplomat reveals in his latest book ‘By Many A Happy Accident’ that PM Modi had confronted him over his unwillingness to let bills pass in a din in the Rajya Sabha.

Ansari was the chairman of the upper-house of the parliament for the first three years of the BJP-led NDA’s 2014-19 term in office. On one of the days, Modi personally took up this issue with Ansari by promptly visiting the latter’s office and demanding smoother cooperation from him.

Ansari alleged that BJP’s government felt that it could prevail over procedural impediments in the Rajya Sabha due to its majority in the Lok Sabha.

“An expression of this was conveyed to me authoritatively, and somewhat unusually, when one day PM Modi walked into my Rajya Sabha office unscheduled. After I got over my surprise, I made the customary gestures of hospitality. He said ‘there are expectations of higher responsibilities for you but you are not helping me. Why are bills not being passed in the din?’ he asked,” the former Vice President writes in his book, reports Times of India.

Ansari took some particularly debatable stances towards the fag end of his tenure at the second-highest post in the country. Modi perhaps attributed that to Ansari’s professional career and indicated the same during Ansari’s farewell in Rajya Sabha. “A big part of your working life was in West Asia... in the same atmosphere and debate... after retirement, it was minorities commission or AMU... that was your circumference,” the Prime Minister had quipped.

Ansari had courted controversy by not saluting the National Flag when it was hoisted during the Republic Day parade of 2015. Ex-President Pranab Mukherjee, PM Modi, former US President Barack Obama along with his wife Michelle Obama and ex-Union Defence Minister Manohar Parrikar were seen standing in attention when the national anthem was being sung at Rajpath. The protocol demanded only the then President Mukherjee to salute the flag at the time.

However, PM Modi and Defence Minister Parrikar joined the former first citizen in saluting the tricolor. Ansari didn’t do so and invited some rave reactions for the same. The rules didn’t require him to salute the national flag; but, the mere fact that Modi and Parrikar joined Mukherjee in the action meant that Ansari oddly stood apart in the group.

Similarly, the former Vice President was the only senior constitutional office-bearers to skip the historic International Yoga Day functions on 21 June, 2015. PM Modi had attended a mega program for the same in Rajpath. President Pranab Mukherjee held a function for the Yoga Day in the Rashtrapati Bhavan, though he was not invited to take part in the proceedings as per DailyO. However, Ansari had skipped the event altogether.

In 2019, the Sunday Guardian reported that Ansari had cooperated with the Iranian government and their spy agencies to dent R&AW’s operations in the West Asian country during his posting in Tehran from 1990-92. Former R&W officer NK Sood accused the ex-diplomat of outing an Indian officer’s name who was keeping eyes on some Kashmiri youths who regularly travelled to Iran to take arms training.

“Ansari gave the name of the officer who was handling this operation, D B Mathur, to the Iranian Foreign office, who passed it to SAVAK, and Mathur was picked up by them on a morning while coming to the Indian embassy. By the evening, it was clear that he has been picked up by SAVAK,” Sood was quoted in the Sunday Guardian report.