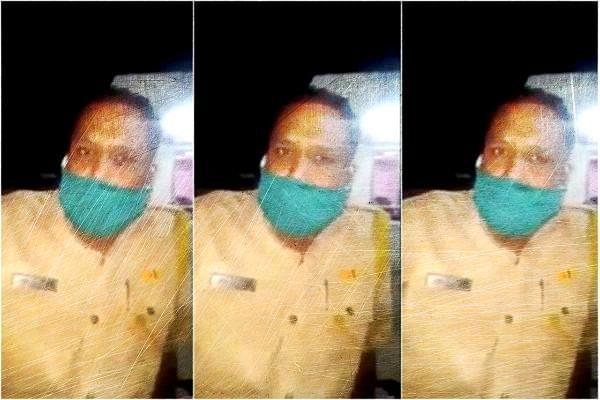 Screenshots from the video that went viral on social media.

As coronavirus infection is increasing in the country, the role of police is becoming increasingly important in enforcing guidelines of the lockdown to contain the spread of virus and to allow delivery of essentials to citizens.

While many police officers are honestly fulfilling their duties, it seems there are a few exceptions.

A video went viral on 14 April, in which a person, wearing police uniform, is seen abusing Hindus in the most vile manner.

In the initial part, the man is seen saying, “I am Mohammad Farooq Gauri. Homeguard supervisor. Within Jodhpur, there are 120 door-to-door cars, 15 e-rickshaws and 100 thelas that have been given permission by mandi secretary Ram Singh and mandi management Mohammad Farooq Gori”.

To this question, Gori says they are all Mohammadans. Then he starts referring to Hindus with abusive slurs, calling them dogs, madar**od, Gaa** fat**, ch***ya, and behen ke l**de.

After this, a debate begins between the two men on the topic of Tablighi Jamaat. In the later part of the video, the person in the background says, “Allah, Rama and Rahim all are one.”

Dainik Bhaskar today reported that Jodhpur Police has filed a case against the man and arrested him. The report confirms that the man has been identified as Mohammad Farooq Gori and is homeguard supervisor.

The newspaper has quoted Dharmendra Singh Yadav, DCP of Jodhpur East, as saying that the police’s IT team has checked the viral video and they found many objectionable words in it.

A handle of Jodhpur Police posted a video of Yadav commenting on the matter. Yadav has appealed people to not share any objectionable posts, photographs or videos on social media.

While many Twitter users posted the viral video on their timeline yesterday, the police have been requesting users to delete them.