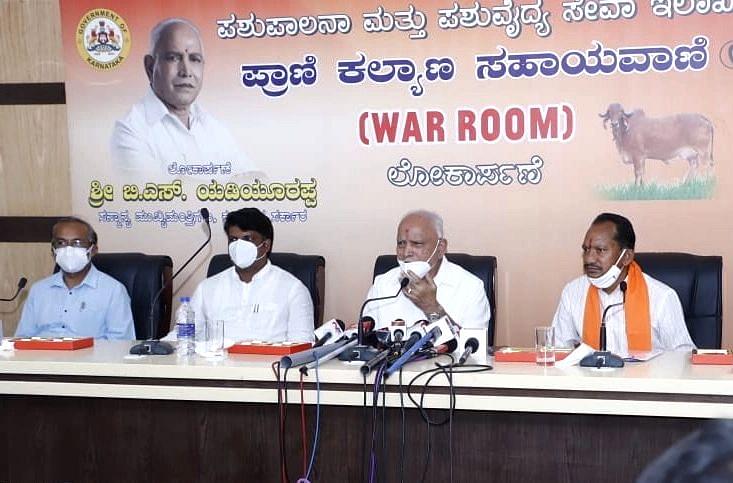 Animal lovers and welfare workers can now avail aid, facilitate rescue and coordinate animal care through a government portal that will coordinate and provide aid for all queries pertaining to animal welfare in the state.

This war room will help cattle breeders, dairy farmers and aims to boost the health and productivity of livestock in the state. Set up at the Commissionerate of Animal Husbandry and Veterinary Services(CAHVS) in Bengaluru, the war room has a helpline number that will be available 24*7 to address queries pertaining to animal care in the state.

Emphasising the need for the unique war room, Minister for Animal Husbandry Prabhu Chavan said it would be a boon for dairy farmers and cattle breeders as it would address their concerns.

Tweeting about the launch of the war room, Chavan said, “the nations first animal helpline has been launched. Farmers, animal rearers can call 8277100200 and avail information about medical aid, emergency treatmenmt and ambulance services, vaccination for animals and farmer training and animal care”.

People can also send a WhatsApp message to the number with the grievance, and action required will be undertaken based on the location by coordinating with the nearest veterinarians and medical staff.

The war-room has been set up at the cost of Rs 45 lakh and will be manned by three teams of seven each who will work in three shifts doing round-the-clock service. While there are many non-governmental and private rescue helplines, this govt helpline will work with other public agencies like the Karnataka Milk Federation, Bruhat Bengaluru Mahanagara Palike (BBMP), Forest department and veterinarians in both rural and urban areas.

“Animal husbandry has a huge contribution to the country’s GDP,” said CM Yediyurappa inaugurating the war room. “ The helpline will provide adequate, appropriate advice with regard to anti-cattle slaughter act and implementation”, he added.

The state notified the anti-cattle slaughter act earlier this year amidst a lot of political commotion over the same. The act called Karnataka Prevention of Slaughter and Preservation of Cattle Act, 2020 replaced the earlier 1964 act and was initially opposed by both opposition parties, but the Janata Dal-Secular (JD(S)) then supported the government in the Legislative Council.

The current bill bans all form of cattle slaughter, while the former avatar was less stringent and permitted the slaughter of bullocks and both male and female buffaloes certified as unfit for breeding or sick. There had been reports of farmers abandoning male calves after the law came into place, and the helpline will help rescue such calves and have them shifted to cattle shelters.