Kerala: Migrant Labourers Protest On Streets For The Second Time In Two Days Over Food 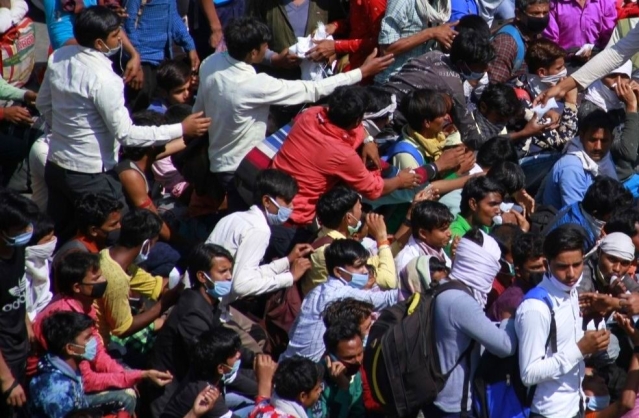 For the second consecutive day on Monday (30 March), Kerala faced protests from migrant workers with the latest one seeking ample quantity with roti (flat bread).

The protest defied the nation-wide lockdown to combat Coronavirus (Covid-19) and risking the spread of the pandemic.

Malayala Manorama reported that migrant workers residing at the Bengal colony in Perumbavooor, Ernakulam district, tried to stage a road blockade demanding roti and complaining about the quality of dal supplied to them.

Police intervened to bring the situation under control at the colony where 3,000 workers are reported to be residing.

State Agriculture Minister V S Sunilkumar said that atta (wheat flour) and roti-making machines were provided after they informed that they did not prefer local food.

On Sunday, 3,000 inter-state migrant labourers took to the streets in Payippad in Kottayam district defying the lockdown and blocked the Changanassery-Mallappally Road.

The migrants hit the streets as they had been starving since Saturday evening (28 March) and despite complaining, they received no food or help.

Over 10,000 migrant labourers, mostly from West Bengal and Assam, live in labour camps in Payippad Gram Panchayat. Locals there say that many of these migrants are actually from Bangladesh.

The migrants also sought arrangements to send them back home immediately. A Bengal native has been arrested in this connection on the grounds that he instigated the protests.

On the other hand, Kerala Kaumudi reported that a leader of the Centre of Indian Trade Unions (CITU), the Communist Party of India’s labour wing, has been booked for instigating about 400 migrants workers to stage a protest at Pattambi in Palakkad district.

Zakkeer Hussain, the leader, is the secretary of the CITU migrant workers union.

On 30 March, Kerala Chief Minister Pinarayi Vijayan alleged a conspiracy behind the protests to defy the national lockdown.

Vijayan told the media that there were clear leads on identifying those behind the protests and efforts to defame the State government.

So far, Coronavirus has claimed two lives in Kerala, while 234 persons have tested positive for the pandemic virus. This is against 47 deaths in the country and 1,400 Coronavirus positive cases.