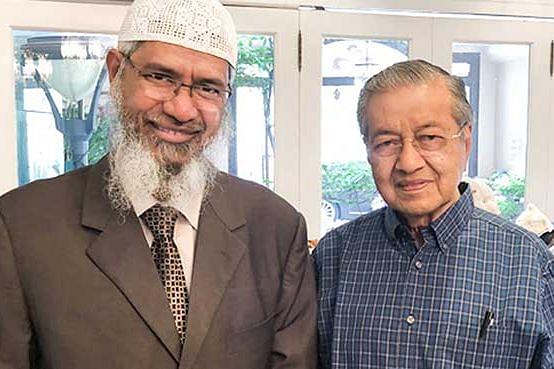 In a multiple choice examination paper, the question on Zakir Naik, who fled to Malaysia in 2016 after India began investigations into his activities, was as follows:

Zakir Naik is one of the icons of the Islamic world. He is very active in spreading true Islam and following the Quran and Sunnah of Rasulullah SAW. He is able to reason and to answer every question that is asked to him. However, in Malaysia, he is no longer allowed to deliver his preaching. In your opinion, as a Malaysian, why does this happen?

Universiti Malaysia Perlis, established in 2001, is in Malaysia’s northern region and some 35 km from the country’s border with Thailand in a town called Arau.

Naik is facing charges in India of provoking communal disharmony and indulging in unlawful activities that incited terror in the country. He is also under investigation in India and Bangladesh for the terror attack at the Holey Artisan Bakery in Dhaka in July 2016.

The examination paper lauding Naik has led to sharp criticism of the ruling Pakatan Harapan (Alliance of Hope) government led by Mahathir Mohamad in Malaysia.

The multi-racial centre-left Democratic Action Party, a major opposition party, has termed this as a reflection of the “pathetic state of public universities” in Malaysia.

One of its leading leaders P Ramasamy, the Deputy Chief Minister of Penang federal State, said the question on Naik reflected poorly on the state of academic knowledge, lecturers, course content, and the nature of public universities.

Ramasamy, who found fault with the staff responsible for teaching the course, wondered why no mention was made of Naik being wanted in India, especially by the National Investigation Agency, which is probing charges of inciting terror against him.

The latest controversy is seen as another incident which is dividing the Malaysians. Indian-origin citizens of Malaysia are feeling more alienated as his speeches have led to sharp divisions within that country.

In particular, his speech at Kota Bharu on 9 August last year was construed as a “racially-charged remark” which hurt Malaysian Chinese and Indians.

Naik said Muslim nations were not speaking against Islamophobia and the persecution of Muslims. In particular, he pointed out at the Chinese treatment of Uighurs and said the Narendra Modi government in India had created Islamophobia.

In November, Naik had alleged that Hindus in Malaysia were more loyal to Indian Prime Minister Narendra Modi than his Malaysian compatriot Mahathir Mohamad.

Malaysian online portal Malaysiakini, in a commentary, said Naik has been stoking racial tension and disunity in Malaysia. In particular, it felt hurt by Naik terming Chinese and Indian Malaysians as “old guests”.

The Islamic preacher is biting the hand that is feeding him, the portal commentary said and urged the Mohamad government to deport him back to India.

On the other hand, Naik has added fuel to the raging controversy by slapping a defamation notice — a second one in three months — on Ramasamy, who had alleged that the preacher had faked resurrection of Sri Lanka’s Liberation Tigers of Tamil Eelam.

Swarajya reported that Malaysian police were investigating alleged LTTE links of some Malaysian citizens as a move to silence people and organisations critical of the Mohamad government's decision to protect Naik.

Malaysian of Indian and Chinese origins are also worried over the importance given to Naik. Recently, he was invited to the Kuala Lumpur Summit 2019 in which he mingled with the people of various Islamic countries and talked to them.

It was here that the Malaysian Prime Minister criticised India’s Citizenship Amendment Act 2019 on the sidelines, leading to a stern rejoined by the Indian Ministry of External Affairs.

Naik has emerged as the thorn in the cordial bilateral relations between India and Malaysia, which is refusing to repatriate Naik.

The Malaysian Prime Minister has said that Naik, who has been given permanent resident status by Kuala Lumpur, has nowhere to go if he is deported.

However, Mohamad’s statement does not justify why Zakir Naik is not being handed over to India.

Of the 32 million Malaysia’s population, 61.5 per cent are Muslims, while Buddhists make up nearly 20 per cent. Christians comprise 9.2 per cent and Hindus make up 6.5 per cent.

Other religions, including Taoism and Confucianism, make up 2.5 per cent.

There are nearly three million Indian and Sri Lankans of Tamil origin living in Malaysia, who follow either Islam, Christianity, Buddhism or Hinduism.

Malaysian minorities, especially the Tamil Hindus, feel the presence of people such as Zakir Naik is only making life difficult for them in the country.