Muzaffarnagar Mahapanchayat: What It Means And Doesn't For UP 2022 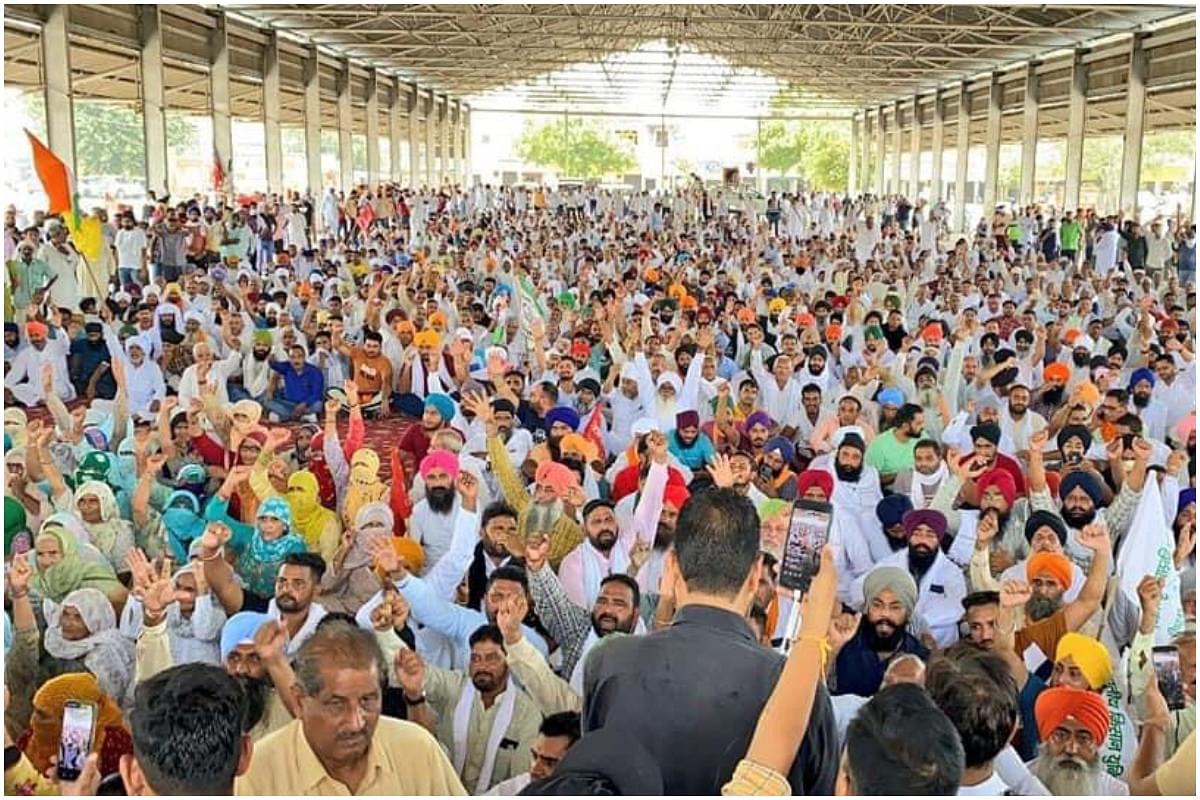 Farmers at the Muzaffarnagar Mahapanchayat.

The town of Muzaffarnagar on Sunday (6 September) saw a “mahapanchayat” at the Government Inter College grounds by the Samyukt Kisan Morcha (SKM) against the new agricultural reform laws.

The purported show of strength comes just months ahead of the Uttar Pradesh (UP) Assembly elections. SKM is the umbrella body of farmer unions that has been leading the anti-farm reforms movement over the last nine months.

Leaders of different parties announced their plan to campaign against the ruling BJP. The gathering was reportedly attended by thousands of farmers from UP, Haryana, Rajasthan, Telangana, Karnataka, Uttarakhand and other states.

According to SKM, the mission is a sustained agitation against the government to get the farm laws 'repealed' and mobilise a largescale farmer movement in the state.

While Rakesh Tikait has been hinting that his eyes are on the 2022 Assembly elections for some time now, the mahapanchayat is seen as a formal embarkment on Mission UP. The 'farmer leaders' informed that meetings will be held in Lucknow next month to draw a plan for creating an SKM unit in each district. The farm leaders are also planning mahapanchayats in Haryana and Rajasthan in the coming weeks.

As part of Mission UP, they said, more largescale gatherings will be held in the state in the run-up to the elections.

Rakesh Tikait, leader of the Bhartiya Kisan Union, in an oblique reference to the 2013 Muzaffarnagar communal riots, said, “People of UP will not tolerate (Home Minister) Amit Shah, (Prime Minister) Narendra Modi and (UP Chief Minister) Yogi Adityanath. If we have governments like this, there will be riots. This land witnessed the slogan of “Allahu Akbar, Har Har Mahadev” in the past. They talk of dividing, we speak of uniting,” he added.

Interestingly, the Muzaffarnagar riots were referenced in almost every speech. “This is the same Muzaffarnagar where rivers of blood were drawn between Hindus and Muslims. They played politics with burning houses. Someone who makes communities fight, cannot be the true son of the nation,” Swaraj India leader Yogendra Yadav said.

Rakesh Tikait accused the Centre of not reaching out to farmers since 22 January when the last round of talks was held. “They did not even express grief over the deaths of over 600 farm protesters over the last nine months. Our campaign will cover the entire country, our mission is to save the country,” he said.

He said that the Centre had “cheated the people”. “They are selling our farmlands, highways, power, LIC, banks, and corporate houses like Adani and Ambani are the buyers. Even the FCI godowns and ports are being sold. Under this government, the entire country is up for sale,” he said.

Balbir Singh Rajewal, president, BKU (Rajewal), said, “If the government doesn’t understand anything apart from vote politics, we will do ‘vote par chot’ (hit the vote). We did ‘vote par chot’ in West Bengal and the results made it clear.”

Gurnam Singh Chaduni, of BKU (Chaduni), said: “Today, you have shown the government that its roots can be shaken by gathering in such numbers. The government needs to be shaken more. Uttar Pradesh has eight crore farmer votes. We will defeat the BJP. Get candidates from amongst you and steal the political mandate from them. There should be a Mission Punjab as well. Until the time we change policy makers, nothing will happen.”

“We will hold meetings to plan agitations for sugarcane pricing. Farmers of Punjab are now getting Rs 360 per quintal for their sugarcane after the support of protesters. We have to ensure that farmers in UP get a higher amount than the present rate of Rs 325 per quintal. It is possible if we raise our voice for it,” said Dr Darshan Pal of Krantikari Kisan Union.

Ghulam Mohammad Jola, who had parted ways with the BKU in 2013 after the riots was also present on the stage. However, the 85-year-old leader didn’t address the gathering. Also, while representatives of the RLD and the SP were not present on stage, a large number of their supporters were present in the gathering with hoardings and banners. They also tried to warm up to the farmers by offering logistical support, including “langars”.

The main SP office in the town reportedly doubled up as a large community kitchen.

Other Opposition leaders also rallied behind the mahapanchayat.

“They are our “annadatas”. They keep us alive and the government does not care to listen to them,” said CPI(M) general secretary Sitaram Yechury.

While urging the government to listen to the farmers’ demands, Bahujan Samaj Party (BSP) spokesperson Sudhinder Bhadoria said, “It’s a democratic right of every citizen to have a peaceful protest and it should not be stopped by the police.”

The response of the BJP leaders to the mahapanchayat ranged from calculated outreach to accusations.

BJP MP Varun Gandhi said, “We need to start re-engaging with them in a respectful manner.” The Pilibhit MP called farmers “our own flesh and blood”, and insisted their hardships be taken into consideration.

“Lakhs of farmers have gathered in protest today, in Muzaffarnagar. They are our own flesh and blood. We need to start re-engaging with them in a respectful manner: understand their pain, their point of view and work with them in reaching common ground,” he tweeted on Sunday.

Meanwhile, BJP’s Kisan Morcha head and MP Rajkumar Chahar claimed in a statement that it is politics and not concerns for farmers which have been on the agenda of those behind the mahapanchayat. “This was very much a political and election meeting. The Opposition and these farmer union leaders have been using the shoulders of farmers to engage in politics,” he said.

Union minister Anurag Thakur pointed out that the government has held 11 rounds of talks with farmers. He also said that the government has increased the minimum support price for the benefit of farmers. Taking a veiled dig at Bharatiya Kisan Union leader Rakesh Tikait, who is spearheading the farmers’ protest, Thakur asked how many mandis have been shut down in the last two years.

Can Mahapanchayat Change The Course Of 2022 Elections?

Experts dub the choice of the venue as strategic as Muzaffarnagar used to be a stronghold of the Rashtriya Lok Dal (RLD) until the rise of the BJP which had managed to garner the support of influential khaps including those headed by Naresh Tikait and Rakesh Tikait, sons of iconic farmer leader late Mahendra Singh Tikait.

The "mahapanchayat" is, therefore, being seen as an attempt to revive the same legacy.

The aim of the 'farmer leaders' is to mobilise the influential farming communities of western UP, particularly from the Jat community. These communities since have migrated to BJP. A substantial section from this region had voted for BJP in previous elections.

Rakesh Tikait, the younger son of late Mahendra Singh Tikait, hasn't had an illustrious career as a politician.

In 2007, Rakesh Tikait contested the Uttar Pradesh Assembly election with active support from Sonia Gandhi's Congress, and finished sixth. Notably, this was his hometown Khatauli in western UP that rejected him.

In 2014, he fought the Lok Sabha election from Amroha in western UP on a Rashtriya Lok Dal ticket. The defeat was humiliating and he lost his security deposit, bagging just 9,539 votes.

Even in the current protests at the Delhi-UP Ghazipur border protest site, the farmers from Tikait’s BKU were, reportedly, till quite recently, numerically less than those mobilised by V M Singh's Rashtriya Kisan Mazdoor Sangathan.

In fact, Tikait was a forgotten man when the current protests were launched. It is also notable that Tikait had, at first, supported the three farm laws.

In the current farmer protests, Tikait has found an opportunity to revive his political fortunes. Known to be mild-mannered, Tikait has, therefore, taken a bold approach.

While he has made it clear that the current farmer protests will not just go on till 2022 (UP Assembly elections) but 2024 (next Lok Sabha elections), how much impact the protests will have on the UP elections is questionable.

It all comes down to how much the Opposition parties will be able to convert the sentiments of farmers' movements into votes, and whether the farming communities see a credible alternative in them.

Tikait has himself criticised the Opposition in the past for not being able to sufficiently challenge the ruling party, saying that that is why the farmers had to come out on the streets.

The ABP-CVoter-IANS opinion poll shows that BJP, and especially, CM Yogi Adityanath continue to be popular in the state. The major challenge for the Opposition is, therefore, to bring out leaders that can challenge the strength projected by Yogi, and the image of a party with ideological substance.

The survey showed that 40.4 per cent of the respondents chose Yogi Adityanath as the preferred CM choice, while 27.5 per cent opined in favour of SP chief Akhilesh Yadav.

Around 44 per cent of the respondents expressed satisfaction with the performance of incumbent chief minister, 18.1 per cent said they were satisfied to some extent with his performance.

The bigger question remains about the issues faced by the farmers. Of the three reform bills, the opposition really is just to one of the three laws — the Farmers’ Produce Trade and Commerce (Promotion and Facilitation) Act.

Even so, farmer groups seem to have adopted a zero-sum game approach. It is clear that the current farmer protests have become more about politics and personal ambitions, than the farmers themselves.

Whether analysts hoping that the farmers movement will create a foundation of solid challenge to a seemingly hegemonic BJP will be proven wrong or right, it seems clear that India's farmers will have to wait to have their issues addressed in a less ad-hoc and evidence-based fashion.