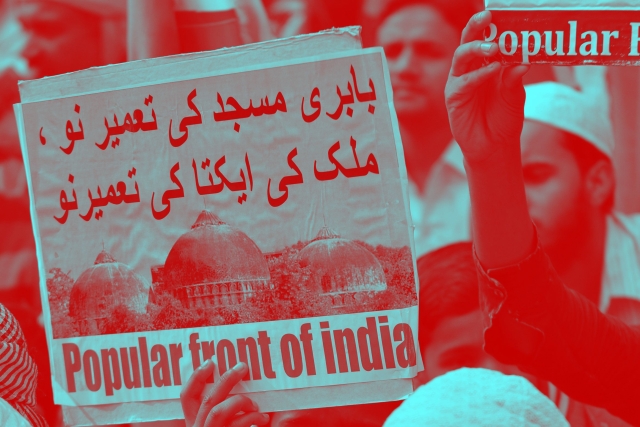 The Social Democratic Party of India (SDPI), the political face of the radical Islamist outfit Popular Front of India (PFI), has said that its volunteers have conducted the last rites of 32 novel coronavirus (Covid-19) victims in Tamil Nadu’s capital Chennai.

Times of India quoted Kareem A K Adbul, SDPI’s state committee member, as saying that the last rites of many other victims had been conducted by the party's volunteers, which represented interests of Muslims in the state.

Abdul said the SDPI, which was active in holding protests against the Citizenship Amendment Act, 2019, in Tamil Nadu and New Delhi, had begun these activities way back on 4 April this year.

It all began when a 64-year-old retired postal department employee died of Covid-19 and all his family members were quarantined in hospital. Then, SDPI north Chennai president formed a small group to perform the last rites of such families.

Abdul said the victims belonged to different religions and “their burial was done according to their beliefs”.

The report, however, was silent if the SDPI and its volunteers had been permitted to conduct the last rites. It doesn’t say if the Greater Chennai Corporation authorities had approved their services.

It is also unclear how SDPI volunteers have been allowed to conduct the last rites when even the victims’ relatives are not allowed anywhere near the body.

This development comes on the heels of SDPI’s parent organisation, PFI, being allowed to provide services to conduct the last rites of coronavirus victims in Puducherry’s Oulgaret municipality.

Political analysts say that the SDPI and PFI are conducting these burials to hide their real face and overcome criticisms of having been actively involved in the protests against CAA in December last year and January this year.

“The SDPI, in particular, is trying to feign as a do-gooder by carrying out these activities. Right from the beginning when the pandemic broke out, their leaders have been showing undue interest,” said a frontline staff involved in tackling Covid-19 spread.

The SDPI and other Muslim organisations such as Tamizhaga Muslim Munnetra Kazhagam had refused to withdraw the protests in places such as Tondiarpet even as the coronavirus pandemic set in and began to spread across the country.

Objections to allowing SDPI and PFI to carry out these activities stem from the fact that the National Investigation Agency has found the involvement of the PFI in various terrorist activities across the country.

The PFI came into limelight for a brutal act of its members chopping off a hand of T J Joseph, a lecturer from Kerala's Ernakulam district, on 4 July 2010.

The PFI has a strong presence in some 15 states and is reported to have links with the banned Students Islamic Movement of India (SIMI).

Besides SDPI, the PFI has floated many other front organisations such as Nagarik Adhikar Suraksha Samiti in West Bengal and Karnataka Forum of Dignity (KFD).

PFI has, in the past, been accused of attempting to make Kerala an Islamic state by 2030.

The organisation has been accused of spending huge sums of money to convert youth from other faiths, including through marriages.

Last year, a Pattali Makkal Katchi worker V Ramalingam was murdered by PFI cadre after he objected to a group of SDPI volunteers attempting to convert Scheduled Caste Hindus near Kumbakonam in Tamil Nadu's Nagapattinam district.

The claim by SDPI is surprising since Tamil Nadu has not reported any problem in conducting the last rites of coronavirus victims, including their cremation.

Till now, 48,019 persons have tested positive for the novel coronavirus in Tamil Nadu with 528 succumbing to the pandemic.