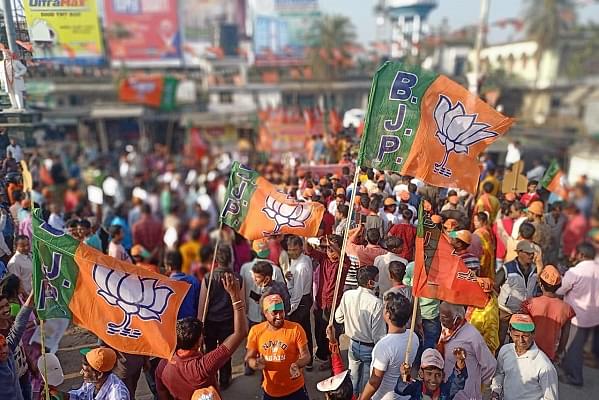 Street theatre, the old weapon to express 'resistance', seems to be erupting amid the BJP's campaign for the upcoming Assembly polls in the state as a new element in its interaction with the public.

Clips of one such theatre performance have been shared on Twitter by volunteers. They can be seen performing a play to create awareness on the sacrifices of karyakartas (workers) of the BJP who have been allegedly killed for their work and support to the party.

The volunteers can be seen and heard using Bengali, Hindi and English in the play to talk about the sacrifices of the 130 karyakartas. The issue has been raised and mentioned by senior BJP leaders on different platforms over the week.

The volunteers also mention the attack on the mother of BJP worker Gopal Majumdar, who has alleged that three TMC workers entered his house and attacked his mother in Nimta, North Dumdum, on 27 February.

#WATCH They hit me on my head and neck and punched me. They hit me on my face too. I'm scared, they asked me not to tell anyone about it. My whole body is in pain: BJP worker Gopal Majumdar's mother who was allegedly attacked by TMC workers yesterday #WestBengal pic.twitter.com/Xu23R2azan

"Pothonaatika", as the form of theatre is known in Bengal, is a potent medium to express messages of social and political importance.

For largely four decades, the form of theatre has been associated with the cultural interaction of the Left. It is widely used by Left-aligned cultural groups and organisations to raise voices on issues of social importance, on gender, and political issues.

Street theatre is widely seen as synonymous with Left-aligned politics.

The volunteers seem to depict the violence faced by BJP workers in the state, the muzzling of free speech, the attack on freedom of speech on social media and on ground and intimidation faced by the men and women volunteers from their political opponents in West Bengal.

In the above clip, the performing volunteers depict the intimidation and violence faced by BJP volunteers during their interaction with the public on the people-centric policies, works and programmes undertaken by Narendra Modi.