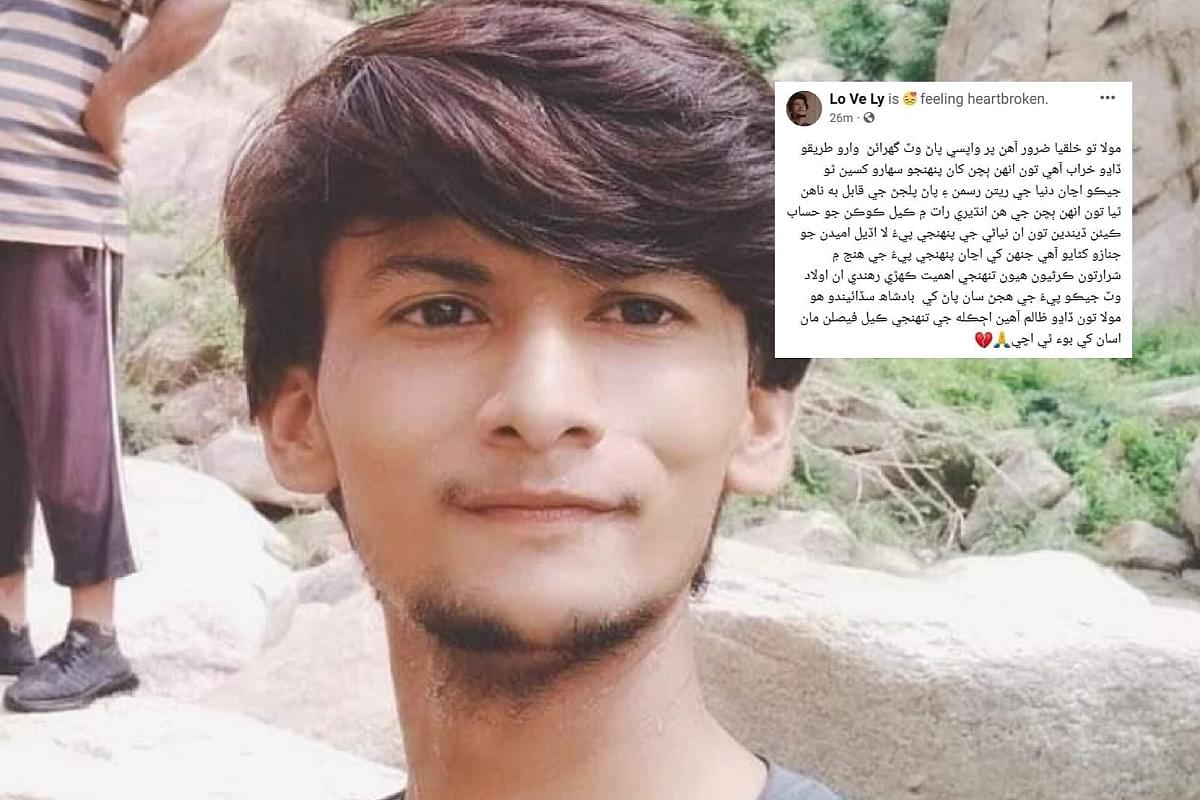 A picture of the boy.

A Hindu boy in Pakistan’s Sindh area has been in jail for a month under the country’s harsh blasphemy-related laws for using the term “maula” to criticise god in a social media post.

Zafar Sahito, who is founder of Jeay Sindh Freedom Movement, and some Sindh-based journalists, recently shared the details of the case on their social media accounts.

The boy’s name is Lovely Kumar Meghwar and he is a resident of Mithi district in Tharparkar area of Sindh province in Pakistan.

In a Facebook post on 22 November, the boy wrote this (translation from Sindhi provided by Pakistani Hindu activist Hindu Sodha Singh to Swarajya):

“Hey Maula, you have given birth to children but the way you are taking them back is not right. You are snatching children from their parents. The children are not capable of taking care of themselves. Are you not listening to their cries in the night? How will you account for those? You have killed their hopes at an age when they were supposed to play in their fathers’ lap. You are cruel.”

Sodha, who helps Pakistani Hindu migrants to travel to India through his organisation Seemant Lok Sangathan, of which he is the founder and president, is himself from Tharparkar in Sindh. He moved to India in 1971 just 10 months before the India-Pakistan war.

In his post, Sahito said that the use of the term “maula” for god is common among Sindhis and their literature, but local Islamists misused the boy’s post to make blasphemy-related allegations in order to terrorise Hindus into leaving the area.

Sahito wrote on Twitter, “That’s it, that’s his crime & now he is in jail! Already professor Nutan Kumar is in Pakistani jail since many years on blasphemy charges. This is what happening in Occupied Sindh with real owners of land Sindhi Hindus.”

The Nutan Kumar case (some reports call him Notan or Nautan), as mentioned in Sahito’s post, is of an owner and principal of a private school in Sindh’s Ghotki area who was accused in 2019 of insulting Prophet Mohammed by a student named Muhammed Ihtisham.

The accusation caused the majority community to indulge in targetted violence against Hindus and vandalise a Hindu temple. In February this year, he was sentenced to life improvement.

During the trial, a social media post by the complainant went viral where he said that he had lied about the blasphemy accusation as he had not done his homework.

Read Sahito’s tweets below. As per him, Lovely was booked under sections 298 and 153A of the Pakistan Penal Code.

From Occupied Sindh received this painful news today.
On November 22nd, 2022 this young boy âlove kumarâ was gone missing than later his family got information that he is arrested because of blasphemy charges on one of his post on Facebook he shared. 1/3@TulsiGabbard @HinduHate pic.twitter.com/i90D6TLjhG

Another Twitter user and a journalist from Karachi, Veengas, wrote, “A blasphemy charge has been made against a young Hindu boy in Tharparkar over a Facebook post wherein he had communicated with God by complaining about injustice. In Sindh, either Hindus or Muslims remember God using a different name: Mola, God, Dhari, Ishwar.”

She added, “Even our Sindhi literature is filled with such writings. People can communicate with God as it is between you and Dhari (God). Government should show its presence and protect citizens. Please, let people breathe.“

A blasphemy charge has been made against a young Hindu boy in Tharparkar over a Facebook post wherein he had communicated with God by complaining about injustice.

The British introduced the British Penal Code in 1860 in the Indian subcontinent. Given a history of Muslims throwing cow meat in Hindu temples and Hindus retaliating by throwing pig meat in mosques, Section 295 was introduced, which criminalised defilement of places of worship.

In 1920s, British India saw a spate of communal violence. In response to Muslim groups bringing out derogatory pamphlets against Hindu deities, Arya Samaji Mahashay Rajpal brought out a book named Rangila Rasool that was a satirical take on the life of Mohammad.

Complaints were filed against him, and he was jailed and tried in court. He was acquitted as the prevailing laws dealt with only religious places and speech. In 1929, a young fanatic named Ilm-ud-Din stabbed Rajpal to death.

The British went on to enact 295-A criminalising deliberate attempts to offend religious sentiments. Ilm-ud-Din is hailed in Pakistan as a “ghazi” and has streets and buildings named after him.

Both Pakistan and India retained the British penal laws after Partition and Independence in 1947. While India has not added to these religious criticism laws, Pakistan has added several more sections to them.

In the 1970s, Pakistan laws declared Ahmadis as non-Muslims. In the 1980s, military dictator Zia-ul-Haq passed 298-A which criminalised insult of companions of Mohammad.

Then, 298-B and 298-C criminalised the use of titles reserved for Mohammad (for instance, use of the word Prophet and its Arabic counterparts) and an Ahmadi calling oneself a Muslim, respectively.

Further, 295-B criminalised defiling of Quran. It is pertinent to mention here that the Punjab government recently introduced a similar bill to criminalise disrespect to Guru Granth Sahib (it was introduced as IPC section 295AA).

Pakistan further enacted 295-C that criminalises insult of Mohammad. After a few years, convictions under 295-C began to carry a mandatory death sentence.

Most of these laws in Pakistan are, in theory, religion neutral but majoritarianism ensures that non-Muslims do not make use of these laws as the majority Muslims do. Slurs against Hindus, who are a tiny minority in Pakistan, are particularly routine and blatant.

As per media reports, more than 4,000 cases have been filed in Pakistan under its various blasphemy laws since 1985. This correspondent could not find a separate figure for cases under 295-C.

While many have been given the death sentence under this law, no one has really been executed, as higher courts stay, overturn or commute the sentences given by lower courts.

This does not stop fanatics from taking law into their own hands.

Since 1992, at least 52 people facing blasphemy charges have been extra-judicially killed in Pakistan, as per reports.

Violence over blasphemy has emerged as an alarming issue also in India, where several Hindu leaders, particularly those from Arya Samaj, were killed by fanatics for blasphemy of Mohammed in the run-up to Partition.

In 2010, a college professor from Kerala, T J Joseph, was brutally attacked by a group of fanatics acting on a fatwa to chop off his limbs. The professor escaped death but was left with his hand completely severed from his arm.

In 2019, Uttar Pradesh resident Kamlesh Tiwari was hacked and shot to death in his office. Both Joseph and Tiwari were facing trial under 295-A.

Earlier this year, Kanhaiya Lal and Umesh Kolhe, both Hindus and residents of Rajasthan and Maharashtra respectively, were killed by Islamic fanatics with aid of Pakistanis over similar blasphemy accusations.

In January, a man from Gujarat named Kishen Boliya was killed in a similar manner.