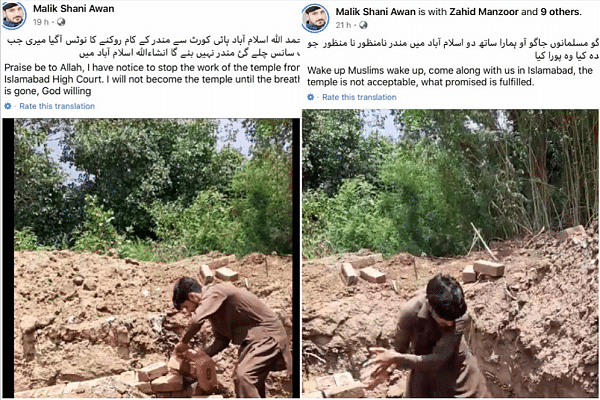 Screenshots of videos posted by the man on Facebook

A Pakistani man, purportedly a reporter with a news channel, has demolished the under-construction wall of the proposed temple in the capital city of Islamabad and posted the video on social media.

The man, Malik Shani Awan, yesterday posted a Facebook live video announcing that he, along with a group, has reached the temple site.

“By Allah’s grace, the construction of the temple has stopped,” he says. The video, watched around 6,000 times, was well-received by people as is evident from comments.

After some time, he posted a video of him removing bricks from the site. This was shared 37,000 times and viewed by more than 7 lakh people.

He posted another video of the demolished wall, with a song ‘Main Pakistan hun, main zindabad hun’ playing in the background.

The last post on his timeline is of thanking people for supporting him in this act.

The man’s bio says he is a reporter with ‘99News hd plus’ news channel in Pakistan.

It is pertinent to mention that a news channel named ‘92 News’ has been running a campaign against the temple and even claimed credit when work on it was stopped amid criticism by Islamic clerics and people in the government.

“Owing to successful efforts of 92 News, the Capital Development Authority (CDA) stopped the construction of a temple in Islamabad on Friday," the news channel said in a report titled "92 News Efforts Bear Fruit As CDA Stops Construction Of Temple In Islamabad".

Here’s a Twitter thread on the videos he posted:

See this thread. A Pakistani man demolished the under-construction wall of the proposed temple in Islamabad and proudly posted the video on Facebook with âMain Pakistan hun main zindabad hunâ song playing in the background https://t.co/HCxzbtKVlO

This is the first time a Hindu temple is being built in Islamabad post-partition. A grant of Rs 10 crore Pakistani rupees was sanctioned for it by the current Imran Khan government. However, the proposal soon ran into criticism as Islamic clerics and even people in the government opposed it calling it “un-Islamic” and “against the spirit of Pakistan”.

A leading religious school in Pakistan issued a “fatwa”, or religious edict, against the construction of the temple.

Religious parties like Jamiat Ulema-e-Islam (F) and Jamiat Ahle Hadith were also against it as according to them it was against Pakistan’s ideology.

Pervaiz Elahi, the speaker of Pakistan's Punjab assembly, said that Pakistan was created in the name of Islam and construction of a temple on its soil is against the very spirit of Islam.

Even as a Hindu member of the government, Lal Malhi, kept insisting that the temple would be built despite the opposition, its construction was halted on government orders on 3 July citing technicalities.

Islamabad is said to have around 3,000 Hindus.