Protest Against Vizhinjam Sea Port Called Off For Now 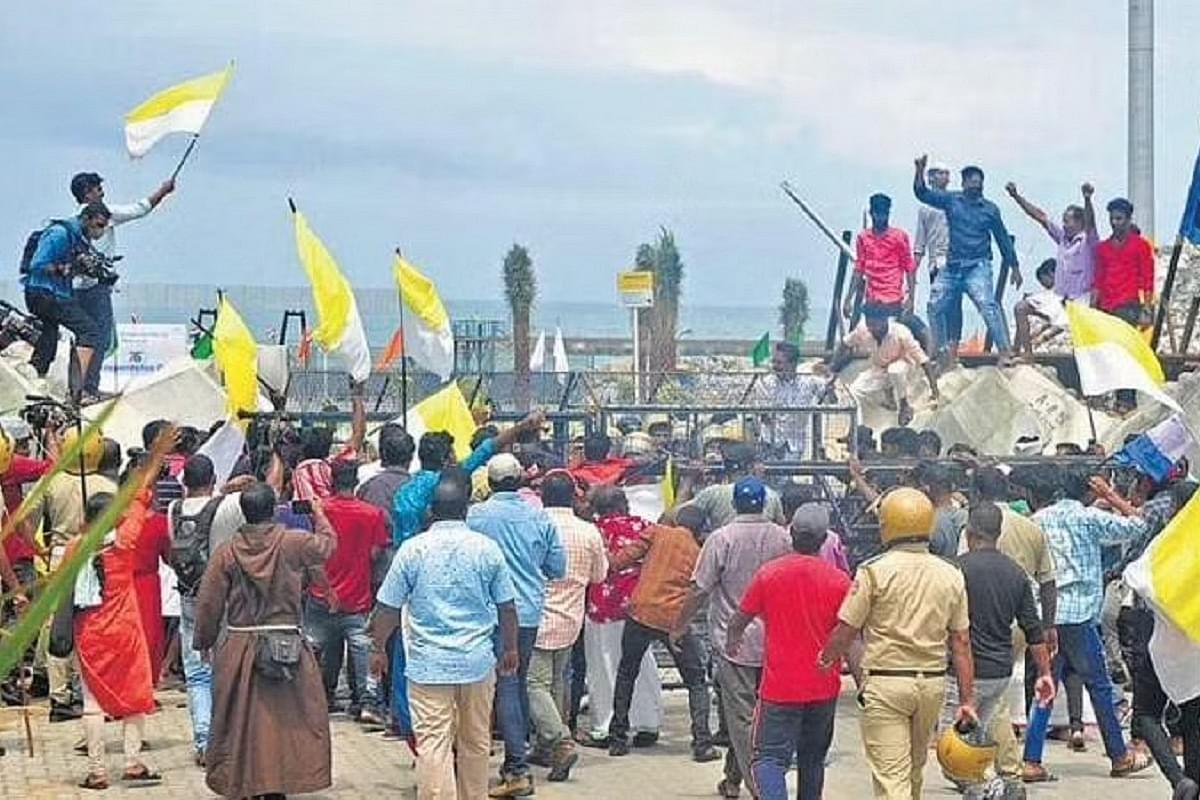 The over 130-day-long protest by fisherfolk against the under-construction Vizhinjam sea port was on Tuesday called off for now after discussions between the leaders of the agitation and Kerala Chief Minister Pinarayi Vijayan.

The calling off of the agitation was announced by Vicar General Eugene Pereira, who has been seen at the forefront of the protests.

''For now we are calling it off. Protests do not always come to an end only after achieving their objectives. Each protest has several phases. One such phase of the protest has ended in a consensus,'' Pereira told reporters after meeting the Chief Minister.

He, however, said the protest was not being called off because they were satisfied with the steps taken or promises made by the state government.

''We have not arrived at this decision because we are satisfied,'' he said and added that if required, they will take up the agitation again.

A source in the Chief Minister's Office told PTI that several rounds of discussions were held during the day before the protest was called off.

Initially, the protestors' representatives held discussions with a cabinet sub-committee after which the latter held a meeting with the CM, the source said.

Thereafter, the CM and the sub-committee met with representatives of the protestors, the source also said.

Meanwhile, a source in Adani Group, which is carrying out the port construction, told PTI that the company will commence work only after receiving an official communication from the state government.

Speaking to reporters here in the evening, Pereira said the discussions did not result in a satisfactory outcome as far as the seven demands raised by them were concerned.

He also said that while the government, at every discussion, said that a representative of the protestors would be included in the committee studying the coastal erosion in the area, no steps have been taken till now in that regard.

He further said that while the protest was being called off for now, the protestors were still sticking to their claims regarding the impact of the project on the lives and livelihood of the fisherfolk of the area.

Therefore, they were going to carry out an independent study of their own regarding the project's impact on the area and the extent or severity of the same and would inform the general public about their findings.

On the issue of the state government providing them the money for rented accommodation, for those displaced from their homes due to coastal erosion or natural disasters, Pereira said the administration has increased the amount to Rs 8,000 from the earlier Rs 5,500.

However, they decided they only wanted Rs 5,500 as the remaining amount of Rs 2,500 was going to come from the CSR fund of Adani Group, he said.

Pereira also said that the offences enumerated in the various cases, lodged against the protestors and the priests leading the agitation, were not even made out and that is why they had sought a judicial probe into the incidents of violence.

He said they plan to approach the courts for the same.

Earlier in the day, the state assembly witnessed a heated debate on the ongoing agitation against the under-construction Vizhinjam sea port project with Vijayan expressing doubts whether any external forces were controlling the stir from outside.

While the Chief Minister said the government wanted to resolve the issue amicably within the framework of law and sought the support of everyone to participate in the process, he made it clear that the massive infrastructure project would not be abandoned as it was inevitable for the development of the southern state.

The opposition, while vehemently criticising the handling of the issue by the LDF government, said they were not favouring the abandoning of the multi-crore project.

Opposition Leader V D Satheesan said the fishermen community was the one facing hardships including issues like loss of houses and means of livelihood due to coastal erosion, soaring prices of kerosene and diesel and so on.

He also expressed doubt whether there was any secret tie-up between the government and the Adani group and the recent violent incidents were part of plans to get a favorable judgement from the high court in this regard.

The CM strongly rejected the opposition charge and said several rounds of official talks had been held under the aegis of a ministerial sub-committee and a number of unofficial discussions through other channels as well.

The heated discussions took place pursuant to a notice for an adjournment motion moved by the opposition to discuss the Vizhinjam protest issue in the House.

A large number of fisherfolk have been staging demonstrations outside the main entrance of the multi-purpose seaport at nearby Mulloor for the last more than four months.

They have been pressing their seven-point charter of demands that include stopping the construction work and to conduct a coastal impact study in connection with the multi-crore project.

The agitators have been alleging the unscientific construction of groynes, the artificial sea walls as part of the upcoming port, was one of the reasons for the increasing coastal erosion.