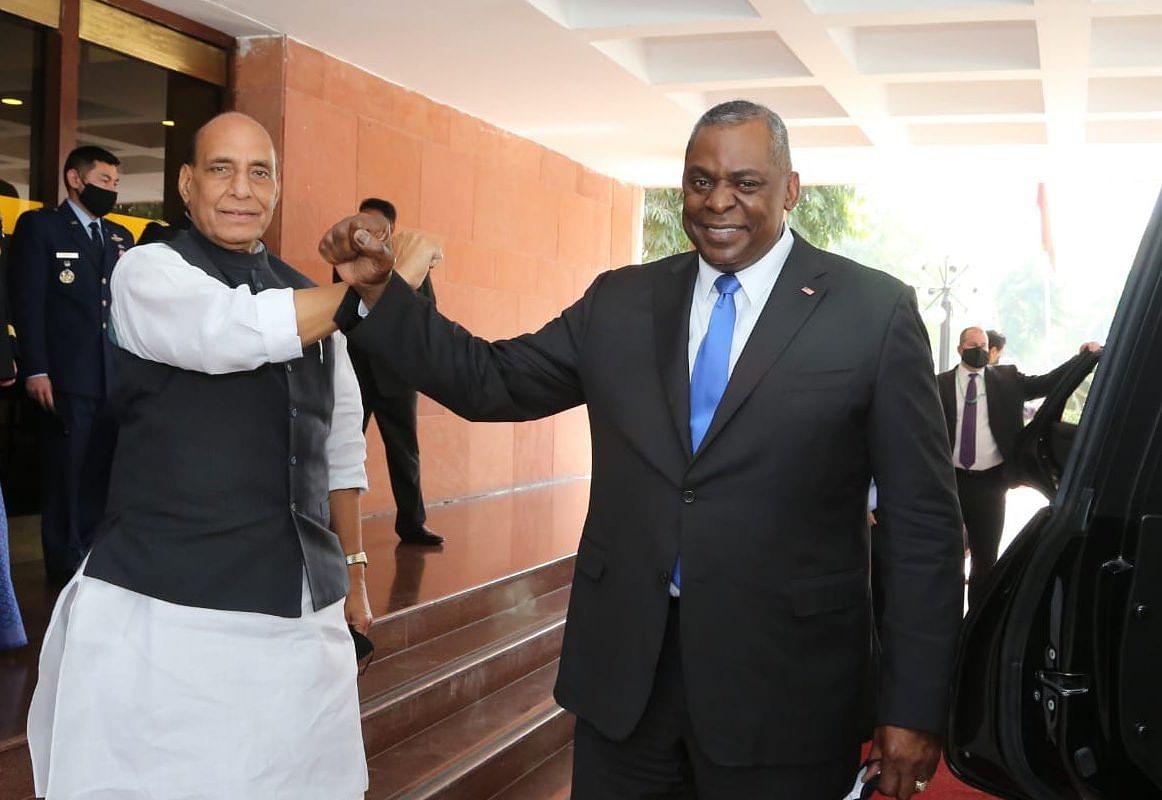 India and the US agreed to strengthen their military partnership during a meeting between Defence Minister Rajnath Singh and the US Secretary of Defence, General Lloyd Austin, held in New Delhi, according to a joint statement issued after the talks.

Singh told the media that India is committed to further strengthening its robust defence partnership with the US.

At the meeting, Singh also highlighted the opportunity for the US industry to invest in India's defence sector. "I invited the US defence industry to take advantage of India's liberalised foreign direct investment (FDI) policies in the defence sector," the Defence Minister said.

Singh, in his statement, said a range of issues were discussed with a focus on "enhancing defence information sharing, cooperation in emerging domains of defence, mutual logistics support, and expanding military-to-military engagements across services".

"We also reviewed many bilateral and multilateral exercises and agreed on increasing cooperation between the Indian military, US Indo-Pacific command, Centre Command and Africa Command. We've signed LEMOA, COMCASA & BECA agreements and we've agreed to realise their full potential," the Indian Defence Minister said. This is also in line with India's 'SAGAR' (Security and Growth for All in the Region) policy," he added.

Austin says the India partnership is a priority

"We discussed opportunities to elevate the US-India major defence partnership, which is a priority of the Biden-Harris administration. And we'll do that through regional security cooperation and military to military interactions and defence trade," the Defence Secretary said after the meeting with Singh.

The leaders pledged to work together for a free and open Indo-Pacific and to cooperate on maritime and cybersecurity in the face of challenges from China.

Austin called India "an increasingly important partner in the rapidly shifting international dynamics" and reaffirmed his country's commitment to a "comprehensive forward-looking defence partnership with India" for its approach to the Indo-Pacific region.

"Our relationship is a stronghold of a free and open Indo-Pacific region. PM Modi stated India stands for freedom of navigation and freedom of overflight, unimpeded lawful commerce in adherence to international law. This reaffirms our shared vision for regional security," Austin said.

His maiden visit is significant as it comes within a week of the summit between the heads of state of Quad countries US, India, Australia and Japan.

Both countries have increased defence partnership in recent years. India signed four key defence pacts with the US in the past few years. The Communications Compatibility and Security Agreement (COMCASA) in 2018 enhanced information sharing and interoperability. The Industrial Security Annex (ISA), signed in December 2019, allows for the transfer of technologies in support of defence production. The Basic Exchange and Cooperation Agreement (BECA) is for sharing unclassified geospatial information.

The top US defence official landed in New Delhi on Friday evening as part of the Biden administration's efforts to forge an alliance of countries seeking to push back against China's assertiveness in the region. He met Prime Minister Narendra Modi and National Security Advisor soon after.

According to the Hindustan Times, the two-hour-long meeting between Secretary Austin and NSA Doval was very positive with both leaders exchanging notes on the security environment in Asia and beyond.

"It is in American interest that there is a favourable balance of power in Asia in face of a militarily assertive China. Washington needs to join hands with countries like India whose territorial integrity is being challenged by Beijing," a former Indian foreign secretary told the daily.

India has substantially increased its acquisition of US defence equipment, with Indian forces operating US-sourced platforms such as P-8s, C-130Js, C-17s, AH-64s, CH-47s, Precision Guided-Excalibur Munitions, and M777 howitzers. In February, India agreed to acquire Apache and MH-60R multi-mission helicopters worth $3.1 billion, and is considering other US systems.

A deal for 30 armed drones, 10 each for the army, air force, and navy, pegged at over $3 billion, is close to being approved by the Indian defense ministry. In November 2020, the Indian Navy acquired two Sea Guardian unarmed drones from the U.S. on a one-year lease. India has plans also to buy six additional P-8I long range maritime patrol aircraft in addition to the 12 already contracted.

Experts believe that the trajectory of Indo-US relations under President Biden could well turn out to be more consistent, smoother and stronger because India is poised to play a central role in the US's Indo-Pacific strategy given its big professional armed forces, large economy and its aim of resisting China's unfair policies.