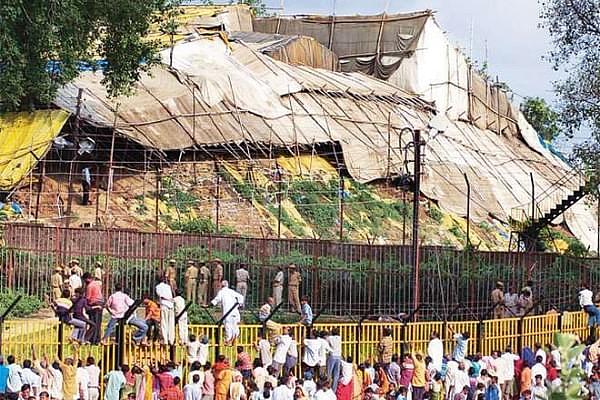 Puducherry-based Aurobindo Ashram has made a written submission in the Supreme Court that it is withdrawing its offer to give away three acres of its land in Ayodhya for the settlement of the Ram temple dispute.

The submission was made during the weekend, according to sources close to Aurobindo Ashram.

Media reports said that on 16 October this year, the Aurobindo Ashram has offered its land for the setting up of a national institute for social harmony. It was also the day when the Supreme Court reserved its judgement on the Ram Janambhoomi-Babri Masjid dispute case.

In its second status report, the panel had reportedly said “some sort of settlement has been reached” between the disputing Hindu and Muslim parties.

In its first report, the panel told the apex court that it was unable to convince any of the disputing parties to arrive at some settlement or understanding. The Supreme Court set up the mediation panel in March this year to find an amicable settlement.

Hindus and Muslims are claiming rights over the land over which a sixteenth century mosque was built before it was demolished in December 1992 during the Ram Janambhoomi agitation.

Then, the local court said that Muslims, Nirmohi Akhara - which claims to represent the Hindus - and Ram Lalla (or the child form of Lord Ram’s idol) were joint holders of the disputed site.

The case went on appeal to the Allahabad High Court, which in September 2010 ruled for an equal tripartite division of the land among the Sunni Waqf Board representing the Muslims, the Nirmohi Akhara and Ram Lalla.

During the hearing of the appeal, the Allahabad High Court ordered an underground survey of the site where Babri Masjid earlier stood. The survey, carried out by a private firm, revealed the presence of an earlier structure beneath. A report was submitted to the court in February 2003.

In March 2003 based on the report, the High Court asked the Archaeological Survey of India (ASI) to excavate the disputed site and ascertain if the Babri Masjid was built on a temple that existed earlier.

In its 2003 August report, the ASI submitted its report to the court that evidence of a structure similar to a north Indian temple was found beneath the Babri Masjid building.

This report formed the basis of the Allahabad High Court's majority conclusion that a temple existed before the Babri Masjid was constructed at the disputed site. This has given an advantage to the Nirmohi Akhara and Ram Lalla in the dispute.

Even while accepting the mediation panel’s first report, the Supreme Court asked the three mediators to continue their efforts in finding a solution. While the apex court began day-to-day hearings on the Ayodhya dispute, the mediation panel looked for further ways to find a settlement.

During this period, one of the members of the mediation panel took advantage of his proximity to the Aurobindo Ashram and made its managing director Manoj Das Gupta to come up with the offer.

The ashram runs Sri Aurobindo Sadhnalaya at Ramkot in Ayodhya which is next to the disputed site. It is this place that Aurobindo Ashram officials offered to donate, but not without courting controversy.

“I would allege that the member misused the trust the ashram administrators had in him,” said a source with access to the officials.

According to sources, the mediation panel member also took advantage of one of the key ashram contacts in New Delhi being away from the country for six days. “The ashram contact was its ‘go to’ man in the capital and he was unavailable for discussions then,” the sources said.

The revelation of the panel’s submission shocked the Hindu side. “There is no guarantee that the ashram’s premises will not be used to construct a mosque next to the proposed Ram temple. If that happens, then it will lead to problems perennially in that region,” a contact on the disputing Hindu parties said.

Those opposing the donation of the ashram premises have two suggestions on how to utilise it. One suggestion is to use it as a place for those coming to the proposed temple to take rest.

The other view is for the ashram to continue holding its possession since holy relics of Sri Aurobindo and Mother are kept at the Sadhanalaya.

Aurobindo Ashram devotees point out that given the strong views of their spiritual guru and the Mother on Hinduism, it would not have been a wise move to offer the Ayodhya premises, especially if it were to pave way for constructing a mosque.

On the other hand, the mediation panel was accused of leaking the second report by the Muslim parties. They also disputed claims that the Sunni Waqf Board is willing to withdraw its claim on the disputed site.

Even as these controversies dog the media, the Supreme Court judgement on the dispute is expected anytime before 18 November, when Chief Justice Ranjan Gogoi is set to retire.