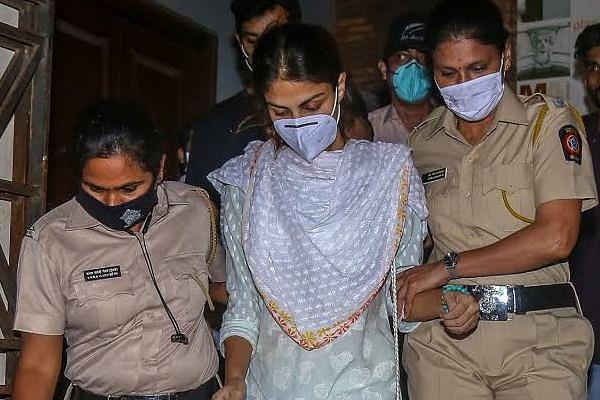 The bail granted to Rhea Chakraborty by Bombay High Court last year was challenged by the Narcotics Control Bureau (NCB) in Supreme Court, reports NDTV. The case will be heard on Thursday.

Chakraborty was arrested last year for allegedly procuring the drugs used by Sushant Singh Rajput, her boyfriend at the time. After a month, she was granted bail with conditions - signing a Rs 1 lakh bond and not leaving the country without the court's permission.

In the chargesheet filed by the NCB earlier this month before a special court in Mumbai, both Rhea and her brother Showik Chakraborty have been named along with 31 other people.

The document runs 12,000 pages and had recorded statements of more than 200 witnesses. It accuses Rhea of being "an active member of a drugs syndicate" and financing the narcotics used by Sushant Singh Rajput.

Rajput was found dead in his Mumbai apartment on 14 June last year. He allegedly died by suicide.

Reportedly, CBI is investigating the circumstances of Sushant Singh Rajput's death and the Enforcement Directorate is looking into financial allegations raised by the actor's father.

Rhea has claimed that she is innocent. Her lawyer said that the entire amount of narcotic substances recovered against the 33 accused are nothing compared to “what even a constable in Mumbai Police or Narcotics Cell or the Airport Customs or other agencies recover from one raid or trap."

Chakraborty also argued that the charges against her were too severe compared to the quantity of the drugs involved. She accused the drugs probe agency of spinning a false narrative that she was involved in illegal drugs trafficking and "harboured offenders".

She alleged that while she tried to get Sushant Singh Rajput free from drugs, he "took advantage of those closest to him to sustain his drug habit".

She also said he was diagnosed with bipolar disorder and his family abandoned him at the peak of his depression. His mental health "deteriorated during the lockdown", she claimed, adding that the deaths of actors Irrfan Khan and Rishi Kapoor also had a tremendous impact on him.